First Rush Limbaugh, now the Washington Post women's blog, claim the GOP was set up by its enemies on birth control 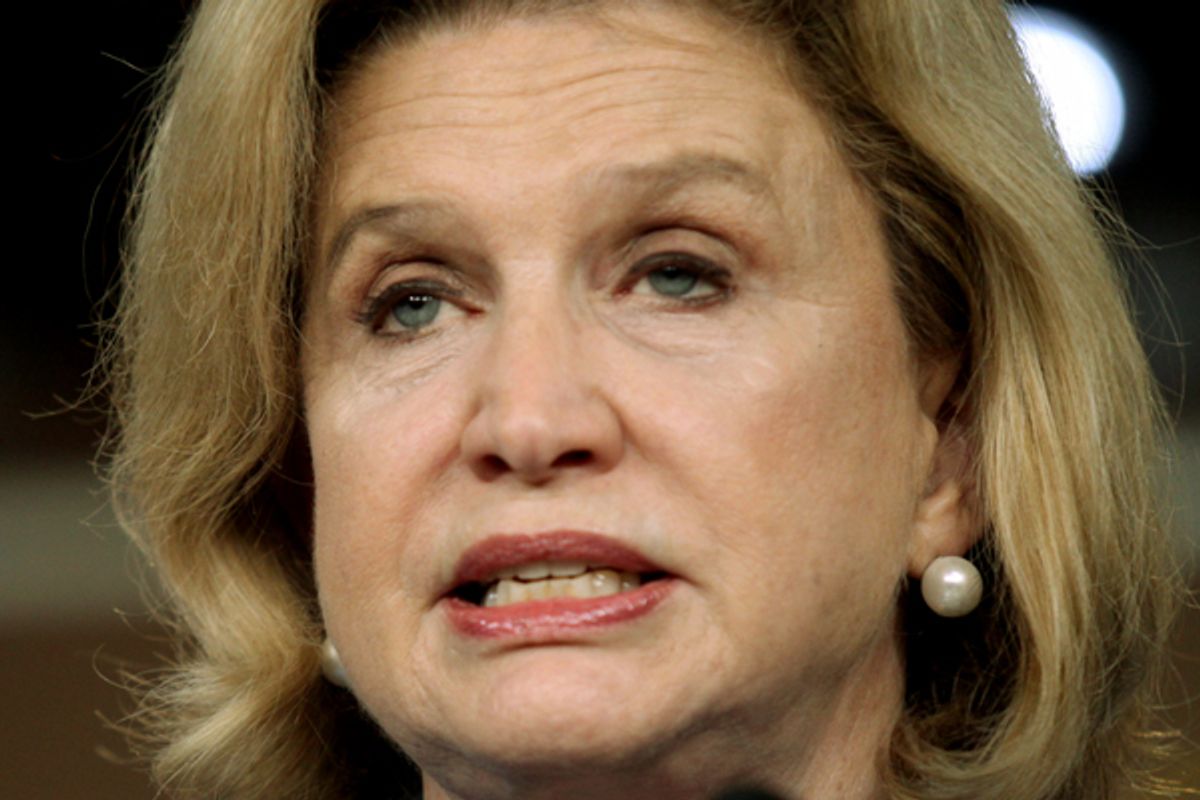 Did you know the GOP doesn't want to be talking about contraception? That it's an issue ginned up by opportunistic Democrats? Rush Limbaugh made that case last week (while also insisting Republicans would win an election decided on culture war issues, so I'm not sure what his problem was). But Wednesday it made its way to the Washington Post's women's blog, in a piece by Melinda Henneberger headlined: "It's Democrats who are putting focus on birth control."

Now, Henneberger is not a Republican. She's a sorta-liberal, a veteran of the New York Times, Huffington Post, Slate and Politics Daily, who too often gives Republicans the benefit of the doubt, particularly when it comes to reproductive health issues. She emerged as a leading voice criticizing President Obama's decision to require all employers, even religiously affiliated ones (though not churches) to provide contraception coverage in health insurance policies. You know my stand on that. But her questionable views on the politics of birth control got my attention a few weeks earlier, when she carried water for Rick Santorum and let him whine in an interview that Salon's Irin Carmon had been unfair to him in her piece "Rick Santorum is coming for your birth control."

Santorum told Henneberger: "The idea I’m coming after your birth control is absurd. I was making a statement about my moral beliefs, but I won’t impose them on anyone else in this case." Henneberger sided with him against Carmon. "If that’s the cleanest shot you’ve got, you might want to wait until a better one comes along," she wrote.

OK, let's stipulate: Rick Santorum isn't personally coming for your birth control -- in the sense of going into your nightstand and taking out your pills, your condoms or anything else you have there to prevent pregnancy (not even the aspirin that his moneyman Foster Friess would like you to put between your knees, ladies). But Santorum has not only made clear he believes contraception is morally wrong, he has called it "an important public policy issue" in his now infamous conversation with caffeinatedthoughts.com. That's where he said, "One of the things I will talk about, that no president has talked about before, is, I think, the dangers of contraception in this country,” calling it "not okay," and "a license to do things in a sexual realm that is counter to how things are supposed to be." Excuse me if I don't trust that he'll keep his benighted views to himself.

Santorum also confirmed to ABC's Jake Tapper that he opposes the Supreme Court decision in Griswold vs. Connecticut that made state contraception-bans unconstitutional.  That's pretty far out there: Even conservative Supreme Court Justices John Roberts and Samuel Alito backed Griswold in their confirmation hearings. But Santorum told Henneberger that he only opposed Griswold because he believed "states have the right to pass even dumb laws," and he elaborated: "It could have been a law against buying shoestrings; that it was contraception has nothing to do with it." Um, sure.

Now that Santorum is catching hell for his extremist views on matters of women's health, he's turning up the volume on his insistence that he wouldn't ban birth control. "My position is birth control can and should be available," he said in Ohio last week.  And again, Henneberger is suggesting Democrats are overreaching by portraying the former Pennsylvania senator as an anti-contraception crusader. She quotes Santorum's "longtime media consultant and friend" John Brabender complaining,  "No one is making birth control a topic. It’s not an agenda that anyone’s running on. But it’s a distortion that works to [the other side’s] benefit to imply we’re for limiting access to birth control."

Henneberger agrees. "When I looked back at a tape of what Republicans have been saying on the topic, what’s striking is how reluctant they are to go there." She says the "contraception lobby" is firing up outrage to raise money. And again, she defends Santorum and notes that he only wants to defund Planned Parenthood – he's even voted in the past for Title X family planning funds. (Actually, here's what he said to Fox: "I support Title X, I guess it is, and have voted for contraception and although I don't think it works, I think it's harmful to women, I think it's harmful to our society.")

First of all, Santorum's website says he will "Repeal Clinton-era Title X family planning regulations, and will direct HHS to restore the separation of Title X family planning from abortion practices and restore a ban on referrals for abortion."  But federal law already prohibits Title X from funding abortion. So I'm not sure what he's repealing. Santorum is also pushing to make sure Planned Parenthood can't get Title X funding, which Henneberger implies is no big interference with contraception access. The fact is, 575 Planned Parenthood clinics get those federal family planning funds – in some states and counties, it's the only agency providing Title X services. So defunding Planned Parenthood because a separate arm of the organization provides abortion services hits Title X, and hard. Santorum's plan would also keep Title X money out of health centers or hospitals or agencies that perform abortions, even when they're medically necessary. So, sorry, John Brabender, your candidate is "for limiting access to birth control." Severely, as Mitt Romney might say.

Santorum also supports various state "personhood" amendments, which would ban many forms of birth control, including the pill, IUD, the ring and the so-called morning after pill, because they can interfere with a fertilized egg implanting in the uterus. It's true that some personhood proponents say the measures won't ban the pill, while other personhood backers happily insist they will. The laws are written so broadly that no one knows exactly what they'll do. That's why former Mississippi Gov. Haley Barbour, no fan of the "contraception lobby," opposed his state's personhood legislation. But Santorum and the entire GOP field support it (Romney, typically, has been unclear about exactly which version he backs).

So honestly, I find it stunning that anyone is arguing that it's Democrats who are "putting focus" on this issue and then profiting from it, politically or financially.  President Obama followed the advice of the Institute of Medicine and required insurers to include no-cost contraception under the Affordable Care Act, because it's best for women's health and it also saves money. It was Republicans who politicized the issue, even after the president compromised with Catholic groups and took religious agencies out of the middle of the exchange. House Speaker John Boehner and Senate Minority Leader Mitch McConnell lined up behind bills to repeal that requirement – Santorum and every GOP presidential candidate support their efforts -- even though federal law mandates that insurance plans include all sorts of medical treatment. Democrats didn't make them single out contraception as a mandated benefit.

Democrats also didn't tell GOP Rep. Darrell Issa to hold a hearing on the issue – and to leave women off the opening panel entirely. Yes, Emily's List is raising money on Issa's blunder, with an ad featuring Rep. Carolyn Maloney asking Issa sternly "Where are the women?" It's a good ad, but Issa and crew provided the visuals willingly.

Likewise, Democrats didn't concoct the trend of requiring women seeking legal abortion to be harassed by undergoing an ultrasound first. The news that Virginia's version of that law would mandate a creepy transvaginal ultrasound shocked the nation – and Wednesday Gov. Bob McDonnell says he won't sign a bill mandating that forced penetration. That's progress – and women's rights groups and Democrats achieved it, by publicizing the Virginia GOP's overreach.

Are Democrats and women's groups capitalizing on the political opportunity these backward Republicans are providing? Absolutely, as well they should. But we should be clear: To say, "It's Democrats who are putting focus on contraception" is a distortion. On "Hardball" today, Henneberger, to her credit, backed away from the language about the "contraception lobby" that she used in her Post piece, and said about Democrats and women's groups, "it's no outrage to raise money." You can watch our conversation here: