The president's energy speech calls for a review of his record. He gets a B+ overall, but an F on climate change 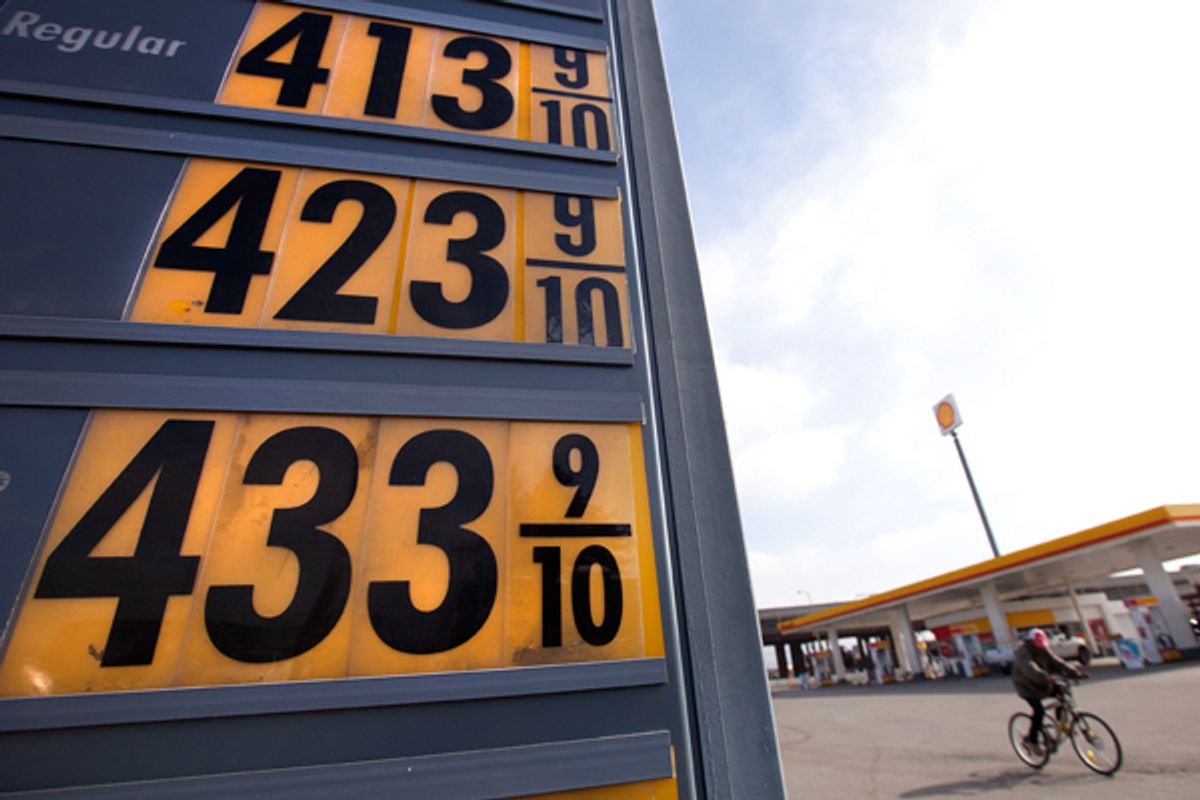 Looking for the biggest threat to Obama's reelection? Hint: It's probably not Mitt Romney, Rick Santorum, Newt Gingrich or Ron Paul. The president's most lethal opponent lurks wherever you choose to fill up your gas tank: high gas prices.

This week, the average price of a gallon of gas in the United States hit $3.57. That's the highest prices have ever been in February, a fact that is all the more sobering when one considers that prices usually rise in the summer, so more pain is likely on the way. And while it has been reasonably well-established that high gas prices, in and of themselves, don't necessarily sound the death knell for an incumbent, there is definitely a link between the cost of energy and the health of the economy. And since the health of the economy this summer will probably be the single most important factor determining who wins the White House, the equation becomes pretty simple. If high gas prices derail the current economic recovery, Obama becomes more vulnerable.

The hard political and economic truth of spiking energy prices explains why President Obama gave a speech in Miami on Thursday recapitulating his energy plan and why Newt Gingrich just recorded a 30-minute advertisement laying out his own energy strategy. As long as prices keep rising, Republicans will blame Obama for the pain, and they will blithely promise, should they be elected, to magically lower gas prices right back down.

But as the president himself declared in Miami, "It's the easiest thing in the world to make election-year promises to lower gas prices." The reality is that it is completely unrealistic to believe that any president has the capacity to meaningfully affect the price of gas in the short term.

"Anybody who tells you that we can drill our way out of this problem doesn't know what they are talking about or isn't telling the truth," said Obama, and he's absolutely right. Gas prices track the cost of oil, and the price of oil is determined by worldwide trends in supply and demand, geopolitical tensions, oil futures speculation, and the overall health of the global economy. For example, the current spike in prices is largely attributed to traders speculating that international pressure on Iran will devolve into a military debacle that closes the Straits of Hormuz and cuts off a significant portion of the world's oil.

But more generally, the emergence of oil-hungry developing nations is the real long-term driver of higher gas prices. How fast the Chinese economy is growing is far more important to the price of oil than anything the White House can do.

In his speech, Obama hinted at a long-term plan to bring gas prices down, but even that goal is just as illusory as the quick-fix solutions proposed by his Republican opponents. As Chinese and Indians and Brazilians buy more cars and the cost of exploiting new sources of oil continues to rise, gas prices will generally trend up.

In light of that brute reality, perhaps the best way to judge Obama's energy record is in the context of how well he has prepared the United States for that future.

His record here is mixed, a consequence of the tricky intersection of energy and environmental policy. For example, Obama loves to tout the fact that oil production in the United States has risen each year of his administration and now sits at an eight-year high. He stressed that point once again during his Miami speech (although interestingly, he received zero applause from the audience when he announced how aggressively his administration was opening up new offshore and onshore acreage for exploration and development, and how many new pipelines -- "even one from Canada!" -- he boasted -- his administration has approved).

But rising levels of production now are really the consequence of decisions made long before Obama took office. And arguably, some of Obama's current proposals and actions will work in the opposite direction. Environmentalists applaud Obama's decisions to nix (at least temporarily) the Keystone XL pipeline and his proposal to eliminate tax subsidies to oil companies. In Miami, Obama got a big cheer from the crowd when he raged against the oil subsidy machine, but there's no getting around the fact that those subsidies make it more profitable and attractive for international oil companies to drill in American waters. They are part of the explanation for why production has grown every year in Obama's term, and eliminating them -- in conjunction with another Obama proposal to raise royalty rates charged on oil company production -- will make a difference in domestic production.

From an environmental perspective, discouraging Big Oil from exploiting U.S. resources is a great thing, but in the context of Obama's "all-of-the-above" approach to developing every possible form of energy, they speak to a bit of a contradiction. Obama wants to have it all -- to placate his environmentalist base while boasting of ever-higher domestic oil production. Even for a politician as skilled as he is, that's a tough balancing act.

On the unambiguously plus side of the ledger, Obama is responsible for several strategic initiatives that have important positive implications for car-addicted Americans. The stimulus included $2.5 billion that was funneled to around 30 companies working on advanced battery technologies, an example of targeted industrial policy that has helped revive the Michigan economy and could potentially position the United States to be a major player in a hybrid/electric car-dominated future. The White house has also raised fuel economy standards, not once, but twice -- a move that will surely force automakers to manufacture increasingly fuel-efficient cars.

Such efforts won't solve the energy crisis, but they will help make energy costs a relatively smaller part of the American household budget, and thus insulate us from the pain of the next oil shock. In fact, that's already happening. American gasoline consumption has steadily dropped throughout Obama's term, because we're driving fewer miles in more fuel-efficient cars. If, as Obama promised, the average American car will get 55 miles per gallon by the middle of the next decade, that could prove to be one of the president's most important lasting legacies.

However, on the single most important component of any long-term energy policy strategy -- a comprehensive carbon tax or cap-and-trade system that would force investment away from fossil fuel exploitation and into renewable energy -- Obama's record is abysmal. One can argue that legislation aimed at restricting greenhouse gas emissions never would have had any chance at passing Congress, but that doesn't change the fact that Obama dedicated zero political capital to the challenge. Quite the opposite: The longer Obama has been in office, the less he has mentioned climate change. In his speech at Miami, I didn't hear him say the words once. Imagine that: a speech on energy policy that did not touch on the most important energy issue on the planet.

Obama launched some vigorous attacks at his Republican opponents in his speech, but his own record of simultaneously touting enhanced oil production while promising to cut subsidies to oil companies, promising long-term relief on gas prices while ignoring the long-term challenge of climate change, mocking the "drill, drill, drill" "bumper sticker" of the GOP while touting a we-can-have-it-all "all-of-the-above" energy exploitation smorgasbord, exposes his own energy stance as fundamentally political. His speech was nowhere near as gratuitously hypocritical as the blatant falsehoods spewed by his opponents, but he still proved himself unwilling to grapple with the real menace: High gas prices are not the problem. Higher temperatures are.