Stop comparing everything to "Portlandia"

Need to describe something quirky? For the New York Times and others, it's easy -- just say it's like "Portlandia" 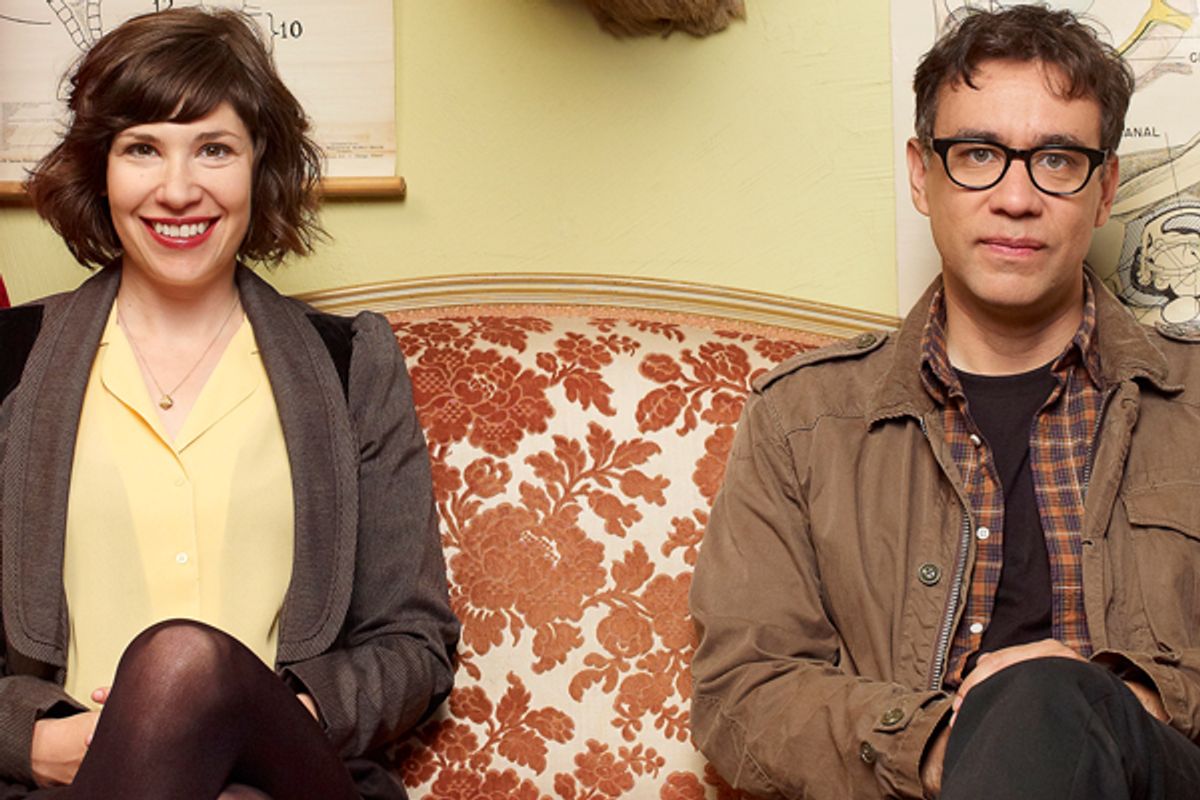 Adam Davidson might be a dangerous hack, but in the New York Times Magazine last week, he managed one impressive feat: He wrote about artisan picklers and beef-jerky makers and did not make a single reference to "Portlandia," the Independent Film Channel's comedy show that satirizes urban hipsters.

That's a trick lots of other Times writers can't claim; the Times has described everything from children's books to Brooklyn restaurants with a "Portlandia" adjective.

But they're hardly the only writers obsessed with comparing things to the comedy show. From GQ and New York magazine to Gawker -- and whether writing about arrests for public sex, coffee shops across America, or combination bike fair/film festivals -- "Portlandia" has become a lazy shorthand for oddball, quirky cool. And no, don't say that should be a "Portlandia" sketch.

"Portlandia" in the New York Times

Calyer, a restaurant in New York

One red (wine) is described as ''textured and bright with hints of volcano.'' Those who like this sort of thing will find Calyer endearing. Those who don't will be sure they've stumbled onto the set of ''Portlandia: East.'' (Jan. 25, 2012)

A park in Portland

Trying to locate this year's fifth annual Pie Off in Laurelhurst Park in Portland, Ore., was like a sketch from the TV show "Portlandia": first you had to pass by what was billed (in chalk on the asphalt path) as an "organic free-range wedding," then a free performance of Shakespeare's "Much Ado About Nothing." (T Magazine, Aug. 2, 2011)

Goings-on at a rich person's estate in the Hamptons

If it all seems like an episode of ''Portlandia,'' the arch sendup of Northern left coast culture featuring an ad agency where employees navigate Frisbee mazes and ideate in hot-air balloons, that's no mistake. (July 27, 2011)

Coffee shops in Oregon that aren't even in Portland

Later, I'd see the same barista manning the counter and squeegeeing condensation from the windows at the Blue Scorcher Bakery Cafe, in downtown Astoria, an organic, vegetarian cooperative with a quixotic magazine rack. Viewed through cynical eyes, the coffee shop might look like fodder for the satirical television series ''Portlandia,'' which pokes fun at the region's cultural quirks and earnest, progressive ideals. (March 25, 2011)

Things in Portland, as described by the city's daily paper, the Portland Oregonian

It sounds like a "Portlandia" sketch, but the "Quick 'N' Dirty" Puppet Slam is for real.

It's an event so steeped in the eccentric ways of our fair city that it almost seems like something cooked up by the spoofmeisters of "Portlandia": Scores -- nay, hundreds -- of bicyclists turning a modest commercial intersection into a spontaneous springtime fair, with craft beers flowing, DJs spinning, bikes and bikewear being flaunted, bike gear being raffled off, and, most importantly, independent short films about the world  -- nay, the universe -- of bicycling screening in a theater just steps from the action.

Although it seems like something from a "Portlandia" sketch, "The Pedal Powered Talk Show" is the real deal.

RadCat cat toys: These handmade pillows, collars and toys are made with recycled, vintage materials and are "Portlandia-style cute" ...

Highfalutin grilled cheese sandwiches, coffee-geek coffee, and craft beer together at last. Yes, it sounds like a "Portlandia" parody, but we're not ashamed to admit that we like it. (New York magazine)

What with its devotion to today's locavore and organic philosophies, 24 Diner could star in an episode of "Portlandia": it's very serious about what it does. (Texas Monthly)

From its top-notch farmers market on Wednesday evenings and Saturday mornings, to its "Portlandia"-(t)ype "Is it local? Yes, it's local" menu options, you pretty much can't miss, anywhere you hit. (Colorado Springs Independent)

But this isn't just some dutiful, farmy, "Portlandia"-esque ideal ...  (GQ)

This is the third year of the Cochon 555 tour, a production of Atlanta-based pig promoter Brady Lowe, which hit Los Angeles for the first time this year. The strip-club fracas after last year's Oregon event, which began when a renowned local chef objected to the trophy awarded to an Iowan pig and ended at 2 a.m. with tasers, contusions, arrests and Lowe's broken leg, could have been a sketch from "Portlandia." (LA Weekly)

Billed as a "retail relaxation station," Oasis carries everything from terrariums by Twig to bespoke lemonade by Sips and Bites to vegan beauty by Meow Meow Tweet, which sounds like a "Portlandia" sketch but is actually a line of handmade apothecary products. (Racked NY)

IFC also has another clip for you, but you have to "like" "Portlandia" on Facebook before you can actually watch it. Which, ironically, seems like something out of a "Portlandia" sketch. (Crushable)

Of course, not everyone finds the city's oddballs so charming. When the website Deadline Hollywood first posted about "Portlandia," it inspired such ultraserious rants that it could've been a "Portlandia" sketch in itself. (Los Angeles Times)

A Portland couple was arrested last night and accused of disorderly conduct after police heard multiple reports that a woman was "tied up in a car with duct tape over her mouth."

The police thought they were dealing with a potential kidnapping case. Turns out the captive was just enjoying Valentine's Day with her loving boyfriend.

The story reads something like a discarded "Portlandia" plot line-complete with a Subaru cameo. (Gawker)

"I personally liked it because we've been doing ukulele covers of Vanilla Ice on tour for years and years. It's great, like, seeing the master," says a local and possible "Portlandia" extra. (Curbed LA)

Sometimes things get almost too Portlandy, as though the characters from the brilliant TV satire "Portlandia" have gotten lost in Narnia. (New York Times)

Colin Meloy and Carson Ellis themselves

(As) they walk along the road in Forest Park, they could pass for the king and queen of Portlandia. (Portland Oregonian)

She's sort of a hyper-ethical eco-mother, the type of individual who could easily be lampooned on "Portlandia," even though she calls Vancouver, B.C., home. (Seattle Weekly)

The very phrase seems somehow so very Portland, as if would inspire writers for the "Portlandia" TV show to immediately stand up and take notice: an urban barn raising. (Portland Architecture)

Media criticism about coverage of Portland

And we were all over it when The Wall Street Journal did a profile/real-estate story on Stumptown Coffee founder Duane Sorenson of Portland and managed to out-Portland "Portlandia," the IFC show which purports to poke gentle fun at the city's people but couldn't have come up with a guy like Sorenson on a bet. (Seattle Weekly)