The latest lies in the war on choice 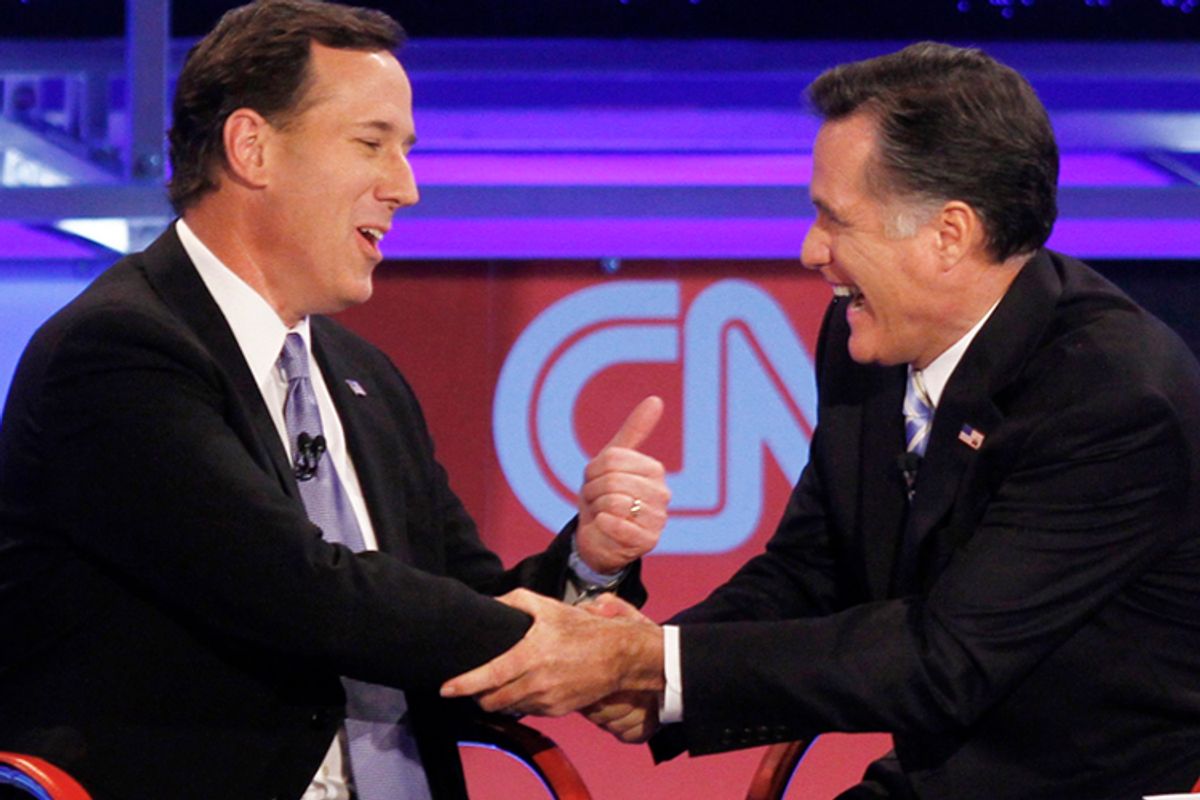 Why did the audience groan when John King asked in last night's CNN debate whether the Republican candidates believe in contraception? It probably wasn't because it was an asinine formulation ("Since birth control is the latest hot topic, which candidate believes in birth control, and if not, why?" as if birth control were a unicorn). It's likely because the audience seems to have realized that it's not a good look for Republicans to be so obviously engaged in curtailing women's rights -- which is why the candidates, or at least Rick Santorum and Mitt Romney, started talking about "out of wedlock" births. And though linking births outside marriage to contraception may have seemed like a non sequitur, it wasn't.

Santorum said, "What we're seeing is a problem in our culture with respect to children being raised by children, children being raised out of wedlock, and the impact on society economically, the impact on society with respect to drug use and all -- a host of other things when children have children." And Romney, having started with a by now halfhearted defense of "religion freedom," jumped in eagerly to defend abstinence-only education and say, "We have to have a president who's willing to say that the best opportunity an individual can give to their unborn child is an opportunity to be born in a home with a mother and a father." Bonus points for raising the specter of abortion when asked about contraception. (By comparison, Ron Paul sounded halfway sane when he said immorality, not birth control pills, kills families. Or something.)

You might wonder if contraception isn't logically a way to reduce potential unwanted pregnancies. But this subject change is one that some social conservatives have been trying to push for awhile. It involves conflating teen pregnancy and adults choosing not to marry when they become parents, and low-income women's access to contraception with their "failure" to marry. (And drug use, why not?) But most crucially, it involves a nostalgia for the days when women neither had a choice over when they got pregnant nor had much of a choice but to try to marry the father.

Santorum even doubled down on the suggestion that more access to contraception leads to an increased "breakdown of the family," citing to Greta Van Susteren, again, the New York Times story about the high rate of children born outside of marriage. Then teen pregnancy got thrown in, with Van Susteren asking, "Are you saying that with contraception there's more sexual activity? That young people will be less sexually active without contraception?" Santorum replied, "That certainly was the case in the past."

Inconveniently, teen pregnancy is at a 40-year low, so you might wonder which past Santorum is longing for. It's true that between 1971 and 1988, more teenagers were having sex than before, but according to public health researchers, "At the beginning of the 1990s this trend reversed." The data also indicates that it's not an accident, so to speak, that the U.S. still has the highest teen pregnancy rate in the world: "A mid-1990s analysis of five developed countries showed that adolescents in the United States initiated sexual activity at an age similar to that of adolescents in Sweden, France, Canada and Great Britain but that they used contraceptives less frequently." A 2007 study in the American Journal of Public Health concluded that between 1995 and 2002, "the decline in pregnancy risk among 18- and 19-year-olds was entirely attributable to increased contraceptive use. Decreased sexual activity was responsible for about one quarter (23 percent) of the decline among 15- to 17-year-olds, and increased contraceptive use was responsible for the remainder (77 percent)."

As for the number of adults engaging in sexual activity outside marriage, it's also been pointed out that the trend of later marriage -- which also happens to correlate to a more lasting one -- is on a "collision course" with abstinence-until-marriage doctrine. (Rick Santorum may have eight children, but he married at 32, for what that data point is worth.) That Times piece about how more than half of births to women under 30 are outside of marriage (though a majority of women across the age spectrum are married when they have children) summed up the debate as follows:

"The forces rearranging the family are as diverse as globalization and the pill. Liberal analysts argue that shrinking paychecks have thinned the ranks of marriageable men, while conservatives often say that the sexual revolution reduced the incentive to wed and that safety net programs discourage marriage."

Birth control, of course, is used as a stand-in for the sexual revolution, but the suggestion is that without the pill, women might have been better able to coerce men into marriage in exchange for sex, whether those men are equipped to be partners and parents or not. Now, of course, they no longer need to solely rely on a man to support themselves (although two-partner households can certainly enjoy major economic advantages). How many women who lived through that earlier, more limited set of options would wish it on their daughters and granddaughters, as Santorum and apparently Romney do?

Conservatives also have suggested that the lure of no-strings-attached sex may have tricked women, too, into giving the milk away for free and saddled them with a baby or an abortion instead. "It is possible that women who are more confident in the reliability of their contraceptives may engage in sexual activity more often," speculated National Review contributor Michael J. New last year in seeking to explain why the abortion rate had risen for low-income women while it had dramatically dropped among more affluent women. The implication was that Planned Parenthood handing out pills to sluts had encouraged them to wildly have sex, get pregnant and hightail it to an abortion clinic. Wealthier women, who are more likely to be married, did ... what, exactly? Abstained? In fact, married couples report having sex more often than either single or partnered people, and according to census data, 78 percent of them use contraception. (There are still a million unplanned pregnancies that occur within marriage, and almost four in 10 of them end in abortion.) Meanwhile, contraceptive use among unmarried women overall is up, from 80 percent in 1982 to 86 percent in 2002.

As I wrote earlier this week, the evidence suggests that the key to reducing unplanned pregnancies, within and outside of marriage, is not less contraception -- it's more and better contraception, made more accessible alongside better information, all of which happens to correlate to your class situation. The substantive part of this "do you believe in birth control" nonsense is that the Obama administration has taken solid steps to correct the financial disparities in birth control access, by mandating that insurers fully cover it. And the fact that reproductive rights, when fully exercised, ultimately help women make choices for their own lives -- whether to have children, whom to have them with and when -- rather than making biology their inexorable destiny is what really rankles these Republican men.