Those weak losers who care about "law" 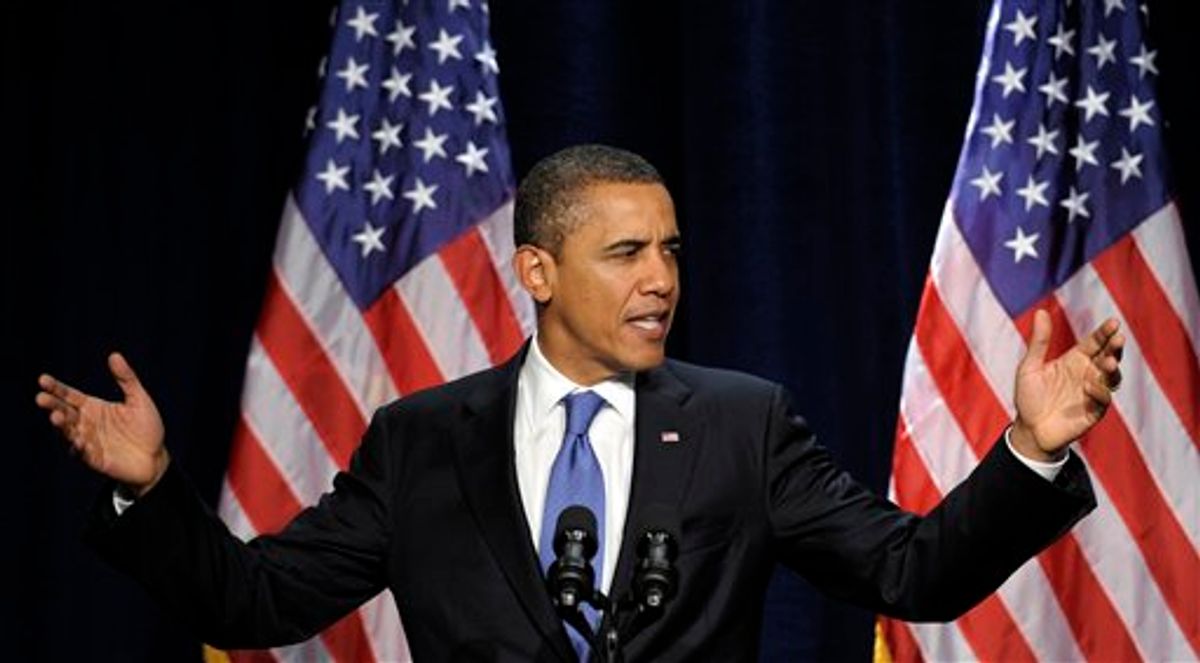 Everyone Strong and Serious knows that only weak losers who are unqualified to be Commander-in-Chief would care about whether they are allowed under the obsolete, leftist doctrine known as "law" to attack another country or crush the Terrorists. We first learned this from George Bush, who, in a 2004 campaign speech, mocked John Kerry as a law-obsessed weakling this way:

Some are skeptical that the war on terror is really a war at all. My opponent said, and I quote, "The war on terror is less of a military operation, and far more of an intelligence-gathering law enforcement operation." I disagree—strongly disagree . . . After the chaos and carnage of September the 11th, it is not enough to serve our enemies with legal papers. With those attacks, the terrorists and their supporters declared war on the United States of America, and war is what they got.

This same lesson was then taught to us by Sarah Palin, who derided Barack Obama in her 2008 RNC acceptance speech as a law-obsessed Terrorist-coddler: "Al Qaida terrorists still plot to inflict catastrophic harm on America, and he's worried that someone won't read them their rights."

And then we heard the same thing on Wednesday night from Stephanie Cutter, President Obama's Deputy Campaign Manager. She appeared on MSNBC to discuss that night's GOP debate with Lawrence O'Donnell, who subjected her to the very hard-hitting adversarial journalism for which that cable channel has become so justifiably admired when it comes to reporting on the Obama administration. After boldly challenging Cutter to explain what President Obama's large polling lead tells us about the GOP challengers (it shows the Nation adores the leader and hates the GOP), he then invited her to act as "truth squad" and identify the biggest lie told about the President during the GOP debate. This is how she responded:

The most egregious falsehood would be the President's position on Iran, whether it's Mitt Romney or Rick Santorum, attacking the President for not being tough enough on Iran. Ask any foreign policy expert out there, we have the toughest sanctions in place today than we've had in decades thanks to this President.  . . . Now look at Mitt Romney. What he didn't say on the stage tonight is that just four years ago, when asked the same question on Iran, he said he'd have to check with his lawyers. That does not make a Commander-in-Chief, somebody who has to check with his lawyers.

She went on to mock him for saying he would not invade Pakistan without its consent to get bin Laden. On "checking with his lawyers," what Romney actually said was this, when asked whether he would attack Iran without first getting Congressional approval:

The other topic that sparked fireworks was a provocative, albeit hypothetical, point of constitutional interpretation -- would the U.S. president need Congress' permission before launching an attack on Iran's nuclear facilities?

So Romney said that before attacking Iran, he'd want to know if he had the legal authority to do so without Congress, but then strongly suggested that he'd probably do it anyway. As Stephanie Cutter explained, only a weak loser would care whether he actually has the legal authority under the Constitution to start a war without Congressional approval (President Obama showed the Tough Commander-in-Chief Stuff of which he's made when he prosecuted a war even once Congress affirmatively refused to authorize it).

Of course, Candidate Obama, in 2007, when asked as part of an executive power questionnaire if a President could attack Iran without Congress, consulted with a long list of lawyers to prepare his response and, concerning that specific issue, said: "the President does not have power under the Constitution to unilaterally authorize a military attack in a situation that does not involve stopping an actual or imminent threat to the nation." During the campaign, candidate Obama vowed: "No more ignoring the law when it's inconvenient. That is not who we are. . . . We will again set an example for the world that the law is not subject to the whims of stubborn rulers." Hillary Clinton co-sponsored legislation to ban President Bush from attacking Iran without the approval of Congress. Joe Biden actually threatened to impeach Bush if he attacked Iran without Congressional approval.

But that was then, before they were in charge of the war-making machine. Now, Mitt Romney's tepid suggestion that a President should probably first ascertain his Constitutional powers before attacking another country is, according to the Obama campaign, proof of his losers-ish weakness: "That does not make a Commander-in-Chief, somebody who has to check with his lawyers," decreed Cutter, following in the illustrious footsteps of George W. Bush, Karl Rove and Sarah Palin (it's amazingly common how Democrats defend Obama's foreign policy record by tauntingly pointing to the pile of corpses he's produced and the punishing sanctions he's imposed, and by fully embracing the long-standing GOP metrics of "toughness" and arguing that Obama exudes them even more than the GOP itself). Thus: maybe a President has to take that old, antiquated, pre-9/11 oath to "preserve, protect, and defend the Constitution of the United States," but that doesn't mean you actually have to believe it. What kind of loser checks with his lawyers and cares about "law"?

UPDATE: Many active-duty service members apparently have a much different understanding of "strength" than Rove, Bush, Palin, Cutter and friends, given that the most anti-war presidential candidate is the one who has raised, by far, the most money from those members of the armed forces.

UPDATE II: David Rohde, the Pulitzer-Prize-winning former New York Times reporter and current Reuters columnist, explains how President Obama has significantly expanded executive power and triggered massive anti-American rage in the world through the use of drones and assassinations -- or, as Stephanie Cutter and modern-day Democrats would say, he's showing how Tough And Strong he is (it should be noted that Rohde, who spent months as a hostage of the Taliban, knows much about what motivates anti-American hatred and Terrorism):