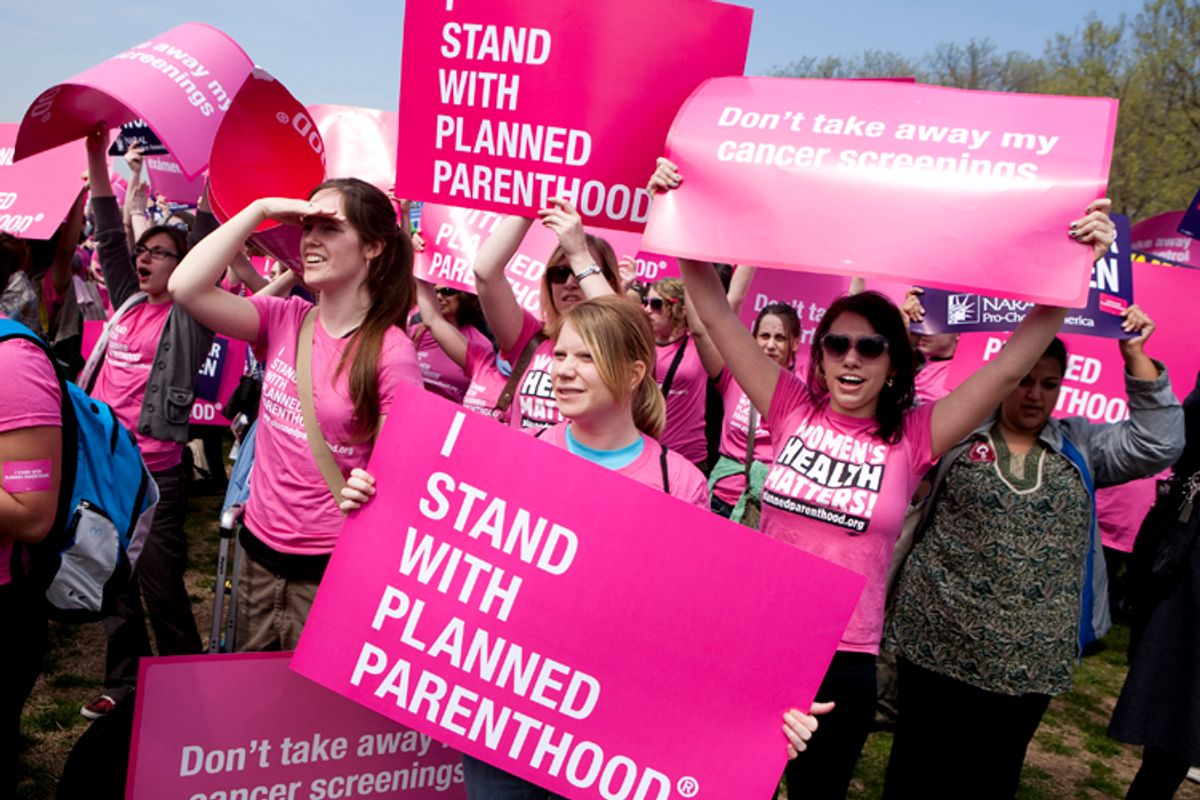 Members of Planned Parenthood, NARAL Pro-Choice America and more than 20 other organizations hold a "Stand Up for Women's Health" rally in supporting preventive health care and family planning services, including abortion in Washington April 7, 2011. (Reuters/Joshua Roberts)
--

Republican Virginia Gov. Bob McDonnell agrees that the state should not compel a woman seeking abortion to take a probe up her vagina. Polls show that even Republican women flee the specter of Rick (no amnio) Santorum, opening a gap in his improbable march to the nomination. And these are considered feminist victories?

Where once angry feminists flooded the streets of New York with photogenic protest marches and vowed to “take back the night” on campuses across the nation, now they’re grateful that their penetrator is not the government they elected. Where abortion was legalized and protected in every state in the nation, now they fight the government they elected not to empower their employers to deny them birth control insurance. Where once feminists combined support for the Equal Rights Amendment with campaigns to address the scourge of breast cancer, now they fight their own cancer charity, the Komen Foundation, not to victimize Planned Parenthood.

Amid all the celebration of the reversal in Virginia and in the Komen Foundation and the insurance of birth control in the Affordable Care Act, one thing remains true: If that’s where the battle over women’s lives is taking place, you’ve come a long way, baby. A long way down, that is.

For 40 years, women, the majority of the population and the majority of the electorate, have been the Sleeping Beauties of American politics, slumbering obliviously while vigilant and relentless adversaries surround their rights with a thicket of thorn trees.

Maybe it’s the fault of the '60s feminists. The Princess Sleeping Beauty’s royal parents tried to protect her from the fairy’s curse – that she would be pricked by the spindle of a spinning wheel -- by banning all spinning wheels from the palace. Using the modern equivalent of royal edict –a constitutional ruling from the U.S. Supreme Court -- feminists tried to protect reproductive rights by banning all anti-choice politics from the nation. The poisoned needle arrived anyway in the form of a law forbidding the government to use funds, mostly Medicaid, for abortions (the “Hyde Amendment”). Women, ignorant of the danger, failed to stop it. Oh well, the rich Princesses said, it’s only money. We don’t need Medicaid for our abortions, as long as they’re not criminal.

They missed entirely the Hyde Amendment’s toxic message that abortions are not the tool of women’s liberation, but a shameful private act that no populace should be expected to pay for. Women should be grateful if the country turned its face away as they sneaked off to unmarked abortion “clinics” and did the dirty deed. And so the downward spiral began. Having uncoupled abortion from the goal of women’s flourishing lives, women’s opponents attacked the value of women having such lives at all, positing a series of counterweights: children’s flourishing lives (home schooling), God’s will (abstinence, rhythm method, quiverfull movement).

And still the women snoozed. Reproductive rights became “reproductive health,” as if preventing a life-altering pregnancy was not a worthy enough goal. Keeping women healthy, for their male sexual partners, now that was a goal.  Rep. Hyde’s Republican Party paid no price in the voting booth, a majority of women voting Republican when men did and Democratic when men did too. Not until 1996 did women’s disaffection from the Republican Party even arguably change the outcome of a presidential election and even then it was one point, well within the margin for error.

Ambitious female New York writers made contrarian reputations denying the existence of date rape and falling in love with their babies. In 2008, a critical percentage of female Democratic primary voters declined to support the first viable woman candidate in the history of the Republic.

In the fairy tale a prince does the waking. In social movements, it’s usually the bad supervisor, as the saying goes, who “is the best union organizer.” Maybe insult from the Komen Foundation – women’s own pretty ribbon – will turn out to be the thing to sound the reveille. The pieces are in place for a reawakening. Social media makes it possible, as the Komen flap showed, and there are women in high cultural places like "Saturday Night Live" ("SNL" almost revived Hillary’s candidacy), which unexpectedly took on the Virginia law.

For some years, women with open feminist values have been emerging in the interface of mixed mainstream, online and social media, blogging at first, or writing for aggregators like the Huffington Post, and slowly moving into mainstream outlets as those outlets moved into the online world. Amanda Marcotte from Pandagon.com, who now often appears in the Guardian, and Jessica Valenti, who started Feministing.com and often appears in the Washington Post, are perfect examples of how the changing environment makes it possible for former social rebels to find outlets.

More important, the old online/mainstream divide is, well, old, with mainstream media increasingly emphasizing their informal, time-sensitive online outlets and online magazines flooding the zone in a very traditional way when stories like Komen appear. Slate, Newsweek/The Daily Beast and, of course, Salon, have fielded a range of feminist-oriented writers, so, when Komen erupted, women and sympathetic men covered the story everywhere from the Young Turks radio show to Politico. A combination of social media, highly placed opinion makers and self-conscious activists with access to liminal media has done wonders for the gay revolution in the last 10 years. Similarly positioned, women stir.

None of this will work unless women emerge from the dozy mind-set that made them vulnerable to the pushback. Valorizing Planned Parenthood for its cancer tests and defending amniocentesis because some women have it and don’t abort, won’t change a thing. As Planned Parenthood’s Gloria Feldt put it in her brilliant afterword to “Abortion Under Attack,” “where you start determines where you will end up in any conversation that has social and political ramifications.” Only claiming women’s right to a flourishing life and to any social technology, including, openly, abortions, which enables it, will stop the long downward spiral of the women’s movement.  Are women ready? It’s been 40 years since the Hyde Amendment. Maybe American women have been sleepwalking in the wilderness long enough.