How Occupy helped labor win on the West Coast 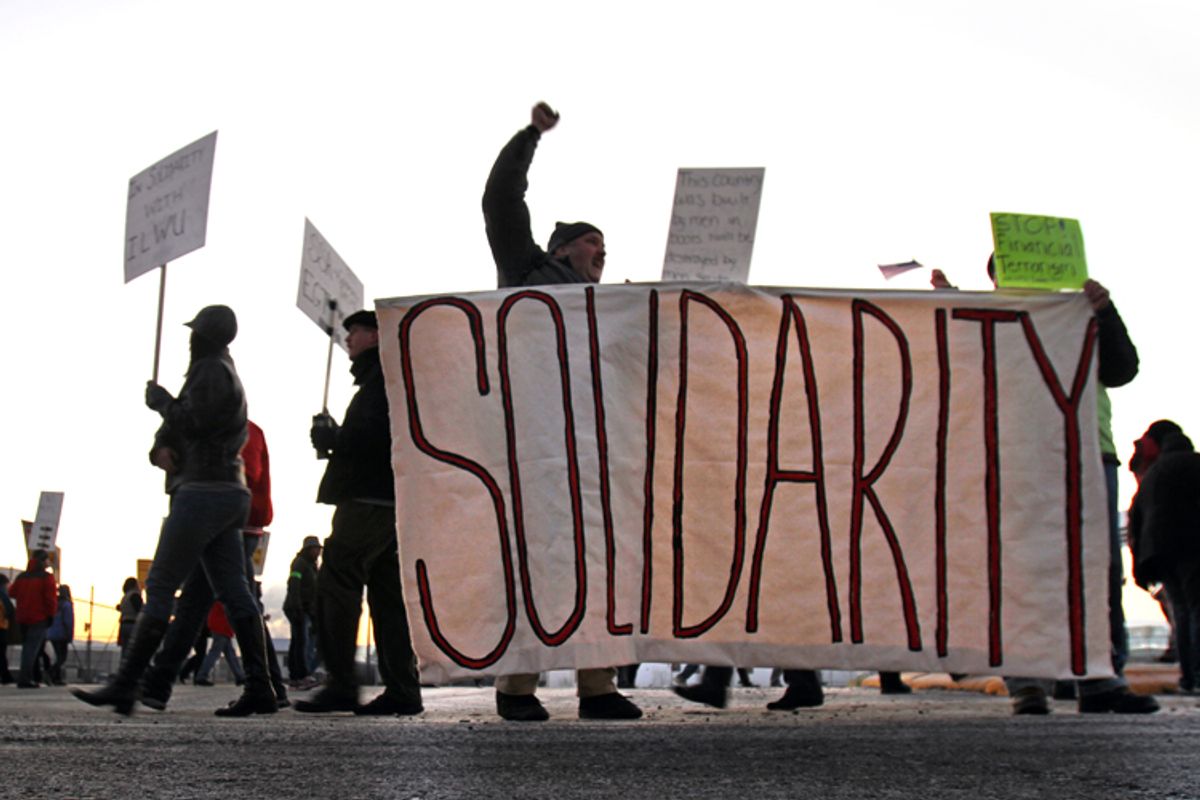 Earlier this month longshore workers in Washington state reached a contract with a boss that has spent the past year fighting to keep their union out.  That company, the multinational EGT, sought to run its new grain terminal in the town of Longview, as the only facility on the West Coast without the famously militant International Longshore and Warehouse Union (ILWU).  A victory by EGT would have emboldened employers up and down the coast to seek to free themselves of ILWU influence.  And if the union -- with the help of the Occupy movement -- had not defied the law, EGT would have succeeded.

The Longview struggle began last March when, after initial discussions with ILWU Local 21, EGT announced its intention to run its new grain terminal without them.  The ILWU held protest rallies, and joined the Port of Longview’s lawsuit charging that EGT was bound by the union’s contract with the publicly owned port.  The union may have had a good legal case.  But so did Washington’s Boeing workers when their boss blamed their strikes for its decision to take new work to South Carolina. Boeing mostly got away with it anyway.

Rather than putting all their faith in the law while EGT did its work without them, ILWU members chose to get in the company’s way.  Literally.  Beginning in July, union members blocked railroad tracks to prevent grain shipments from passing.  According to media reports, workers also tore down fencing and dumped grain.  Police charged that workers threw rocks at them; labor denied members were violent, and charged that police beat and pepper-sprayed workers without justification.  The ILWU did not formally endorse its members’ actions, but its international president was among the dozens arrested.  In September, 200 union members and supporters lined up outside the building housing the sheriff’s office and announced they had arrived to turn themselves in for nonviolently defending their jobs.

Pre-planned arrests for blocking traffic have become a common, and sometimes effective, tactic for unions seeking to embarrass employers or draw attention to their struggles.  But what took place in Longview was something very different: willful, repeated refusal to obey laws restricting union power.

As union negotiator Joe Burns documents in his recent book "Reviving the Strike," it was once commonly assumed – and even taught in economics textbooks -- that labor’s leverage came from the power not just to refuse to work at a company, but to prevent any work from taking place.  Today, following decades of laws and court rulings, the production-halting strike is nearly extinct.

Indeed, when ILWU members moved from protesting EGT to blocking the tracks, a judge slapped the union with fines and injunctions.  The National Labor Relations Board -- the same agency Republicans love to hate for enforcing labor law against companies – had asked the judge to act.  Workers’ production-halting actions continued despite an early September restraining order.  Whereas the town’s political establishment would otherwise have been content to wait for a judge to sort out both sides’ claims, the unions’ escalation sparked the town sheriff and county commissioners to publicly request a judge to expedite the case.  But after a judge issued a $250,000 fine and the threat of increasing punishment, the ILWU trimmed its sails, returning to more traditional protests and an unsuccessful attempt to recall the sheriff.

ILWU’s and Occupy’s different decision-making processes sparked some tension, and a few on each side conformed to stereotype: the hippie-bashing union staffer versus the contemptuously condescending activist. But Occupy, not being a labor union, could keep the threat of industrial action alive after the prospect of massive fines curtailed ILWU militancy.  And occupiers were steadfast in declaring its solidarity against EGT. The involvement of another union, an Oregon Operating Engineers local brought in by EGT to soften the appearance of union-busting, would have been excuse enough for some progressives to stay out of the dispute.  Occupy didn’t.

The situation escalated last month, as the (then undisclosed) date approached for the first grain ship to enter the Port of Longview.  Both occupiers and labor activists throughout the West Coast planned to come to Longview to meet it.  In a letter to members, ILWU International president Bob McEllrath expressed sympathy with Occupy, disclaimed any ILWU involvement in disruptive action, urged members to participate in legal protests, and decried “a federal labor law [the Taft-Hartley Act] that criminalizes worker solidarity, outlaws labor’s most effective tools, and protects commerce while severely restricting unions.”  Occupiers pledged to stop the grain shipment from taking place.  News broke that the ship would be escorted by the National Guard.

Before that showdown could occur, ILWU and EGT announced a deal that paved the way for ILWU labor to staff the Longview terminal.  Among its provisions, the agreement required ILWU to explicitly discourage further demonstrations against EGT by Occupy (it also reportedly included a few other concessions to management).

While the ILWU leadership has avoided gloating, occupiers and some ILWU members have been quick to claim victory.  In an emailed statement from an Occupy group, Bay Area longshore worker and ILWU Coastwide Caucus delegate Clarence Thomas said, “It wasn’t until rank and file and Occupy planned a mass convergence to blockade the ship that EGT suddenly had the impetus to negotiate.”

It’s not by accident that the tactics that allowed the ILWU to defend itself from EGT are the same ones that earned it fines and injunctions.  As AFL-CIO organizing director Elizabeth Bunn observes, there’s “a very close correlation between changes that employers insist on” in the law, “and the effectiveness of the tactic” that gets banned.  In other words, the more effective a union tactic at leveling the playing field against the 1 percent, the more likely courts or Congress have been to make it illegal.

The challenge of defending – let alone improving – workers’ standards within the confines of restrictive labor law is felt throughout the movement.  The Teamsters’ inability to shut down art shows helps explain how Sotheby’s auction house has gotten away with locking out unionized art handlers for months.

This summer’s strike by Communications Workers of America members at Verizon had barely begun before management was in court getting injunctions to limit the size of pickets.  In both of these struggles, labor is on defense.  Both have drawn the support Occupy Wall Street.  Neither has yet succeeded.

These restrictions help explain why unions increasingly rely on political, media, community and consumer pressure campaigns for leverage over employers – though, in a predictable perversion of anti-racketeering law, these campaigns have also come under legal assault from big business.

Joe Burns’ book suggests that unions spin off legally separate activist organizations, which could engage in more militant tactics without the restraints of labor law and without potentially devastating financial and legal liability for unions.  Occupy, though neither a formal organization nor a union front group, has illustrated the promise of such an approach.  But Burns also argues that unions may need to act, as ILWU members did, to “repeal” labor law “through non-compliance.”

The most famous example of such a strategy was executed by the United Mine Workers’ 1989 Pittston Coal strike, under its then-president Richard Trumka, who is now the president of the AFL-CIO.  Faced with a intransigent employer and an impossible legal regime, Trumka chose a strategy of non-violent militancy that racked up tens of millions in fines.  Trumka predicted correctly that if the UMW could get management to cave, it could get the fines dropped.  If the UMW had lost the strike, it would have been bankrupt. Trumka later said that labor would be better off if the National Labor Relations Act – including both “the affirmative protections of labor that it promises but does not deliver” and the “provisions that hamstring labor” - was abolished.

Interviewed in September, Burns predicted the Longview example could spread, as other workers watch ILWU members “understanding that the rules of the game are fixed,” and “going out into the streets trying to defend traditional unionism, and traditional union standards.”  Now that longshore workers have beat back EGT, more workers may conclude that the only thing riskier than defying labor law is continuing to comply.