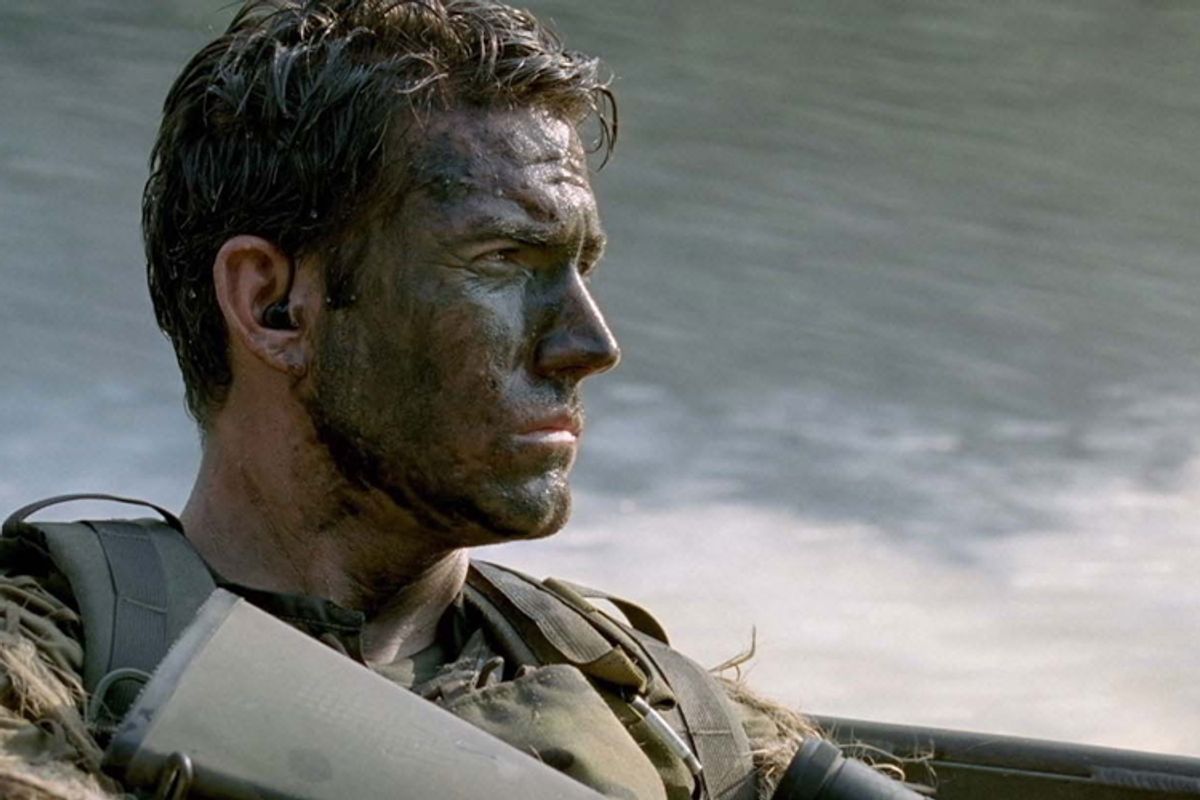 When philosopher George Santayana said "those who cannot remember the past are condemned to repeat it," he meant it as an admonition -- not as an endorsement of mass amnesia or historical revision. This should be obvious. Yet those operating at the shadowy intersection of the Pentagon and Hollywood either don't understand - or more likely, refuse to understand -- the thrust of the aphorism. Instead, with this week's release of a much-awaited film, Santayana's omen has been transformed into a public mission statement for a burgeoning Military-Entertainment Complex.

Since 1986's "Top Gun" rekindled the Pentagon-Hollywood relationship from its post-Vietnam doldrums, the collusion between the military and the entertainment industry has become a blockbuster con, generating huge benefits for both participants -- and swindling the American public in the process.

The scheme is simple: The Pentagon allows studios to use military hardware and bases at a discounted, taxpayer-subsidized rate. In exchange, filmmakers must submit their scripts to the Pentagon for line edits. Not surprisingly, those edits often redact criticism of military policy, revise depictions of historical failures, and generally omit anything else that might make audiences wonder if our current defense policy is repeating past mistakes.

If a studio doesn't agree to the edits, then it loses access to the martial equipment, and typically, the film is terminated. If, by contrast, filmmakers agree to the edits, access is granted, and the film gets made at a cut-rate price to the studio. Except in the credits' fine print, the audience is never told about the censorship.

The predictable result is a glut of movies that both celebrate U.S. military policy and whitewash the checkered history of military adventurism -- and relatively few major movies questioning that policy and that adventurism.

No doubt, as a system of stealth coercion, the arrangement has been wildly effective. But with America now questioning the efficacy of constant invasions and the morality of never-ending occupations, the Pentagon is getting worried and thus intensifying its agitprop to ever more manipulative extremes. Last year, for example, it cemented its first full sponsorship of a major film, "X-Men: First Class," integrating the movie into recruitment ads. It's now going even further, fully financing its own feature-length film, "Act of Valor," appearing in theaters nationwide starting Feb. 24.

Casting active-duty SEALs, the film is ostensibly about a mission to neutralize terrorists. But as one of the filmmakers let slip this week, its heroic portrayals and triumphs are really designed to once again make us forget the past.

"I'd like to see the legacy of Vietnam put to bed," said "Act of Valor" filmmaker Mike "Mouse" McCoy in an interview with the Huffington Post. "It was a really bad time in American history, absolutely, but it's time to sort of forget that and forget those sensibilities and don't associate our troops and our men and women to that conflict anymore, and time to really open our eyes to say, 'What's going on in this world? What are our men and women in uniform really doing right now for us?'"

While it's true that America's recent wars are not exactly the same as the Vietnam War, a stunning new report in Armed Forces Journal proves there are troubling similarities we could learn from. With history's lessons in mind, we might learn to refrain from involving ourselves in foreign quagmires because the human costs are too high. We might also learn that some conflicts have no military solution at all.

But such lessons run counter to a Pentagon focused on perpetually repeating a military-centric past, so those lessons are being deliberately obscured. That's indeed a triumph of the Military-Entertainment Complex, but it's a Pyrrhic victory for America -- one that guarantees Santayana's warning goes unheeded.