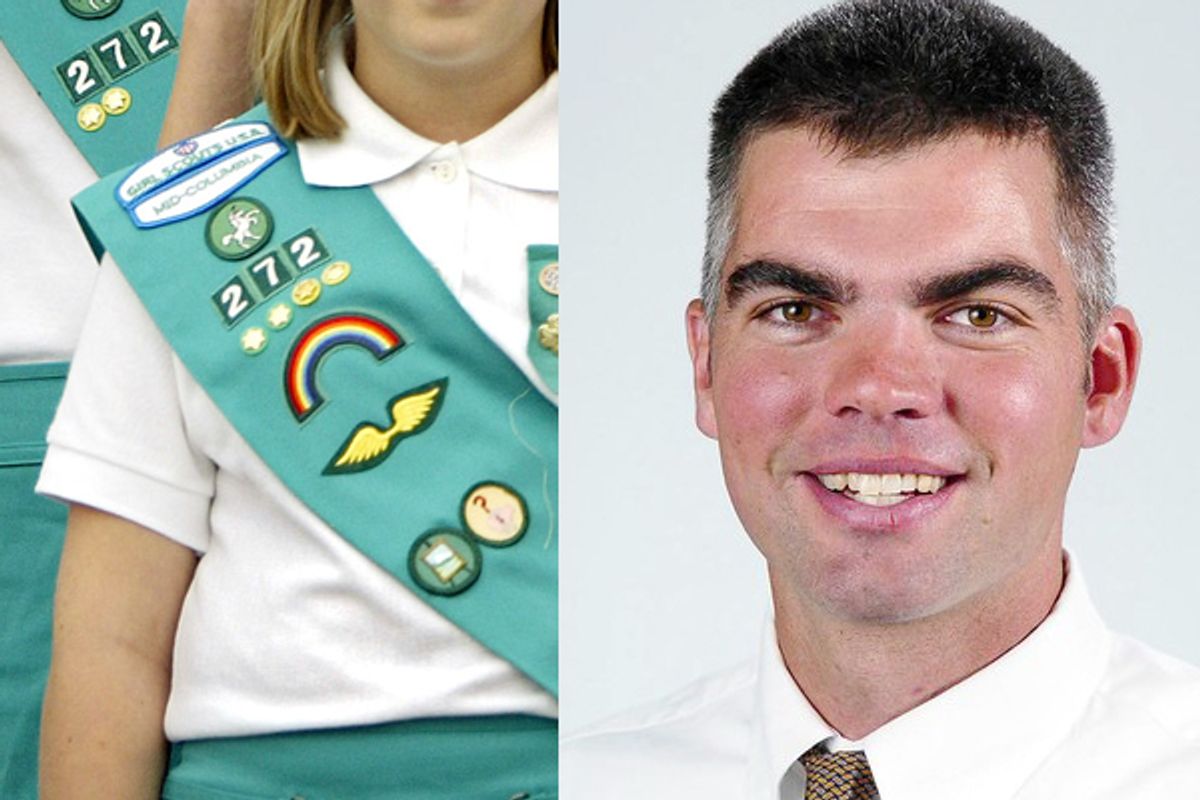 Like alligators in the sewers or aspirin between the knees, certain memes are too stupid to die. For example: the extreme right's continued depiction of green-clad girls as abortion-hungry, traditional values-subverting agents of Satan.

On Tuesday, Indiana State Rep. Bob Morris made headlines for pooh-poohing a resolution celebrating the organization Juliette Gordon Low founded 100 years ago, the one that teaches girls to "make the world a better place." Umbrage mightily taken, Morris declared the Girl Scouts were "quickly becoming a tactical arm of Planned Parenthood" and have been "subverted in the name of liberal progressive politics and the destruction of traditional American family values" by "liberal progressives" promoting "feminists, lesbians or Communists." He also, big surprise, worked in the words "indoctrinate" and "radically pro-abortion." Damn, when I was a Girl Scout, all  we ever did was make yarn dolls and sing folk songs.

For a while it looked like Morris, whose daughters have defected to the Christian-themed American Heritage Girls, was holding fast to his off-the-charts rhetoric. "My family and I took a view and we’re sticking by it," he told the Associated Press. But after a storm of negative press attention and some mocking distribution of Thin Mints by his fellow Republican, House Speaker Brian Bosma, Morris seemed to realize that being the laughingstock of Indiana isn't all it's cracked up to be. He has now backed down.

In a statement to the Journal Gazette, he called his words "emotional, reactionary, and inflammatory," and said, "for that I sincerely apologize." But while he acknowledged that "I never should have written the letter," Morris steadfastly maintains, "My conscience would not allow me to publicly endorse an organization that partners with Planned Parenthood – our State’s leading abortion provider."

Morris apparently has never heard of a little thing called Google. GUSA has no formal relationship with Planned Parenthood. True, eight years ago, Girl Scouts of the United States of America's CEO Kathy Cloninger contentiously mentioned on the "Today" show that GSUSA has "relationships…. with Planned Parenthood organizations across the country to bring information-based sex education to girls." She also, by the way, mentioned partnerships with church groups.

Despite its apparent lengthy history of forcing innocent little Brownies to swear their allegiance to baby killing, it's only lately that the Girl Scouts have really aroused ire. Last spring, conservatives were riled up after Texas siblings Sydney and Tess Volanski (and conveniently, their vocally anti-choice mother) launched the blog Speak Now to document the alleged transgressions of Girl Scouts USA -- based largely on the fact that the World Association of Girl Guides and Girl Scouts' occasional association with the International Planned Parenthood Foundation.

More recently, the organization scandalized conservatives when a Colorado troop accepted a transgender seven-year-old into its fold. So freaked was a Louisiana East troop at the purely hypothetical possibility of being asked to accept a trans child that it slapped together a hasty "for girls only" policy. Soon after, the troop fell apart entirely.

Boldly, and no doubt exasperatingly for its critics, the Girl Scouts takes a neutral stance on issues like birth control and abortion, declaring its role is "to help girls develop self-confidence and good decision-making skills that will help them make wise choices in all areas of their lives." And it likewise scandalously acknowledges the existence of transgender individuals and honors girls who are working to promote tolerance and diversity.

The scariest thing about GUSA isn't any agenda. It's the group's consistent philosophy that girls deserve to be educated and informed that so unnerves its critics. It's an encouragement of independent thought. And the outrage over that suggests a profound lack of trust in those "traditional" values and their persuasiveness. It sadly speaks to the ongoing reality that for many, the notion of letting girls figure things out for themselves is somehow radical. The Scouts don't tell anybody what to do. Instead, they encourage members to simply to "Try It." Try thinking. Try learning. Maybe that is a radical idea after all. Maybe Bob Morris should give it a shot.