The secret science of stardom

This weekend's ceremony isn't just about movies, it's about being photographed -- and there's a method to it all 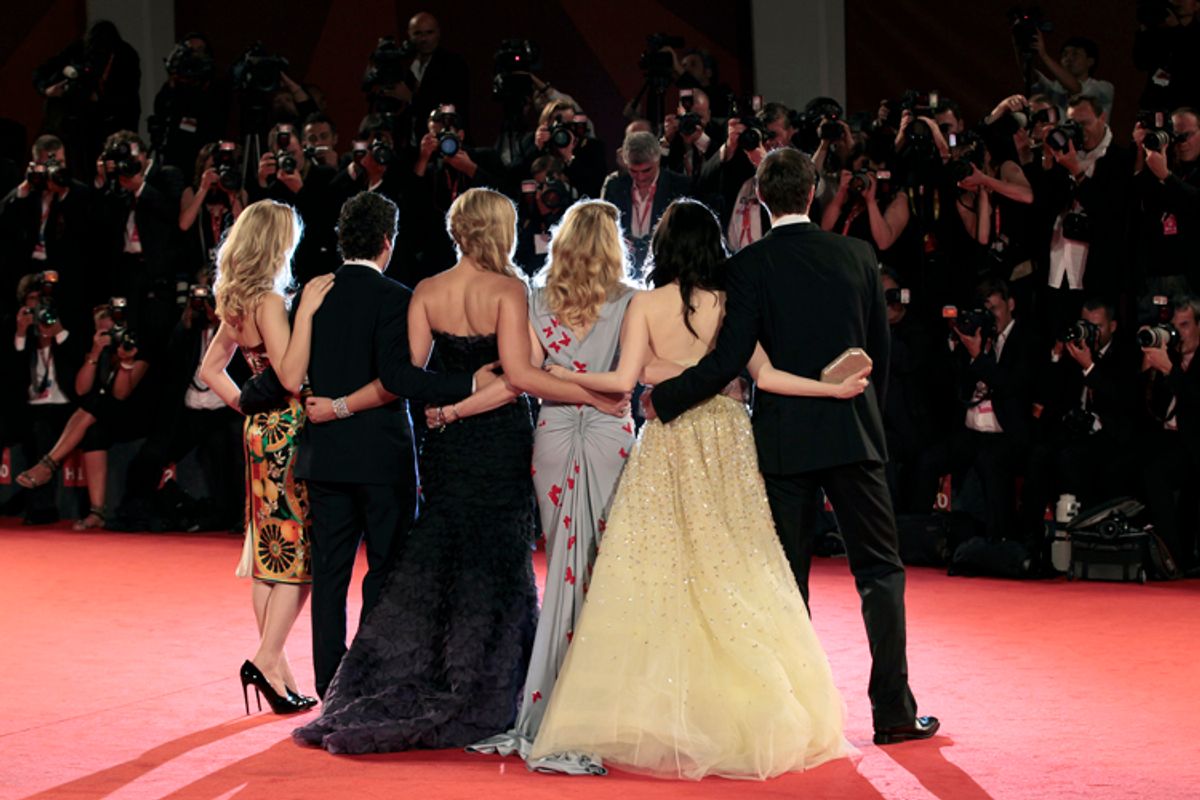 This Sunday, hundreds of Hollywood's brightest stars will cram into the Academy Awards. Among them will be George Clooney, Michelle Williams and many of the best-known names of the entertainment industry -- along with lots and lots of people you've barely heard of, forming an endless stream of anonymous penguins and haute couture gowns.

It’s not exactly headline news that being nominated for an Oscar can catapult the careers and celebrity status of newcomers like Jennifer Lawrence. What most people don’t know is that Oscar night is even more important to the invited non-nominees – those donning tuxes, shimmering sequined dresses and spray tans, but with little discernible talent: the Mandy Moores and Maria Menounos' of the world.

The Oscars are a key part of the secret economy of celebrity. A glance at the glossies at the grocery check-out aisle makes it clear that how and where a celebrity gets photographed can catapult -- or sink -- a career. But over the course of my research, I've discovered that the US Weekly factor has a much larger impact than most people imagine. In fact, it’s not just getting photographed but exactly where one gets photographed -- including the Oscars -- that may explain a star’s fortunes in Hollywood.

Let’s start with a definition of a star or a celebrity. Fundamentally, celebrities are special not because they work in Hollywood or play for the New York Yankees. There are plenty of actors and ball players who are good at their day job but never grace the cover of People. The basic criterion for being a star is that society is collectively interested in someone for things that transcend their talent. We care about Derek Jeter’s love life as much as his performance at last night’s game. We are more interested in Kim Kardashian’s divorce than her next career move (bear with me here, I realize that “career” is a stretch). Stars become stars – those people we idolize, loathe, admire and obsess over – because they are either extremely talented (A-Rod, George Clooney, Angelina Jolie) or simply media fodder, otherwise deemed “famous for being famous.”

Over the course of several years of research, my colleague Gilad Ravid of Ben Gurion University in Israel and I have charted 874 film actors – Matt Damon, Lindsay Lohan, Angelina Jolie, Neil Patrick Harris, among them – who have been photographed over and over again by Getty Images, the world’s premier photographic agency. We studied whether where and how much they’ve been photographed correlates with their overall stardom.

Ravid and I wanted to get to the bottom of how one became a Jolie kind of star rather than a Kardashian. Google can tell us who’s getting the most media attention. Forbes’ Star Currency index ranks the stars most prized by the film industry – those talented actors who bring in box office receipts, financial backing and are revered by top Hollywood executives. Will Smith, Johnny Depp, Brad Pitt, Jolie and Clooney all rank in the top-10 most talented; Paris Hilton, Lohan, Jessica Simpson and Kim Kardashian are some of the most talked-about stars as measured by Google. (Unsurprisingly, Jolie makes the list in both media mentions and talent ranking.)  We then looked at those stars who appeared in our Google media list, on the Forbes talent score and in our Getty photographs of celebrity social events. We were interested in whether talented stars act differently than those driven primarily by media. In our analysis we find clearly different patterns of behavior for different types of stars.

Say you’re a film actor struggling to be taken seriously or trying to recreate your image. The tragic Lohan, the waning Hilton or the precipitously hanging on Kardashian come to mind. For celebrities who don't have a lot of talent, the key to stardom is getting your picture taken many times over. In our dataset of over 600,000 photos, Paris Hilton is the most photographed star of all. She attends more events than any other celebrity and makes socializing look like a genuinely arduous task. Hilton attended over three times as many events as Oscar nominee Brad Pitt. Stars like Pitt with industry gravitas show up to an average of 20 some events per year, and this year’s Oscar nominees are cases in point: Clooney was photographed by Getty at 29 events around the world, Michelle Williams attended 24 and Viola Davis a mere four events in the very same year that Hilton attended 95 events.

But frequency is only part of the story.  Where one gets photographed is also reflective of one’s stardom. We find that 80 percent of all photos are taken in just three cities that comprise the backbone of the celebrity circuit: Los Angeles, New York and London. Yet even though these cities may be where most of the photographers and star-driven events are located, the type of stardom one possesses hinges on a few other specific places.

Maybe you would think that all stardom rests on spending time in Los Angeles, but that’s only true for those mostly known for their faces rather than their riveting performances. Media-frenzied stars get a real bump in star power simply being written about and photographed in Los Angeles, while talent-heavy stars spend very little time in Hollywood and its environs. In one year, Hilton, Kardashian and Lohan were photographed at 44, 24 and 22 events in Los Angeles, respectively – that’s not including any quotidian stops at the Coffee Bean, various night clubs or Robertson Boulevard. Contrast these camera flashes to Hollywood A-listers: In the very same year, Jolie showed up at just five Getty-photographed events in Los Angeles and Jack Nicholson to just 11.

For those whose stardom relies on non-stop media attention, the most valuable places to be photographed are Los Angeles and Florida broadly drawn. Gold standard stars such as Oscar winners and nominees Jolie, Nicholson, George Clooney and Brad Pitt literally live in a different world.  The geography of stardom for talented stars extends to Tokyo, Paris, Cannes and Madrid, where they show up for movie premiers, film festivals and gala events. With very little effort and not too much travel, they are guaranteed to draw crowds of fans, which is why cities far from Hollywood bother to host major events around them.

So what does all this camera flashing tell us about the Oscars? Ironically, despite the fact that the Oscars are a celebration of the best and brightest in Hollywood, our research suggests that for talent-driven stars there is little career need to show up at all. Those A-listers not nominated won’t gain or lose anything from walking the red carpet, other than perhaps ending up on a best-dressed or worse-dressed list, while those in the running for an award might as well have it couriered and avoid the traffic on Sunset Boulevard. After all, once a star ends up being nominated or winning an Oscar, they are catapulted to the top echelons of Hollywood elite, which means they should be spending less time in Los Angeles and more time at events around the globe (or signing on to the next Harvey Weinstein production).

For media-driven stars, it’s another story all together. Statistically speaking, Los Angeles is the most valuable place in the world to uphold their celebrity status and the Oscars is the zenith of this ritual. In the days and weeks after the ceremony, pages and pages of glossy tabloids are devoted to an event that may ostensibly be about talent but is, for the rest of the world, primarily about celebrity.  The famous for being famous may not be acknowledged by the Academy but symbiotically their faces sell magazines and those magazines make these lesser-talented stars’ careers. And of course, if one falls into this latter category of star, best-dressed or worst-dressed, red carpet snap or audience pan photo – getting into the magazines is the essential career move.

To us folks eating pizza and watching on our flat screens, Oscar night seems like a grand, cohesive affair, with the industry’s most talented actors receiving praise from their peers for their work and contributions to film as art. But adulation is one thing, the business of celebrity is another. For the vast majority of those in attendance, showing up and being photographed is all that counts.

Elizabeth Currid is assistant professor at University of Southern California’s Price School of Public Policy and author of "Starstruck: The Business of Celebrity."