As I wrote about on Wednesday, Associated Press over the last year has been publishing an investigative series detailing how the NYPD, often in conjunction with the CIA, has been systematically spying on entire Muslim communities both in New York City and in surrounding areas. Virtually none of those spied upon are suspected of any wrongdoing; they are just innocent people who are targeted for surveillance solely because they are Muslim. That's why the program is so controversial. This is how this controversy was depicted yesterday by The New York Post, in a cartoon by Sean Delonas (click to enlarge; h/t sysprog): 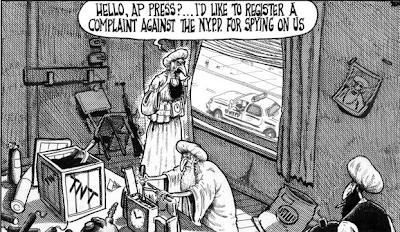 According to The New York Post, to be Muslim -- as between 5-7 million people in America are -- is to be a hook-nosed, Osama-worshipping, suicide-bomb-wearing Terrorist. There is no other interpretation for someone justifying a massive, indiscriminate spying program aimed at Muslims generally with this response. It goes without saying that there is not a single other group against whom bigotry this hateful and overt would be tolerated. And that explains a great deal about what has happened with U.S. policy -- both foreign and domestic -- over the last decade.