Despite Kathryn Bigelow and the "Bridesmaids'" breakthrough, the Oscars are still dominated by men. What gives? 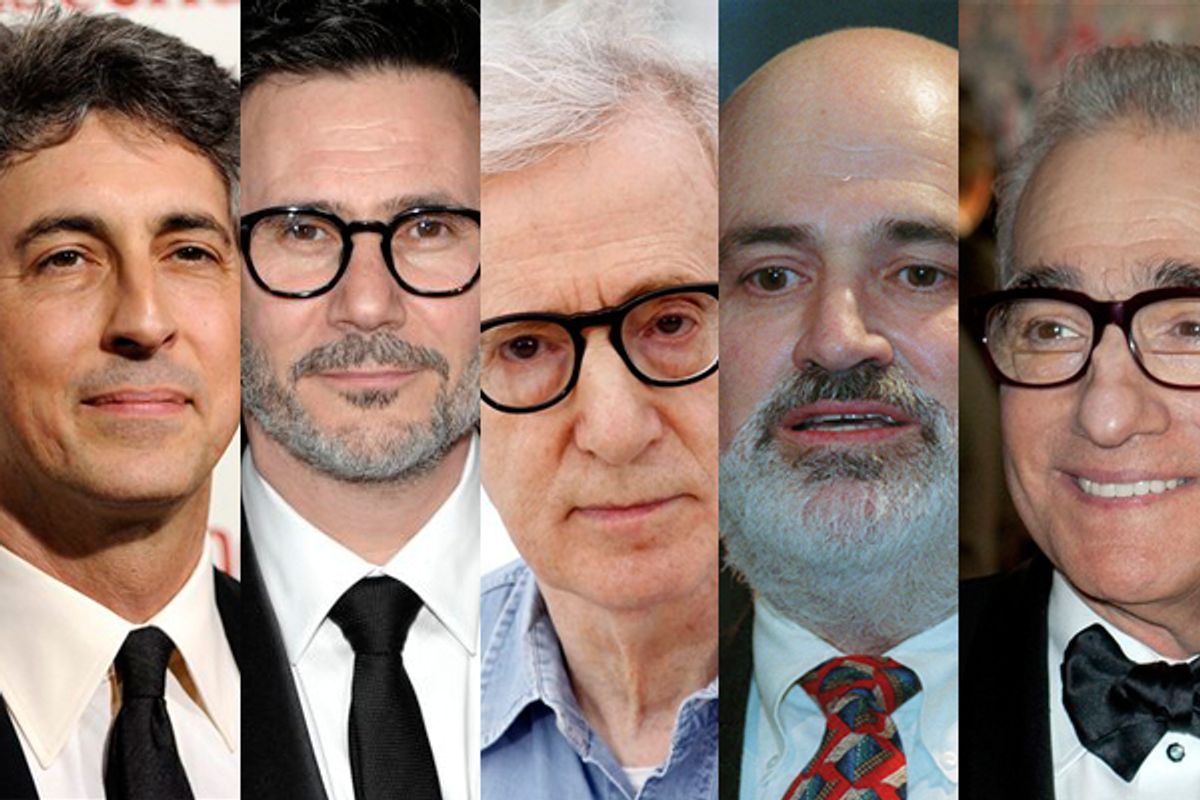 Hollywood has long had a problem with women, but with Kathryn Bigelow's historic best director Oscar in 2010 for "The Hurt Locker," it looked like things might be slowly changing. And in 2011, the box-office success of "Bridesmaids," a raunchy comedy written by and starring women, led to predictions that Hollywood was finally ready to recognize the reality that female-centric movies could be as profitable as man-centric movies. While no industry that employs Michael Bay can really be considered a safe space, more women in production positions might mean better depictions of women, more roles for older actresses, and more influence at the Academy of Motion Picture Arts and Sciences, the organization that awards the Oscars.

That may end up being the case years down the line. But judging from the available evidence, it's not going to happen any time soon. Bigelow's movie was released in 2009, but in 2011, only 5 percent of the top-grossing movies were directed by women. And, astoundingly, the Oscars are even worse. None -- zero -- of the films in the best picture, best director, best adapted or original screenplay, best lead or supporting actor, and best supporting actress categories were directed by women. In the major categories, 98 percent of nominations went to movies directed by men, 84 percent went to movies written by men, and 70 percent went to movies starring men. The only female-centered movies that appear outside the best actress categories are "The Help" and "Bridesmaids." In the best picture category, there are as many movies about women as there are movies about horses.

Getting beyond basic cast-and-crew details, Anita Sarkeesian, a feminist pop culture media critic and the editor of Feminist Frequency, has produced a video putting the 2012 best picture nominees to the so-called Bechdel test. This looks at whether a film has, at any point, female characters having an interaction with each other that's not about a male character. Only two of the 10 pass. While it's possible for male directors and writers to produce representative depictions of women (as Manohla Dargis said in a 2009 interview, "Flaubert wrote 'Madame Bovary.' That's all we need to say about that"), they mostly don't. Female characters aren't given anything to do besides pine about their (heterosexual) romantic interests.

Besides Bigelow, only three other women have been nominated for the best director Oscar: Sofia Coppola for "Lost in Translation" in 2003, Jane Campion for "The Piano" in 1993, and Lina Wertmüller for "Seven Beauties" in 1976. In the years since Bigelow's win, no women have been nominated. "Women in Hollywood are still largely excluded from prominent decision making and production roles," Sarkeesian wrote in an email. "Bigelow's win is definitely something to celebrate, but I don't think it reflects on any substantial shift within the film industry as a whole."

Nor were the 2010 Oscars an unalloyed triumph for feminism. As Rebecca Clark Mane, a feminist cultural critic from the University of Washington, pointed out, the dual wins for Sandra Bullock in "The Blind Side" and Mo'Nique in "Precious" sent a troubling message. "They managed to both celebrate regressive gender politics which locate women's primary role as mothers while at the same time setting the 'bad' black mother against the 'good' white mother," she wrote.

"Bridesmaids" has already had a positive effect on the fortunes of some women in the industry; "Who Invited Her?," a comedy by Sascha Rothschild about a woman invited along on a bachelor party weekend, was quickly picked up after "Bridesmaids'" big numbers came out. But it's troubling that the job prospects of an entire gender seem dependent on what's likely to be a comedy fad, and it's telling that every action movie of note released since "The Hurt Locker" has been directed by a man.

The source of women's underrepresentation at the Oscars is not exactly a mystery. A recent study by the L.A. Times confirmed what we all pretty much suspected: The Academy is overwhelmingly white and male. Seventy-seven percent of Oscar voters are male, a population that is very much at odds with America but fairly representative of the people who make the decisions in Hollywood.

Hollywood's sexism is so obvious that it's become almost hard to get worked up about. But these numbers should be incredibly troubling. Few industries that aren't explicitly men-only, like professional sports, are allowed to display such drastic gender bias. Hollywood movies are funded by men, made by men -- and, usually, made for men, especially young men.

Awareness of that audience makes the Academy's embrace of even the two female-centric movies problematic. While the commercial success of "Bridesmaids" is heartening, its Oscar nominations came only in the writing and supporting actress categories, not the prestige picture/director awards. And it's notable that only a female comedy that was repeatedly, and pointedly, presented as a male "raunch comedy" with female leads could receive recognition. It's like the supposedly anachronistic plot of another nominee, "Albert Nobbs": Women can only succeed by acting like men. It's not that "Bridesmaids" isn't a great film that deserves a billion awards. It's just that, standing up there by itself, you start to get suspicious why that film was singled out. It's like Carrie suddenly getting picked as homecoming queen. Reasonable observers begin to suspect there's an ulterior motive at work.

There's a similar problem with "The Help" being the only female-centric best picture nominee. Its problems with race have been widely discussed (and, indeed, Sarkeesian does in her video). But its representation of women in general is problematic, too. In the best picture category, male leads get to be actors, landowners, adventurers, inventors, writers, executives, soldiers and architects. Female leads get to be … housewives or domestic servants. (Even the supporting female characters are largely wives and mothers.) It's not that this doesn't represent an aspect of women's experiences. It's just that it doesn't represent anything close to the entirety of women's experiences, and the recognition of a film that emphasizes gender stereotypes and not a movie that gives another kind of portrait (like "Young Adult," say) is telling.

How to fix this? The industry isn't going to deal with the problem by itself, or it would've done so already. It's even in its self-interest to cater to female audiences (movies like "Twilight" show how much potential is there), but Hollywood still can't manage to get its act together. Nor is the nature of the entertainment business holding movie executives back from employing more women. Television, while far from parity, at least offers better opportunities for female creators, from Tina Fey's "30 Rock" and Jenji Kohan's "Weeds" to all the female showrunners now working and the older actresses that have found a home on the small screen when the movies turned their back.

Maybe we need some affirmative action for Hollywood. If the government thinks it's important to set standards for equality in workplace hiring, sports and college admissions, it might be time to recognize the importance of movies' cultural and economic power. Hollywood is, after all, a multibillion-dollar industry, and one of America's biggest exports. For women to have so few opportunities in the upper ranks of such an important industry is absurd, and exactly the kind of thing the government would want to get involved in -- theoretically, anyway. In reality, of course, Hollywood has ingratiated itself so thoroughly with elected officials that it's highly unlikely any such action will get taken soon.

Writing about these sorts of issues can sometimes be hard, especially when it comes to private organizations like movie studios. Unlike the government, Paramount Pictures never agreed to fairly represent their audience, and have the right to pursue profit however they please, even if it would be more profitable not to ignore half of your potential audience. And if Terrence Malick wants to make a movie so man-focused that it could fairly be retitled "Father Issues Across the Ages," he should go right ahead, especially if it's going to turn out as wonderfully as "Tree of Life" did. But award shows are dedicated to recognizing a large number of quality films regardless of commercial interest, and are decided by a small, defined elite. Though they are also, of course, four-hour smugfests of meaningless, self-congratulatory drivel, they offer an opportunity for a cultural industry to show what it values. And if the Oscars are anything to judge by, then Hollywood doesn't value women very highly at all.