A massive mall could overwhelm the artistic downtown of Athens, Ga. Is a town's cool culture worth protecting? 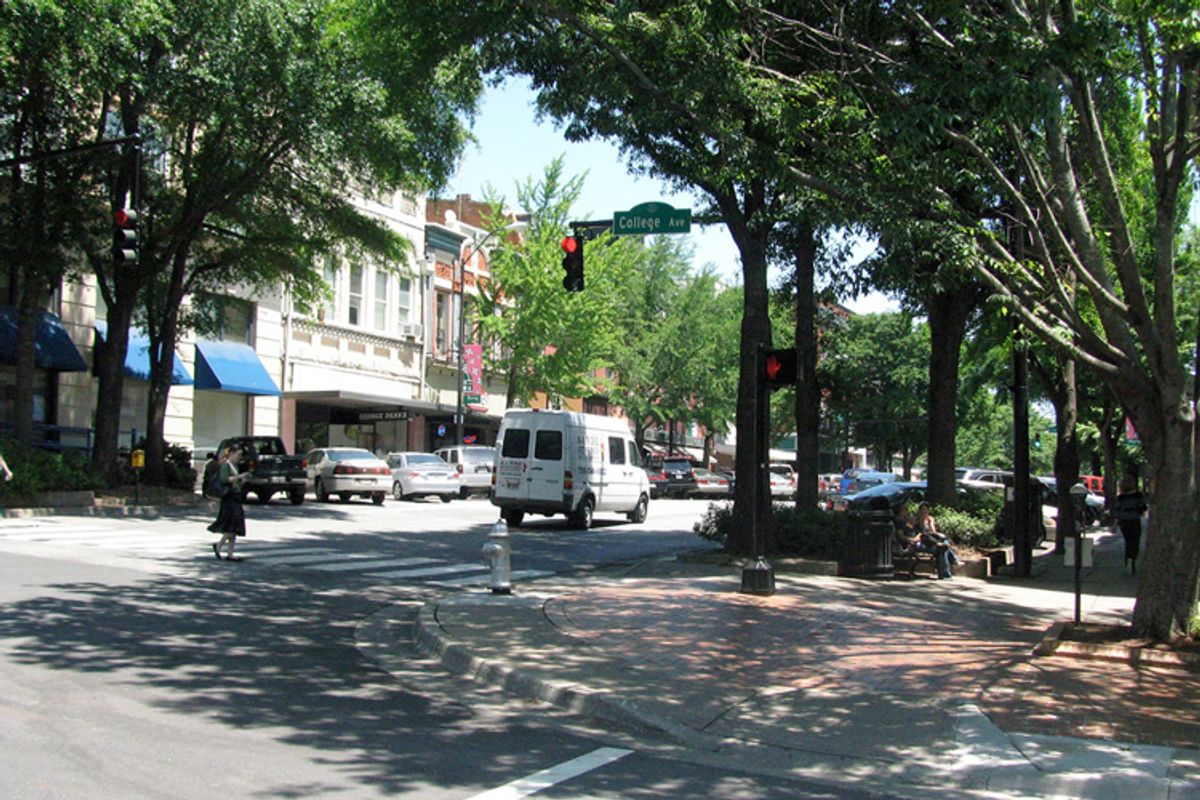 ATHENS, Ga. -- The Athens, Ga., soul-food joint Weaver D's has barely changed in the 20 years since its slogan, "Automatic for the People," supplied the name of a groundbreaking R.E.M. album.

You could say the same about Athens itself. After businesses fled in the '80s, downtown Athens rebounded as an alt-rock mecca that spawned the soundtrack of Generation X. R.E.M., the B-52s, Widespread Panic and thousands of other musicians and artists helped create what is, in many ways, today a dream city: a mixed-use, walkable urban core filled with small businesses, plenty of green space -- and a music scene that rivals that of cities 10 times its size.

Cue "The End of the World as We Know It." A multi-building mall-like shopping complex, likely to include the dreaded Walmart, has set its sights on downtown Athens. Renderings by the Atlanta-based developer Selig Enterprises show a bricked concourse surrounded by large-scale retail, including a 94,000-square-foot superstore, topped with apartments. It also includes three restaurants -- two of which are over 10,000 square feet -- and 1,150 parking spaces. This is new for downtown Athens, which unlike most college towns, has largely kept chains away.

"There's an Athens style," says Willow Meyer, a 37-year-old lawyer who moved here with her husband two years ago, "and if you just import this kind of 'Anywhere, USA' development, the city loses something."

What does it lose, exactly? That's the question at the heart of local opposition to the project. Residents here have spent years carefully crafting an indie-centric downtown. Small businesses dominate, and a DIY aesthetic permeates the streetscape. R.E.M.'s offices are downtown, not far from Wuxtry Records, the shop where a young clerk named Peter Buck met a regular customer named Michael Stipe. Indeed, after the University of Georgia campus, Athens' "style" might be its most important economic asset. The city is a music-industry leader in a state where music generates $3.7 billion a year. Last year's AthFest Music and Arts Festival drew 60,000 visitors. In a city with only 116,000 residents, tourism chugs $220 million into the economy annually -- over half a million dollars per day.

R.E.M. disbanded in September, but the city's appeal and romantic charm have remained in place, and helped set the stage for other industries to boom. One resident called Athens' burgeoning restaurant culture "the new music scene." Scruffy burrito and falafel joints have been joined by world-class cuisine, including two restaurants operated by "Top Chef Masters" contestant Hugh Acheson.

Without its unique identity, it's hard to imagine the city maintaining this kind of sustained desirability. Athens might have become just another college town down the road from Atlanta. "It seems this development was designed with very little thought to where it was going," says R.E.M.'s Mike Mills, who collaborated with other local musicians, led by Drive-By Truckers' Patterson Hood, on a song about the project, called "After It's Gone."

Though it's hard to quantify the economic value of "cool" in cities, people have tried. Richard Florida has written extensively on how cities with large "creative classes" thrive. The Brookings Institution found in October that young people are leaving bubble-economy hot spots like Atlanta and Phoenix and moving to cities considered hip like Austin, Texas, and Portland, Ore. And local data suggest that Athens might be benefiting from the same effect: The county grew by a healthy 15 percent between 2000 and 2010. (Athens and its surrounding county are consolidated, which makes comparing its growth with other Georgia cities difficult.)

How much of this growth is attributable to Athens' enticing style is impossible to know, partly because ephemeral lures like style and more concrete ones, like jobs, are symbiotic. And that's exactly the point opponents of the development are trying to make. "Athens is successful in large part because of its quality of life," says Mills. "Quality of life draws investment and new citizens." Even if the development does create jobs, its diminishing effect on the appeal of downtown might cancel out its economic benefit.

But it's important to note why some people want it. While Athens' unemployment rate is about a percentage point lower than the national average (and 2 points lower than Georgia's), the poverty rate is nearly 40 percent -- the eighth highest out of 159 counties in the state. It's an uncomfortable dichotomy that throws some cold water on the allure of the (largely white) downtown scene. At a commission meeting earlier this month, support for the project split largely along racial lines. "Small jobs are better than no jobs," was how one black supporter put it.

Mayor Nancy Denson and Chamber of Commerce president Doc Eldridge are both supporters of the development. (Eldridge and Selig Enterprises did not return calls for comment; Denson could not be reached before publication.) Perhaps surprisingly, so is Weaver D's owner Dexter Weaver, whose restaurant is right down the block. “I’m a property owner, and I’m for it," he told the Athens Banner-Herald. "The other people don’t live around here. They’re the party of no.”

It's Not About Walmart

Mills insists that's not true. "We're not anti-development," he says. "It's 10 acres of privately owned real estate right next to downtown. It should be developed. But it needs to be done in a way that suits Athens."

In a twist on the typical narrative, however, that doesn't necessarily mean no Walmart. When locals got wind of the project, the initial protests were virulently focused on keeping out the world's largest retailer. But the truth is, the downtown desperately needs more practical retail. Right now, there's not even a grocery store, and there are more places to buy vintage skirts than paper towels. So last month, a group working under the banner "Protect Downtown Athens" began trying to broker a compromise that reframed the debate as one over the project's design, rather than who might move into the space.

And that's where things got interesting. Suddenly, your average Athenian was talking less like an anti-corporate protester and more like an urban planner, using phrases like "site permeability" and "transportation mode share." "Here's a great example of adaptive re-use," Tony Eubanks tells me as we drive past a pizza place in a building that used to sell tires.

Eubanks is the 53-year-old former manager of the city's legendary rock venue, the 40 Watt Club, and one of the leaders of the Protect Downtown Athens movement. He and his collaborators are starting to make an argument that rarely gets enunciated in these sorts of fights: that in urban development, scale and design can matter more than the name of the store. The products being sold at the Selig shops might not compete with the area's current retail, but through sheer size, the gravity of the complex itself could suck foot traffic away from downtown. "There's 186,000 square feet of total retail space downtown," says Bob Sleppy. "This proposal is 167,000 square feet. You're setting up a scenario where you have a Downtown A and a Downtown B."

Sleppy runs a nonprofit called Nuçi's Space, named after a local guitarist who committed suicide, that offers musicians a unique combo of mental health services and practice space. His one-story building sits next to the ruins of the church on Oconee Street where R.E.M. played their first gig, and would face the back wall of the development, which, based on renderings, looks about 60 feet high.

"This is an inward-facing development," says Sleppy. "It literally turns its back on the community." The project would also face away from the city's greenway, a linear park running along the North Oconee River, and a proposed 1.2 mile rail-trail. The rest of its perimeter is more open to the city, but the feel -- and the intent -- is clearly to create a self-contained shopping district.

Praising this as "urban design" has become a talking point for supporters. Jo Ann Chitty, senior vice president of Selig, told the Athens Banner-Herald that they "talked to several grocery retailers, and Walmart was the only one that was willing to adapt to an urban design." In an editorial for the same paper, Doc Eldridge called it "progressive, modern, urban design."

But you don't need a degree in planning to see that this kind of urbanism is very different from what's grown organically in downtown Athens over the years. (Members of R.E.M. own several buildings and rent them out to local businesses, including the vegetarian hotspot the Grit.) Including all the obligatory elements -- green space, an "entertainment plaza," apartments to make it "mixed-use" -- only seems to highlight how out of place the Selig development would be. Eubanks compares it to Atlanta nightclubs that have tried unsuccessfully to open branches in Athens. "Transplanting that kind of thing just doesn't work."

Not that Athens endeavors to stay frozen in time. Plenty of new construction has benefited the city, including several national hotel chains and new off-campus suites for UGA students. But the city has updated slowly, and opponents of the proposed development want the Selig site to be developed the same way, starting, perhaps, with a smaller Walmart.

If Not This, What?

Right now, there's a Walmart Supercenter four miles down the road, where most of the national chains sit. "It's on a four-lane divided highway," says Sleppy. "That's an appropriate place for a store that size." Sleppy has written to Selig asking them to consider building a Walmart Market instead, which is a model the retailer has that's about half the size of what's currently planned. He's gotten no response.

Protect Downtown Athens insists that the development as currently planned is not a done deal. But with the city's leaders behind it and a diminishing number of regulatory hurdles to be cleared, the headwinds are formidable. "We're in the South, so everyone's real nice," says Eubanks in describing his meeting with the developers. "But they didn't even have a piece of paper to take notes on. It was kind of discouraging."

Last week, however, the city got some big news -- huge, in fact. Caterpillar announced it would move a major factory from Japan to the U.S. -- and that it would locate it on the Athens-Clarke county line. The plant, which could break ground in as little as two weeks, will create 1,400 manufacturing jobs, and as many as 2,800 additional jobs from Caterpillar's suppliers. Athens has been looking for a company to fill the site since the '70s, and beat out several other cities for the deal. The Banner-Herald has speculated that President Obama will come to Athens to preside over the groundbreaking.

Selig's opponents are hoping that the unexpected good fortune will help illustrate why a big-box development isn't best for downtown Athens. "People think we're just desperate for jobs, but this shows what we can get if we work for it," says Sleppy, before pointing out one of the chief reasons that Caterpillar gave for choosing Athens as their new home: quality of life.

As one county commissioner put it, "They wanted a nice place to live."