More voters are worried about governmental control than women's health, they say 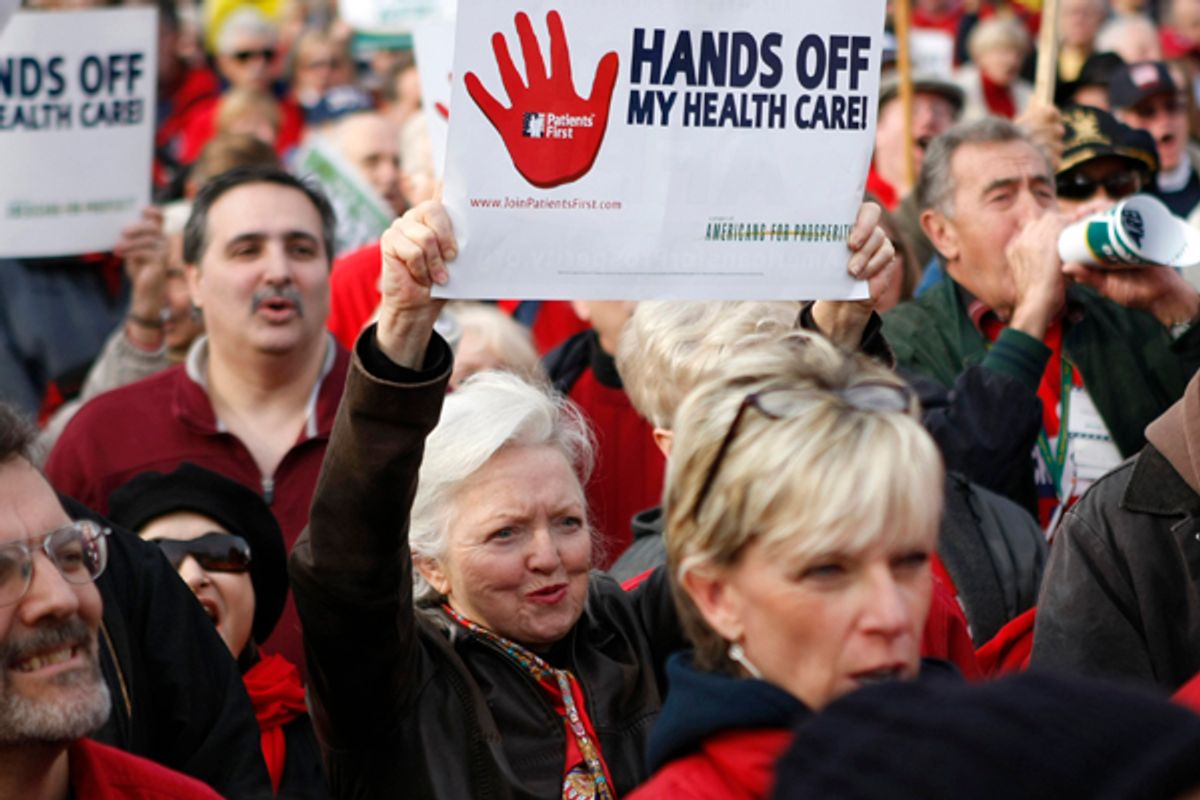 Demonstrators protest against the healthcare bill outside the Capitol in Washington on Dec. 15, 2009. (Kevin Lamarque / Reuters)
--

What the hell are the Republicans thinking?

That’s the implicit question driving much of the media coverage of the right’s adventures on the contraception front, from an aspirin-between-the-legs "joke" to an all-male revue’s passing as a congressional panel: Are Republicans really willing to raise the specter of their retrograde thinking when, as research has shown, so many American women have counted on contraception at some point in their lives?

It’s a provocative question, but the chatter in Republican circles is that it’s also one that’s beside the point. Sure, the contraception issue might have been foisted upon them by a complicit George Stephanopoulos when he asked about the possibility of states banning contraception during a January New Hampshire GOP presidential debate. (Prompting the classic Romneyism: “George, this is an unusual topic that you’re raising.”) But rather than run away from it as a political loser or liberal ambush, some Republicans are seeing an upside in the raging debate: It’s a chance, they argue, to prove to Americans that Barack Obama truly does want to weasel his way into every aspect of American life. And they’re counting on voters to recognize that fact come fall.

“It’s not really about whether contraception would be included in insurance coverage,” says Tim LeFever, talking about the approach to including birth control in the plans of religious employers that the Obama administration is selling as a compromise with the Catholic Church. LeFever runs the Capitol Resource Institute, a Focus-on-the-Family-type group, and is a California real estate lawyer. Access to contraception is settled law, he points out, some 50 years after the Supreme Court’s landmark decision in Griswold v. Connecticut. “It’s that with our country’s tradition of religious liberty, Obama would step in like he did. Very few people consider the compromise anything more than a wink and a nod. Most of us say, 'Of course we’re still paying for it. You’re still going to war against our conscience.' ”

What it’s really about is the Obama administrations desire – no, need – to inject itself into aspects of American life that were once beyond the government’s grasp. Starting, of course, with healthcare.

“What we’re seeing with preventive services is the tip of the iceberg as Obamacare goes into its implementation phase,” says Jennifer Marshall, director of domestic policy studies at the DC-based Heritage Foundation. “There are a number of morally fraught questions that in the past we’ve been able to determine the answer to ourselves, but where we’ve not handed the moral compass to regulators."

Here, it’s the Catholic Church’s stand on contraception. But next it will be the Obama administration’s involvement in parental decisions about their own children’s health needs. Conservatives warn that these choices are going to be standardized from here on out, the inevitable byproduct of a centralized approach to healthcare. That the government is determining which questions of conscience or cost should apply to a healthcare quandary isn’t just a problem for religious institutions, argues Marshall. It’s something that makes small business owners uneasy as they look at what in-the-weeds decisions about the provisioning of services the government will make next.

And in that, Marshall finds support from the pollsters. Ed Goeas runs the Tarrance Group, a Republican polling and strategy firm. “Forcing a church hospital or a church school to move against the ideas of the church is really one step away from doing the same on abortion,” says Goeas. “Abortion is legal in this country, but there’s always been a question about access. What do you do about low-income [women], about the military? That’s a leap forward,” says Goeas. “But slippery slope arguments are persuasive with voters. Infringements on religious freedoms is a persuasive argument with voters.”

That Democrats have been eager to parlay the Republican reaction to Obama’s contraception decision, and the subdebates that have rippled from it, into a “war on women,” to borrow a phrase that has been much in the air over the last few weeks, isn’t necessarily causing a great deal of agitation, either.

“It’s such a fantasy,” says Cindy Graves, president of the Florida Federation of Republican Women. “I’m offended as a woman. It’s part of a ploy to rally women, but I can’t believe that anyone actually believes that hyperbole.” LeFever, who has worked to rally evangelical's behind Rick Santorum, says he understands that  his candidate's musings about the dangers or birth control might be coming across as “moralizing or judgmental.” But, he says, “what I don’t get is the fear or hysteria.”

What sort of political legs does the “war on women” slogan have, I asked Goeas. He let out a hearty laugh. “It fits into the category of ‘nice try.’”

Goeas puts some numbers behind that take. “Many of the women that react that way” – as in, who come away from the present debate over contraception with the idea that Republicans are eager to whittle down their right to conceive and bear children as they see fit – “aren’t Republican voters to begin with.” According to a new poll of 1,000 likely voters to be released next week, says Goeas, Republicans and Democrats do equally well on the question of which party best shares their values, tied at 46 percent. There’s only a tiny gender gap. Men lean 48 to 45 percent Republican, while women lean towards Democrats at a rate of 47 to 43 percent.

“If you’re looking at whether in fact Republicans are losing women, you can’t just look at young women, or young single women, or African-American women, or Hispanic women – you have to look at the demographics where Republicans have been strong – white women, for example, or senior women.” Slippage among those groups would be cause to worry, says Goeas. “And I’m seeing no sign of that.”

“In the general [election],” he went on, “I think you’re going to find that this is a trap for the Democrats. They’re not going to score as many points with it as they might think. Even though you’re seeing a slight edge for the president on the generic ballot, with Catholic voters he’s trailing behind a Republican candidate as much as 20 percent.”

About a quarter of the American population is Catholic, points out Goeas. That’s a considerable number of voters who might be persuaded by Obama’s stance on the contraception question. Then there's a group that Goeas calls a “subtle army,” those religious voters who, beyond just Catholics, might see worrying signs in the newly hammered-out birth control policy. Add to that the swing voters who might be nervous about the federal government’s high-profile involvement in everything from healthcare to, say, the automobile industry. This analysis shows why even vote-counting conservatives aren’t bothered by talking contraception day in and day out.

At the very least, Republicans comfort themselves with the expectation that come November, the nuances of contraception won’t be much on the minds of voters one way or another. Graves, the Florida grassroots leader, admits that the optics of the guys-only House hearing on contraception weren’t all that spectacular. “Anyone who plans things for a living should have had a more diversified panel,” she concedes. “But with the Middle East blowing up and gas prices up to $5 – so you can’t even afford to drive yourself to the hospital to have a baby – I think we’re really off message.”

That’s the hope, at least, among Republicans – that what women will take away from the great contraception debate of 2012 isn’t that Republicans want to roll them back to the days when women were saddled with figuring out how to manage the trickier aspects of their sexual and reproductive lives, and to do it quietly, at their own expense, and without making a fuss of it.  To Republicans, the lesson they’re hoping voters take from this moment is that there’s nothing left in American life that Barack Obama is content to let pass quietly, without making a big fuss.