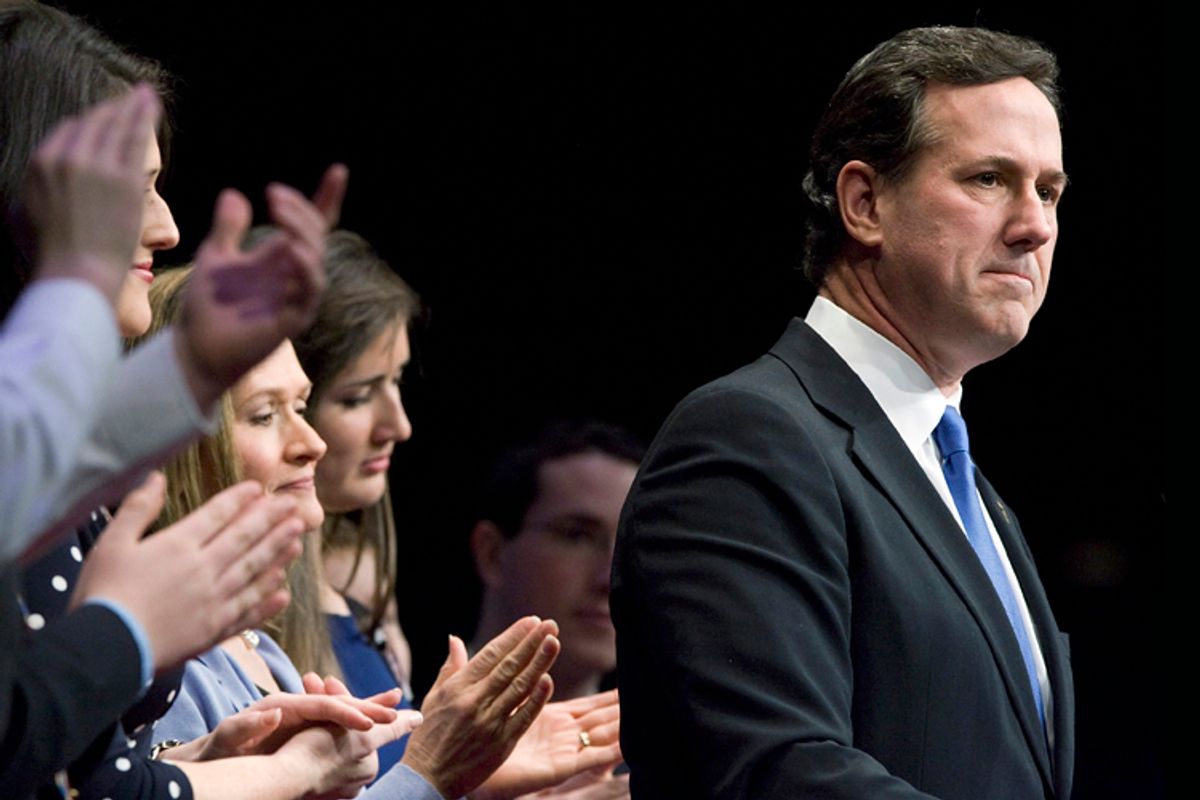 Republican U.S. presidential candidate Rick Santorum is applauded by members of his family during remarks to the CPAC in Washington (Jonathan Ernst / Reuters)
--

As the Los Angeles Times recently noted, Republican presidential candidate Rick Santorum is probably "the most prominent home-schooler in America." Indeed, the fact that Santorum's seven kids have largely been educated at home (two of them are now adults) is a key aspect of Santorum's appeal to his right-wing base. Of course, home-schooling is a popular issue in its own right, especially among religious conservatives, but its symbolic importance goes much deeper than that. It also symbolizes Santorum's self-presentation as a man of firm principles and unbending anti-government convictions, in obvious contrast to some flip-floppy, Obamacare-loving, one-time Northeastern governor one might mention.

As a home-schooling parent on the opposite end of the political spectrum from Santorum, I've observed his emergence -- and, to a lesser extent, that of Denver Broncos quarterback Tim Tebow -- with a certain queasy fascination. It's difficult to imagine a hypothetical universe where I'd ever vote for Santorum for anything, but sometimes his rhetoric on home-schooling strikes one of those weird political nerves where the quasi-libertarian right and the quasi-anarchist left hold similar views. In a recent Ohio speech, for instance, Santorum described the predominant model of public education as an artifact of the Industrial Revolution that has become ill-suited to a post-industrial age: "People came off the farms where they did home-school or had a little neighborhood school, and into these big factories ... called public schools.”

That's a crude but historically accurate summary, and many of the home-schoolers I know in New York City and other non-heartland locations would agree that that legacy -- standardized education aimed at creating a standardized workforce -- is problematic. In Santorum's 2005 book "It Takes a Family," he offered a defense of the age-diverse, socially mixed context of home-schooling that could just as well have been written by a utopian educational reformer in Boston or Berkeley: "In a home school ... children interact in a rich and complex way with adults and children of other ages all the time. In general, they are better-adjusted, more at ease with adults, more capable of conversation, more able to notice when a younger child needs help or comfort, and in general a lot better socialized than their mass-schooled peers."

As Dana Goldstein's recent attack on home-schooling in Slate reveals, the issue lays bare an intriguing split among progressives between the competing or complementary values of communal responsibility and individual freedom. Suffice it to say, however, that no one on the left, either hippie home-schooler or an ardent public-school advocate, is likely to agree with Santorum's radical remedies. It's difficult to tell exactly what he has in mind, but it seems to involve defunding both federal and state support for public education, and forcing poor or middle-class families -- indeed, almost everyone who works for a living -- into a Darwinian struggle over educational resources.

Many Christian and/or conservative home-schoolers are understandably eager to embrace Santorum (alongside Tebow) as the movement's leading public face. But even on the rightward fringe, the chorus of praise is not as unanimous as you might think, and Santorum's fans are distinctly on the defensive. If I had to guess, I would speculate that actual home-schoolers, as opposed to conservatives who find it appealing in the abstract, remain somewhat uncomfortable with Rick Santorum. That's because his rhetoric -- his promise to be a forceful advocate of home-schooling as president, and to continue home-schooling his own kids in the White House -- does not square with his own family's history, which in turn calls the whole Santorum narrative of supreme rectitude and impeccable character into question.

As various media outlets from Mother Jones to the Washington Post have reminded us in recent weeks, Santorum's record as a home-schooler is ambiguous at the very least, and arguably hypocritical. From 2001 through at least 2004, when Santorum was serving in the Senate and living full-time in Loudoun County, Va., five of his children were enrolled in an online charter school based in Pennsylvania -- a public school, albeit an unusual one -- with computers, curricula and other educational services provided at taxpayer expense. According to the Penn Hills Progress, a newspaper in Santorum's suburban Pittsburgh hometown that broke the story at the time, the local school district had spent approximately $100,000 educating the senator's so-called home-schooled children, although they lived neither in the district nor in the state.

Santorum owned a modest three-bedroom, 2,000-square-foot house in Penn Hills (and reportedly still does), on which he paid about $2,000 a year in taxes. But owning a home is not sufficient to prove residency, and public records, neighborhood testimony and common sense all suggest that Santorum's constantly enlarging family -- his kids now range from age 3 to age 20 -- never actually lived there. (At the time of the Penn Hills Progress investigation, Santorum's wife's niece and her husband were registered to vote at that address.) Appearing to live in Pennsylvania was distinctly advantageous for the Santorums, because state law required school districts to pay 80 percent of the online charter-school tuition for local families who chose it. (No such law pertained in Virginia.) The Penn Hills district challenged Santorum's local residency, and the ensuing dispute only ended when the senator withdrew his kids from the Pennsylvania Cyber Charter School. Since 2006 the Santorum kids have reportedly been registered as Virginia home-schoolers.

When Penn Hills tried to bill Santorum for $72,000 that the state had withheld from the local education budget to cover the senator's kids' online tuition, he refused to pay. In the end, the Pennsylvania department of education was forced to refund most of that money to the local district. In other words, the Santorums presented themselves to the world as home-schoolers for at least three years, while Pennsylvania taxpayers picked up the bill for their kids' education -- and they actually lived in a different state. For a private citizen, this would have been an embarrassing ethical lapse, but somewhat short of criminal misconduct. For a politician whose reputation rests upon issues of character and integrity, it's considerably more damning.

Speaking personally, I'm not opposed in substance to the choices Santorum made about educating his own children, and the way the former senator's political rise has pushed home-schooling onto the national agenda may end up being useful. Like most home-schoolers, irrespective of religion or politics -- and like most other parents, for that matter -- I support exploring widespread possibilities for educational reform. The Pennsylvania law that allows parents to pursue a de facto version of home-schooling that is publicly funded, and therefore hews to the norms and standards of public education, is interesting in theory, although I don't know much about it in practice. (The Pennsylvania Cyber Charter School, which Santorum's kids attended, has been embroiled in various controversies and has delivered mixed academic results.)

But railing out loud against the public funding of education, while taking advantage of it yourself under sneaky or deceptive premises, is something else again. That's an altogether too familiar ingredient of American know-nothing conservatism, which has long been rooted in rural areas of the country where residents are, on average, far more dependent on federal or state support than people who live in cities or suburbs. From here, Rick Santorum does not look like an independent-minded man of principle, however misguided -- and still less like a model home-school parent. He looks like another angry white guy who wants to cut taxes and slash government and declare his John Wayne independence from society, but is still delighted to spend other people's money on his own kids.