Mitt is choking in Michigan

He’s lucky the primary is tomorrow, and not a few days from now ... 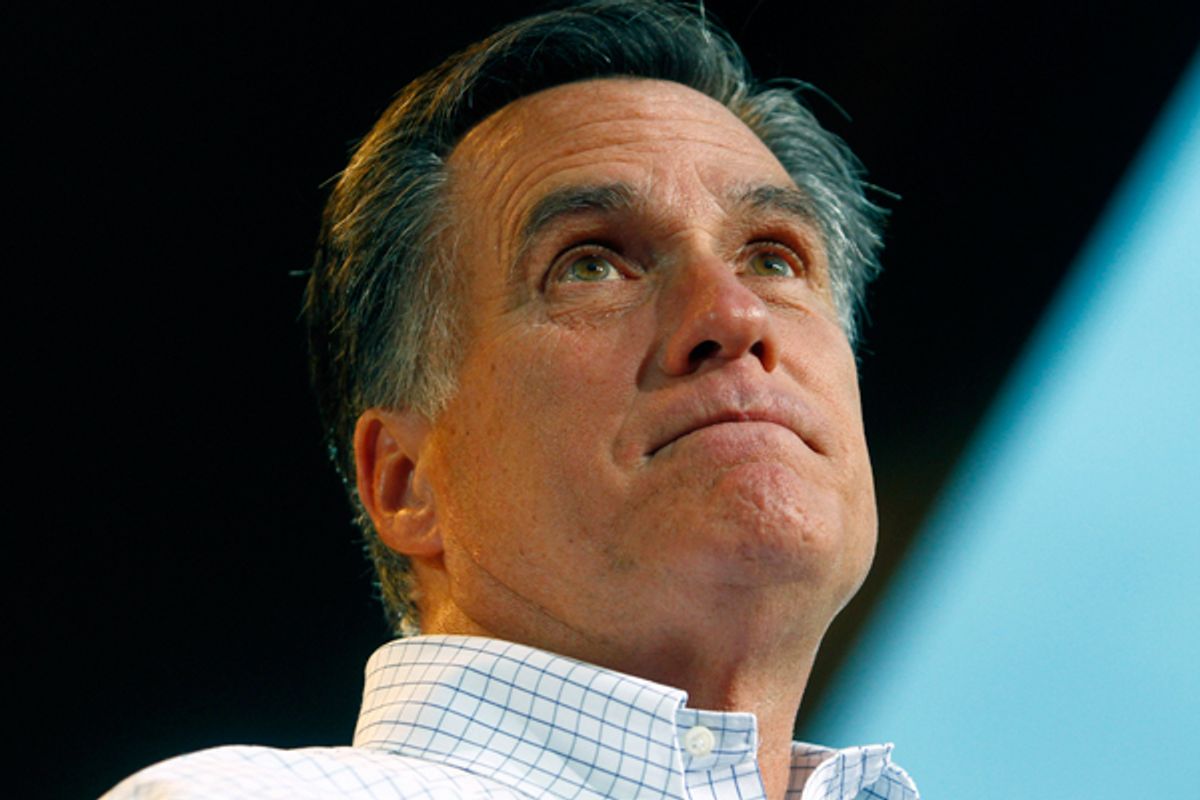 Two weeks ago, polls showed Romney falling significantly behind Rick Santorum in the state and nationally, this on the heels of Santorum's surprising sweep of Minnesota, Missouri and Colorado. But in those contests, Santorum had succeeded in part because he'd mostly been left alone by Romney and Newt Gingrich, giving the former Pennsylvania senator astronomical popularity in all three states. In Michigan, though, he had Romney's (and the entire political world's) attention. Romney's campaign began issuing daily attacks on Santorum, filled the airwaves with ads and watched as its super PAC friends did the same. And Romney, as he always seems to when his back is against the wall, turned up the heat in last week's debate with remarkable effectiveness, forcing a shaky performance by Santorum that damaged his standing with Republicans.

All of this put Romney in a seemingly strong position late last week, when he began moving past Santorum in Michigan polling and catching him in the national horse race. It looked like Romney might be able to put some real distance between himself and his rival. But a new batch of polling data suggests his momentum stalled right at that point, and that if anything the race has tightened since then. A PPP poll released overnight gives Romney a slim 2-point edge over Santorum, while Mitchell/Rosetta Stone puts Santorum ahead by 2 -- a reversal from last week, when Romney led the same poll by 3. "We believe the race has shifted since our Thursday survey," Rosetta's pollster said in a release.

What's happened since Thursday? The Rosetta folks seem to chalk it up to Santorum's recent culture war rhetoric:

Santorum seems to have reversed Romney's inroads into key conservative demographics. In our poll Thursday night, Romney had erased a 16% lead Santorum had with Tea Party supporters. Now, Santorum is back ahead with those voters by 6%. Romney cut a 16% Santorum lead among Evangelicals to 7%. Now, Santorum has moved his lead out to 19%. And Romney had cut a 31% lead Santorum had with "very conservatives' down to 13% Now, that lead is back up to 17%. Santorum's strong appeal to social conservatives has been very effective.

But I wonder how much of it simply has to do with the negative press Romney has been receiving since last Thursday. Since then, his informal anti-Santorum alliance with Ron Paul has attracted considerable attention, and the optics of his major economic speech last Friday -- 1,200 people in a stadium that fits nearly 70,000 -- dominated the news over the weekend. There was also his reference to his wife driving "a couple of Cadillacs" and his Sunday boast at Daytona that "I have some great friends who are NASCAR owners." Could it be that all of the negative noise generated by this is causing his most hesitant Michigan backers -- the social conservatives among whom he'd made such tenuous inroads -- to walk away?

Whatever the reason, Michigan doesn't look like it will be a repeat of Florida, where Romney's main foe melted down and lost by 14 points. Santorum, for all of the grief he's caused himself these past few weeks, still has a chance to pull out a victory. In fact, he might now be the slight favorite if it weren't for early voting; PPP found that among the 16 percent of primary voters who have already cast ballots, Romney crushed Santorum by 33 points. Among those who haven't voted yet but are likely to do so tomorrow, Santorum is actually up by 5.

Maybe early voting has created too deep of a hole for Santorum to escape now. But if he ends up making it a long night and only falling a point or two short, how much of a win will that be for Romney? How the political world interprets a result like that may be the key to where the GOP race goes after Michigan.