The stimulus plan that Romney forgot

The Republican front-runner runs away from another part of his record: His $700 million jobs plans in Massachusetts 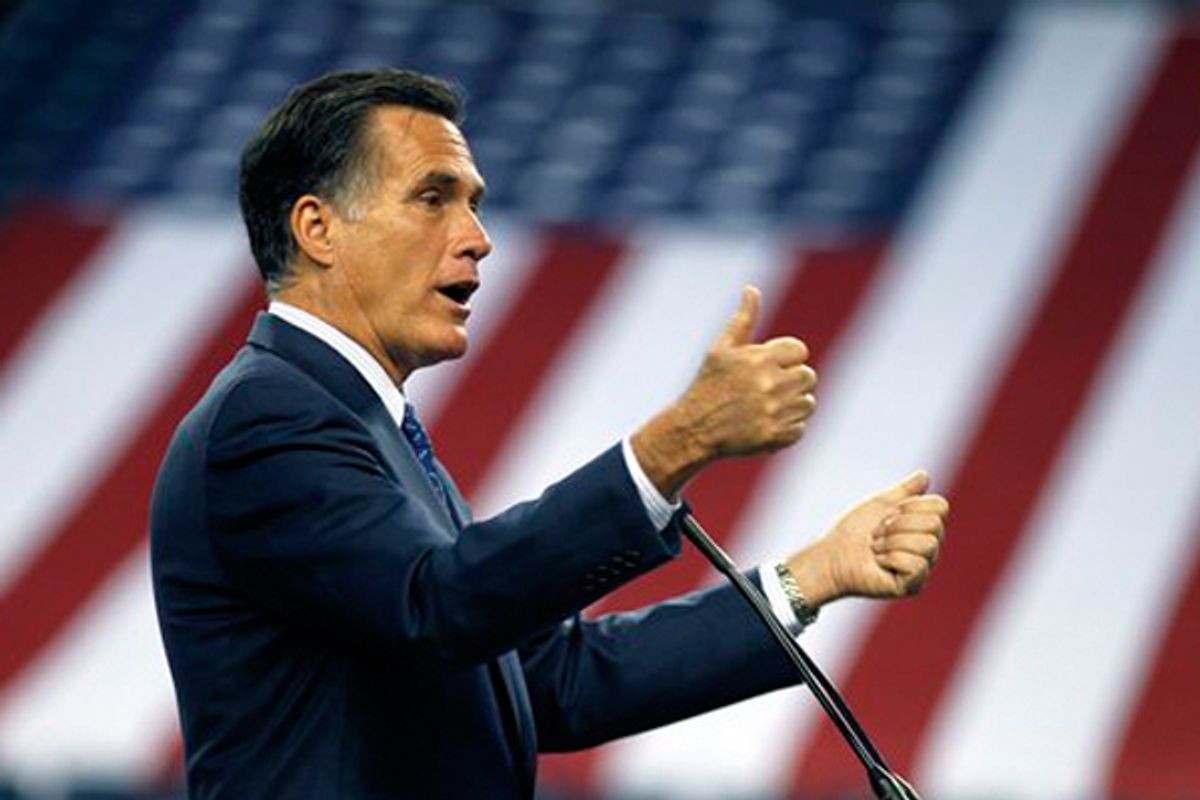 With polls showing a tightening race, Rick Santorum leveled a broadside at rival Mitt Romney in this morning's Wall Street Journal, suggesting the Massachusetts Republican had a "last-minute conversion" to conservative principles and was trying to distract voters from a liberal record of taxes and fee hikes as governor.

Barnstorming through Michigan, Romney returned fire by telling the Boston Globe, “It's time he focuses on the economy … if the economy’s going to be the issue we focus on, who has the experience to actually get this economy going again?”

But Romney’s track record in Massachusetts for getting the economy moving may not be reassuring to conservatives.

As governor, Romney proposed more than $700 million in economic stimulus in a pair of packages over three years to right a sickly state economy that shed thousands of jobs before he took office, including offering to hand employers $30,000 for each worker they hired, even though he now bashes his Republican and Democratic foes over wasteful government spending.

As he stumps in Michigan, experts say this is yet another example of how Romney’s moderate governing style clashes with his conservative campaign attacks against Republican and Democratic rivals, amplifying Romney’s image as a candidate without a core.

“This has been his greatest vulnerability,” said Julian Zelizer, a Princeton University political scientist. “He looks like a guy who’ll say anything to win, and it’s a problem.”

Romney, like Obama, inherited a disaster. By the time he took office in January 2003, the Massachusetts unemployment rate rose to 5.8 percent from 5.3 percent a year earlier, and 66,000 fewer people had jobs, according to the Bureau of Labor Statistics. And his Republican predecessor left him a $3 billion budget deficit.

That year, Romney balanced the budget with Democrats by cutting spending and raising fees without hiking taxes (although some critics argued the fees amounted to tax hikes).

Romney’s first stimulus proposal in 2003 was a relatively narrow $125 million one. Eventually, Romney and the Democrats agreed on a $100 million version with tax credits and grants to promote the high technology industry. But the governor vetoed workforce training grants used to upgrade workers’ skills.

Two years later, Romney was eyeing a presidential bid, and job creation stubbornly lagged (Massachusetts would place 47thin the nation in job creation under Romney according to Northeastern University’s Center for Labor Market Studies). This time, the governor went big. In February 2005, Romney unveiled a sweeping $600 million stimulus package to kick-start the economy and create 20,000 jobs over five years.

“We've been doing the same thing, year after year,'' Romney told the Greater Boston Chamber of Commerce, according to accounts at the time. ‘‘Let's do something different. Let's learn from what the other states that are actually gaining new employers are doing.''

The biggest big-ticket item was $300 million in bonds diverted for transportation projects, some of the money going straight to private companies’ infrastructure improvements. He’d also put about $250 million back into employers’ pockets but let them skip tax payments to the state’s jobless benefits fund for a year – this was controversial, since the fund was just beginning to build itself back up after the recession.

Most controversial: Romney wanted to spend $37 million to create new jobs by offering employers $30,000 for each new person they hired.

That piece was a dud with budget hawks like Michael Widmer, president of the nonpartisan Massachusetts Taxpayers Foundation, who felt it was a giveaway to businesses that never had to prove they needed the dough or they’d keep the workers after taking the cash.

“We’ve never been fans of direct payments for hiring individuals,” Widmer said. “Those have not shown to be particularly effective. We felt the Legislature was wise not to go along with his proposals.”

In January 2006, as Romney prepared to deliver his State of the State address, his spokesman Eric Fehrnstrom pressed to get the public behind the Republican stimulus. The quote sounds like it could have come from President Obama, even though it comes from one of Romney’s current strategists.

"When we came into office, the state was losing jobs by the thousands every month," said Fehrnstrom at the time. "Today we are adding jobs, and the unemployment rate is almost a full point lower [than] it was when we took office. But we have more work to do."

But Democrats, not wanting to give Romney a win, passed their $700 million stimulus bill in June – which Fehrnstrom hoped would “give a shot in the arm to the economy.”

Romney’s push for stimulus help was not unusual – or wrong, said Widmer. States can’t run deficits the way the federal government can, and it’s only at the national level that Republicans appear opposed to pumping money into the economy.

“He proposed the kind of spending that Democrats and Republicans have done in Massachusetts for decades, and there was no reluctance on his part to do it,” Widmer said.

As tomorrow’s vote in Michigan looms, Romney took to the airwaves to assure voters he’s a conservative through-and-through.

“The biggest misconception is that I come from Massachusetts, so I can’t be conservative,” Romney told Fox News host Chris Wallace, before ticking off by campaign-trail-rote a record as Massachusetts governor that included balancing budgets, cutting taxes 19 times and being pro-life.

The misconception is not unfounded.

Just days earlier, Romney strayed from conservative talking points by telling a Michigan audience spending cuts during a recession slows economic growth – only to have his campaign briskly walk those words back after a scolding from the free-market Club for Growth for his heresy.

There’s a danger to Romney reversing course from the moderate path he pursued as a governor, Zelizer said, as he blasts Santorum for being a big government Republican or Obama for the $787 billion stimulus and pumping money into the auto industry. Even worse, he added, is when his campaign crew doesn’t seem aware of its blunder.

“Romney tries to make dramatic statements about Obama and his opponents, yet his staff must know it contradicts his record,” Zelizer said. “This undercuts him and dampens enthusiasm for him.”

Lucky for Romney, his native state knows his record and the GOP field is weak enough that he can get away with what otherwise would be fatal flaws in another candidate, said Matt Grossman, a political scientist at Michigan State University.