The terrifying race to the loony right

As Santorum and Romney battle for the extremist vote, progressives should be worried, not gloating 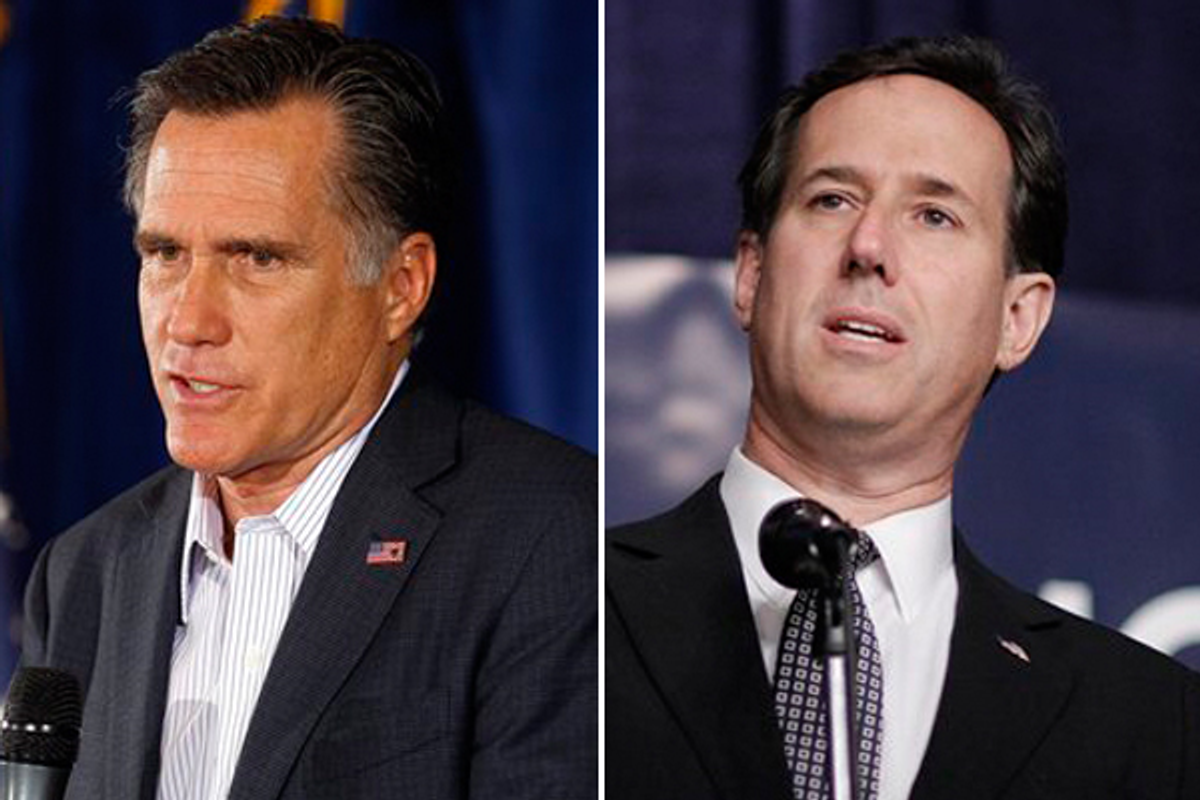 My father was a Republican for the first 78 years of his life. For the last 20, he’s been a Democrat (he just celebrated his 98th). What happened? “They lost me,” he says.

They’re losing even more Americans now, as the four remaining GOP candidates seek to outdo one another in their race for the votes of the loony right that’s taken over the Grand Old Party.

But the rest of us have reason to worry.

Yet even if they lose the presidency on Election Day they’re still likely to be in charge of at least one house of Congress as well as several state legislatures and governorships. That’s a problem for the nation.

The GOP’s drift toward loopiness started in 1993 when Bill Clinton became the first Democrat in the White House in a dozen years – and promptly allowed gays in the military, pushed through the Brady handgun act, had the audacity to staff his administration with strong women and African-Americans, and gave Hillary the task of crafting a national health bill. Bill and Hillary were secular boomers with Ivy League credentials who thought government had a positive role to play in people's lives.

This was enough to stir right-wing evangelicals in the South, social conservatives in the Midwest and on the Great Plains, and stop-at-nothing extremists in Washington and the media who hounded Bill Clinton for eight years, then stole the 2000 election from Al Gore, and Swift-Boated John Kerry in 2004.

They were not pleased to have a Democrat back in the White House in 2008, let alone a black one. They rose up in the 2010 election cycle as “tea partyers” and have by now pushed the GOP further right than it has been in more than 80 years. Even formerly sensible senators like Olympia Snowe, Orrin Hatch and Dick Lugar are moving to the extreme right in order to keep their seats.

At this rate the GOP will end up on the dust heap of history. Young Americans are more tolerant, cosmopolitan, better educated and more socially liberal than their parents. And relative to the typical middle-aged America, they are also more Hispanic and more shades of brown. Today’s Republican Party is as relevant to what America is becoming as an ice pick in New Orleans.

In the meantime, though, we are in trouble. America is a winner-take-all election system in which a party needs only 51 percent (or, in a three-way race, a plurality) in order to gain control.

But here, as we’re seeing, a loony fringe can take over an entire party — and that party will inevitably take over some part of our federal, state and local governments.

As such, the loony right is a clear and present danger.