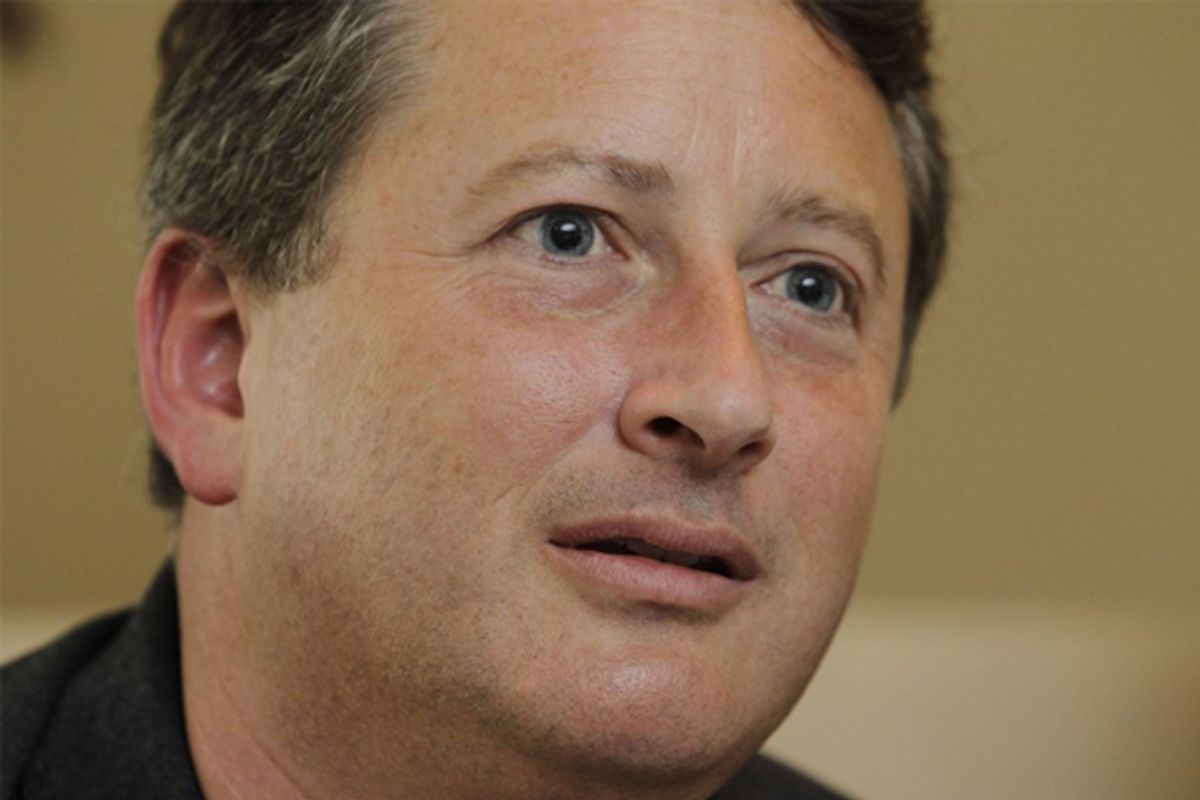 So long as you're a Republican, you won't spend any time in jail for voter fraud. And, if you're Charlie White, Indiana's lucky, now-former Republican secretary of state who received just one year of home detention for all of those crimes, you'll likely be "elated," just as White was after his sentencing hearing last week.

Less happy are those legal voters who have been kept from voting at all under the  laws that White supported -- and then violated -- during his run to become secretary of state in 2010.

White received one year of home detention -- one year for each of his six convictions, to be served concurrently -- plus a $1,000 fine and some community service. He was found guilty of, among other things, having lied about his home address, registering to vote from that address, receiving a salary from an elected position as a town council member from that address, and then having voted from it while winning the position of secretary of state. While White, as per Indiana law, is unable to serve in office as a convicted felon, over all he got off easy.

Prude and Ali fell victim to the George W. Bush U.S. Dept. of Justice, which was funneling unprecedented resources intoferreting out alleged cases of “voter fraud” – or anything that even looked like it — in order to lay the groundwork for polling place photo ID restriction laws around the country. Their prosecution for crimes that looked like "voter fraud" helped create a record that could be used to justify restrictive identification requirements on voters at the polling place, very much like the one first passed in White’s Indiana in 2008.

What White did was intentional, as two different judges have now found. For Prude and Ali, whose actions accidentally violated the law, enforcement was extraordinarily harsh and backed by the full force of the federal government.

Prude, a 43-year-old African-American woman from Milwaukee, was convicted of cashing a counterfeit check for $1,254 in 2000. She never served any jail time but was  still on probation four years later, at the end of 2004, when she attended a Democratic election rally. Marching with others to City Hall that day, Prude registered to become a voter and later voted by absentee ballot, since she had also signed up to serve as a poll worker and therefore wouldn't be available to vote in person on Election Day.  Since she hadn't served time in jail, she thought she was permitted to vote, but later found out from her probation officer that she was wrong. She immediately called City Hall in hopes of rescinding her vote. Her thanks for doing so? She was convicted of felony voter fraud by the U.S. attorney in the state of Wisconsin and sent to prison for more than a year.

Ali, on the other hand, a 68-year-old Pakistani-born jewelry store owner in Tallahassee, Fla., didn't cast a vote at all. When Ali went to renew his driver's license at a Florida DMV, he was handed a stack of forms to fill out by the clerk. One of them, it turns out, was a voter registration form. He says he hadn't noticed that it was only for U.S. citizens and, in any case, he never actually voted. Ali's unintentional voter registration crime, a federal misdemeanor, resulted in his deportation back to Pakistan, though he had legally lived in the U.S. for more than 10 years. He would be a stranger in his own country. It would be worse for his American wife and American daughter who had never lived there at all.

White has yet to accept responsibility for intentionally defrauding the state of Indiana, as two different judges, in two different cases, have now found that he did. In an interview with Fox "News" after the jury's verdict was read in early February, White called the convictions "a total miscarriage of justice" and "a perversion." But when making his case to Hamilton Superior Court Judge Steven Nation during his sentencing hearing, White expressed contrition.

"White seemed to apologize for that interview in a statement during his sentencing hearing," according to the Indianapolis Star. "He also said he never intended to commit any crimes and asked the judge for leniency so his family wouldn’t suffer and he could move on with his life."

His wife, says the paper, made a similar case to Judge Nation in hopes of keeping her husband out of jail. "I just want my husband back," she said. "We have a family to raise and I can’t do it alone."

White will be appealing the verdict, so the judge has postponed his home detention until after the appeal has been heard.

White is also appealing a separate guilty verdict, in a civil case filed by the state Democratic Party. In that case, the judge found White ineligible to have been on the ballot when he was elected in 2010, and so ordered him immediately replaced by the second-place winner, Democrat Vop Osili, as per state law at the time. That ruling has been stayed during White's appeal, and Republican Gov. Mitch Daniels has temporarily appointed White's deputy as secretary of state pending a ruling by the state Supreme Court as to whether he will be replaced by Osili, as ordered in the civil case, or permanently replaced by someone of Daniels' choosing following the felony convictions.

Perhaps the cruelest irony in all of this? Neither Prude's nor Ali's case would have been deterred by the polling place photo ID restriction laws now in effect.  In fact, during the Bush administration's unprecedented years-long attempt to prosecute "voter fraud" cases, they were unable to find a single case of in-person polling place impersonation -- the only type of voter fraud such laws might serve to deter -- across the entire nation.

None of that stopped them pretending that "voter fraud" is a real problem.  None of that stops Republican politicians and pundits from pretending that there is a voter fraud epidemic warranting such draconian laws, even though they know they are doing little more than hoping to discourage turnout among voters who don't have driver's licences -- mostly older poor people, minorities and students who tend to vote Democratic -- and thus stack the electoral deck in their favor.

The message from White and Indiana Republicans, no matter what they say out loud and on Fox News, is very clear: If you commit voter fraud, just make sure you're in the right party, because... it's okay, if you're a Republican.