But we do need good political reporting, and the media's rote repetition of Santorum's JFK lies fell short 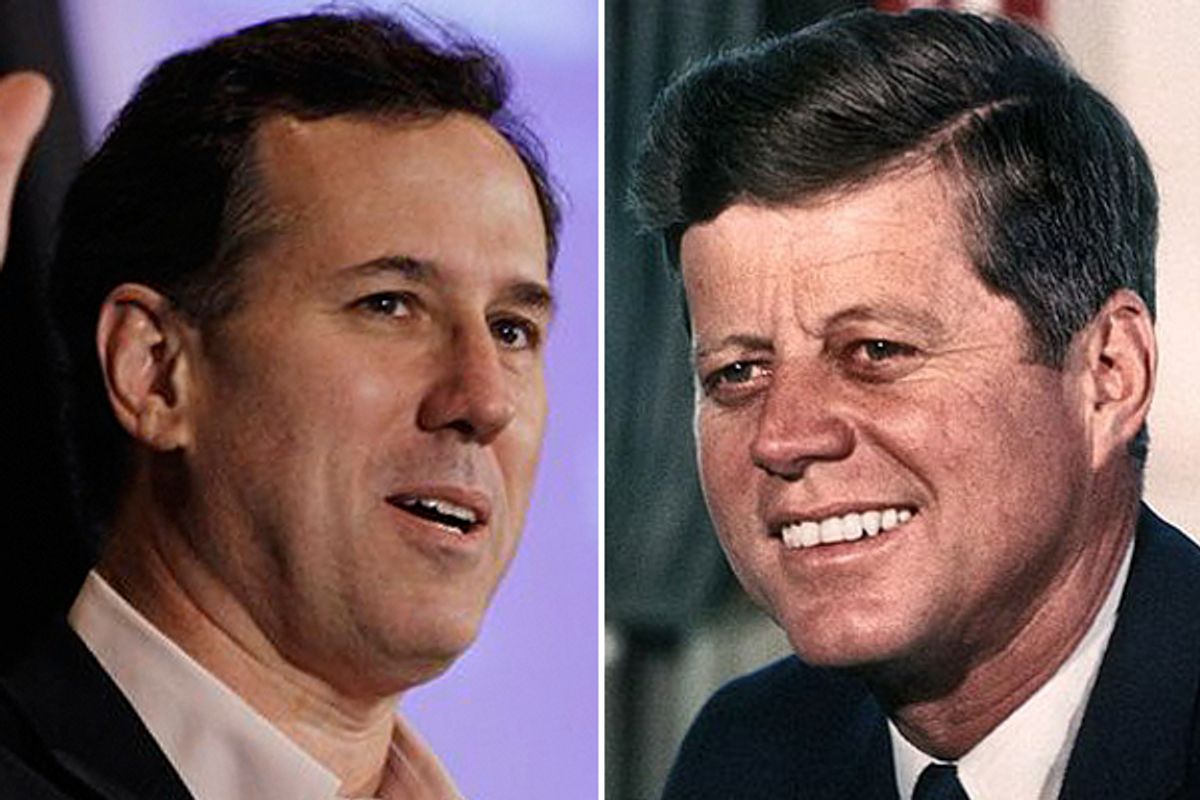 New York Times public editor Arthur Brisbane got a lot of grief last month for a blog post in which he asked readers whether the Times ought to be "a truth vigilante." I didn't join the pile-on, because truth be told, I kind of understood what he was getting at. Sure, "truth vigilante" is a shrill, easily mocked term: It doesn't take "vigilantism" to get at the truth, only good reporting. But there can be questions for editors and reporters about how far is too far – what's good reporting, and what's hectoring? What's debunking, and what's partisan water-carrying? (Also, I don't like the practice of mocking people for asking questions, even when we think the answer should be obvious. Better that Brisbane ask than to ignore the issue entirely.) I can understand why some cases aren't clear.

But now I have a case that's very clear for Mr. Brisbane: the Times' story on Rick Santorum's lies (yes, I call them lies) about John F. Kennedy's 1960 religion speech, headlined "Santorum Makes Case for Religion in Public Square." Since it's the New York Times and all, I don't expect the paper to call it a "lie." But the story contains not one word suggesting that Santorum might be, I don't know, misrepresenting, misremembering, distorting or otherwise being completely wrong about what JFK actually said.

I'm getting a lot of credit on Twitter and Facebook today for my piece, but this is one of those rare times when I'd rather not be recognized, because – don't tell my editors – what I did was easy. It took me exactly 10 seconds to Google JFK's speech and another few minutes to read it. Then I cut and pasted Santorum's comments next to JFK's and voila, kids, I had a story. The Washington Post's Jonathan Capehart credited me with a "deep-dive," and I appreciate the praise, but really, I barely got my feet wet. (The Post's own news story wasn't any better than the Times'; Capehart was the first person on staff to note Santorum's distortion more than 24 hours after it aired on ABC's "This Week.")

I assumed I'd be late to the Santorum story because I was sick yesterday and didn't even watch him live, I just heard about his remarks online. But I'm writing a book about the Democratic Party and Irish Catholics, and as you'd expect, there's a little bit about Kennedy in there, and so I thought I'd take a moment to explain what Kennedy said – and how rabid anti-Catholicism, as late as 1960, made it necessary.

I made a comment last week in passing that I'd like to elaborate on here: I've spent a lot of time, in the book as well as on Salon, pointing out the anti-Catholic Nativism that hobbled my people and that accounts for some of our pugilism, shall we say, in the public square. But Santorum makes me realize I haven't said enough about why some people were and still are suspicious of Catholics. His disrespectful comments about mainline Protestant churches somehow being agents of Satan is just one example of the contempt for other faiths that has gotten us in trouble over the years. I came of age after Vatican II; my parents were devout Catholic ecumenicists, attending seders at our local Jewish temple and telling the neighbors, no, we're not supposed to blame Jews for killing Jesus anymore, and Protestants love Jesus, too. Santorum is an example of the mind-set that liberal Catholics and lapsed Catholics have been fighting in my lifetime, and he's really a disgrace.

I don't expect the New York Times to call him a disgrace in its news pages, but I do expect the paper to do a minimum of fact-checking, to see whether our first and only Catholic president actually said what Santorum attributes to him. There was a reserved, respectful, Timesian way to do it, and the paper missed an opportunity to reassure its readers that the paper is all about the truth, and that it's not cowed into printing untruths by the GOP culture warriors who've spent decades now insisting the Times has a raging liberal bias.

I don't mean to single out Michael Barbaro, either, who does good work, or the team of writers the Times lists as providing additional reporting at the end of the piece. Or Kit Seelye, who wrote the earlier Caucus post, on a tighter deadline, about Santorum's remarks without fact-checking the JFK claim. I've always loved the singular way the paper almost always attributes mistakes, in its Corrections column, to "editing errors." This was an editing error. Someone at some point should have said, "Hey, I know you're on deadline – but what did JFK actually say?" It's not vigilantism. It's journalism.