In a new book, a female pioneer recalls navigating the sex and sexual politics of advertising's "gentlemanly" world 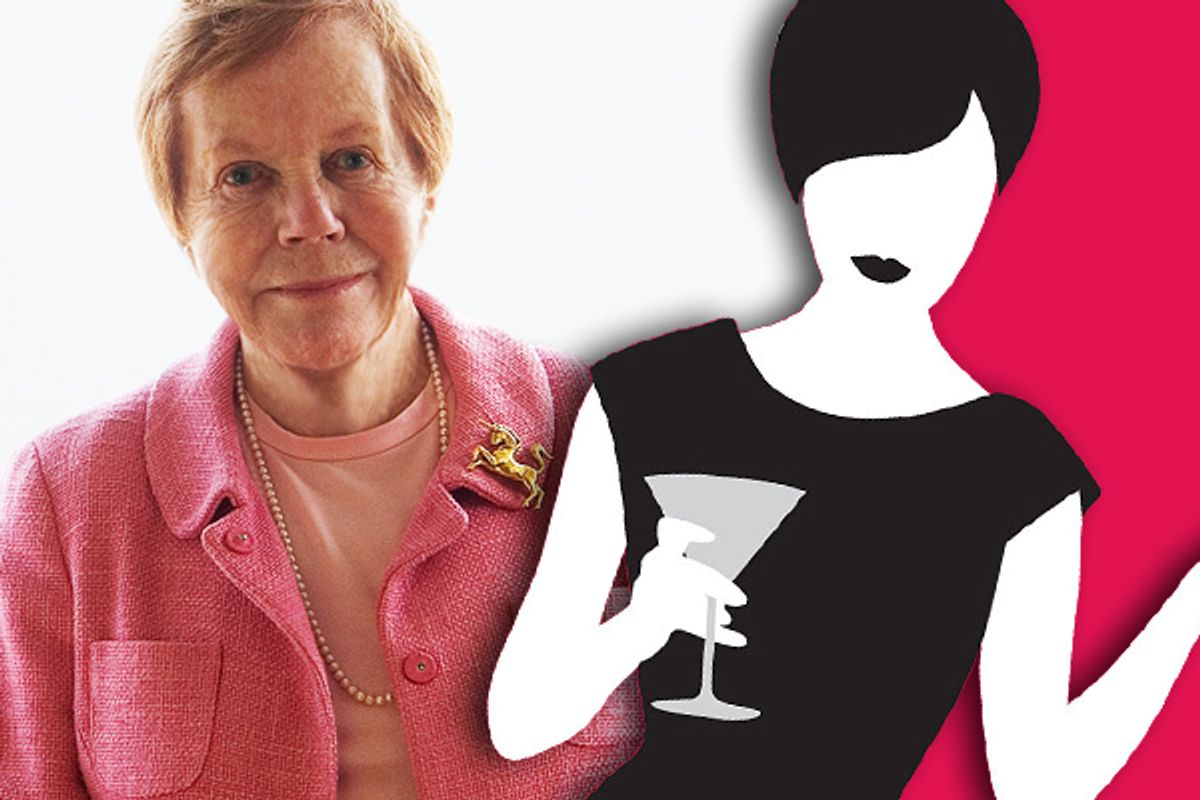 Since its inception, AMC's "Mad Men" has largely succeeded in making ad agencies of the '60s and '70s a subject of general fascination -- and with the show's season premiere only a month away, now is the ideal time to do some background reading.

In "Mad Women" -- part memoir and part informal survey of friends and colleagues -- former advertising executive Jane Maas (billed as a "real-life Peggy Olson") offers insights into the art of advertising, the pervasive "guilt" felt by working mothers past and present, and the culture of sex (and sexism) at the office.

In a phone interview, Maas expanded on the experiences she describes in the book, and graded "Mad Men's" accuracy against her personal experiences.

What was your first reaction to "Mad Men"?

Quite honestly, I was very surprised by how accurate it was in terms of the costumes and the sets and the props, and how everybody looks exactly how we looked. It was "déja vu all over again," in that sense. But I was almost equally shocked by the fact that it didn't feel like Ogilvy & Mather felt to me in 1964 when I joined. The people in "Mad Men" don't seem to like each other very much, [whereas] we were a band of brothers -- as most agencies were. In most agencies, there was a certain amount of jockeying for positions, but people really liked each other, and everybody worked very hard to make the agency win. But "Mad Men" is a drama. And so they need to have tension, of course.

It seemed to me they got a lot of things right, but they also have the very basic tone wrong -- probably deliberately, in order to make it have some drama to it.

Why do you think this time period, and the advertising profession in particular, seem to appeal to so many people today? At the time, would you have imagined that people would one day think of this environment as particularly sexy or wonderful?

That's a wonderful question. Absolutely no. I guess if somebody asked us right now, about this period we're living in, "Do you think in 60 years they're going to make a hit television series out of it?" We might say, "Oh, it's such a lousy time. Recession, wars, we're all so depressed and so harassed." Who knows?

Back then, I thought it was business as usual; you'd get up in the morning, and say hello to your family, and go off to work.

You discuss the "guilt" and anger that you and other working mothers felt -- the sense of being torn in several different directions, between work, husband, children, etc. Even though you felt that way, you also clearly enjoyed yourself a great deal -- you enjoyed the office, and the thrill of the work. Would you say it was all worth it? Do you have any regrets?

So you think this is a problem that's common to working mothers in almost any time period?

I was so struck by the fact that I was hearing the same words. It wasn't anything I planned, but I said, "Wow, something's going on here" -- so I spoke to a child psychologist, and I spoke to a couple of educators, and the answers I was getting are: Women are simply wired differently biologically. A man would throw money at the problem. He'd say, "I'm torn. I don't have enough time to spend with my children. Hire a nanny! If that doesn't work, hire two nannies." And a woman says, "I need to spend time with the children; I need to nurture them; they're my children."

You won the "Most Obnoxious Commercial of the Year Depicting Women" award from the National Organization for Women twice. Did you feel any gender disloyalty? Were you conflicted at all about creating the ads that won?

No, I wasn't conflicted. Not a whit. One of the products was Dove-for-Dishes -- Dove dishwashing liquid. The whole premise of Dove-for-Dishes is that it kept a woman's hands soft and smooth, even if she had to do a lot of dishes. The whole object there, the whole strategy behind the product, was that it was "made for a woman's hands." And the National Organization for Women berated me that I didn't have men doing the dishes. Well, that never crossed my mind, because it wouldn't have worked as strategically. And so I didn't feel a bit of guilt; in fact, I think when I won this award, I was kind of amused.

Even the second time?

Yes. Which is ... not at all what the National Organization for Women hoped that I would feel.

You were married while you worked in advertising. How different would life have been for a single woman working in the same office? Were you representative of the majority of your female colleagues?

There were very few working mothers at Ogilvy, because, as I wrote in the book, it just simply was not done in the '60s to work full-time if you had children under the age of 12 or so. Other women looked down on you and said, "What do you do if they're sick?" That was the first question you were asked. And men thought you must be married to a bum, otherwise why were you there working?

Office relationships are a key component of "Mad Men." You were able to observe them, but you didn't take part. Do you think most of your colleagues were having relationships or affairs?

A lot of them were. I began to realize why a lot of this was happening -- particularly with the very senior men. It was because the senior vice presidents and executive vice presidents of our agency (and probably every other agency) were the ones who got there at 7 in the morning, and stayed there until 9 at night, and then got on a train and got home to their suburban houses at God knows what hour. They weren't spending any time with their families; they weren't spending time with their wives. I think part of it was just pure sex, and part of it was that they were kind of lonely. Here were all these young women -- many of them single -- working as secretaries but wanting very much to get professional jobs, and they'd be happy to sit down and talk about the brands that these guys were working on, and the future of the agency, and what was going on in the office. And they were also sexually available. So a lot of the men fell in love with them, divorced their wives, and ended up marrying the women from the office. Most of the affairs were between slightly older men and slightly younger women, [with the women] tending to be single.

Did this ever make you feel uncomfortable?

It was just a reality of the office?

Yes. And I think we were all aware of it. There was very little gossip about it. David Ogilvy didn't like gossip. He acted as though he was completely unaware that any sexual activity was going on in his agency. I'm sure he was aware of it, but he never took part in any himself. Whatever affairs he was having -- and I gather he had a lot of them -- were totally extracurricular. Not ever anybody in the office. At least, as far as I know -- and I think the gossip would have spread like wildfire if David even blinked at anybody in the office.

You've written about your career before, in a book called "Adventures of an Advertising Woman" -- and you talk a little in your new memoir about how that book is different. With this book, did you feel a strong need to talk about themes and phenomena that are featured on "Mad Men," because of the show's popularity?

I was aware of the fact that the reason I was writing this book was the enormous interest in the show. As [I worked on it], though, this memoir began to take on a life of its own, and I began to see some of these other themes -- like the theme of working mothers' guilt -- start to emerge. That [theme] certainly does not show itself in any way in "Mad Men." (There's only one working mother in all of "Mad Men" so far, and she's the mother who lives near the Drapers; the other mothers, the stay-at-home moms like Betty Draper, look down on her with great disdain. They say she feeds her children frozen food; because she's working, she doesn't have time to make them wholesome meals.)

I think I felt honor-bound somehow, if I was going to call this book "Mad Women," to ask people about "Mad Men." I don't think I had a burning desire to make it a big theme. In fact, I know I didn't.

What is the most important thing you would tell young female fans of the show about your real life back then? Something that's left out? Or something the show gets exactly right?

I think what it's getting totally wrong is the lack of genuine admiration that people had for each other's talents. The show puts a lot of emphasis on the combativeness of people ... Everybody is eager to throw somebody else under the bus, and be able to step over that body and make their way up. In truth, we were a lot more gentlemanly, especially at the Ogilvy agency. There was a lot of ambition, but I don't think it was as ruthless. I think "Mad Men" has a certain ruthlessness about it, as does Don Draper; there's a ruthlessness there, in the way he treats his wife, in the way he treats his children.

In order to make our way to be equal with men, I still think women have to work harder than the man to the left of us or the man to the right of us. I think we need to work harder and work smarter -- and yet not show that we're working harder or working smarter. We have to do it without looking like we're aggressive, ambitious, overly assertive ...

Women have to get better about helping each other; we're not doing that well at all. Unfortunately, I think that most of the time, the more successful the woman is, the less likely she is to reach out a helping hand to others. I think successful women tend to say, "I made it by myself; let's see you do it." Young women need to know that you're not just going to sail along. That it's tough, it's challenging, but that it can be extremely rewarding and a lot of fun.