A famous Chicago factory gets Occupied 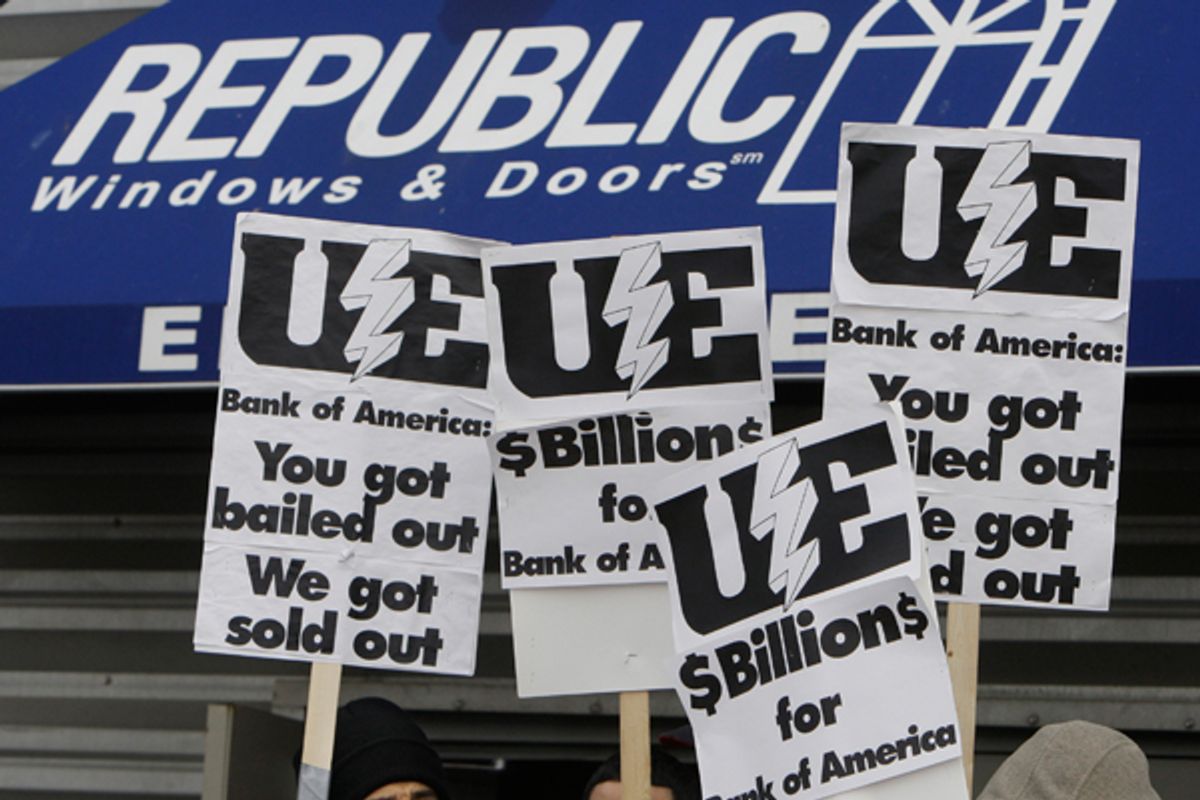 Workers picket at the Republic Windows and Doors factory in Chicago, on Dec. 8, 2008. (AP/M. Spencer Green)
--

CHICAGO — Leah Fried had seen this movie before.

In fact, she'd appeared in it. Fried is the union representative for workers at the former Republic Windows and Doors plant, site of the 2008 factory occupation in Chicago that captured national attention and appeared in Michael Moore's "Capitalism, A Love Story."

“It feels like déjà vu,” she said on Thursday night, standing at the again-occupied factory’s entrance.

She was in the same doorway she and factory workers had stood in three years earlier, when workers occupied the plant for six days demanding legally owed severance, accrued vacation time, and temporary health benefits. In 2012, the company logo on the door had changed, now reading “Serious Energy,” but the desolate industrial backdrop, the roar of passing semis, the miserable winter weather and the dramatic 1930s-era tactic of physically occupying a factory remained the same.

And, like in 2008, the occupying workers got what they demanded, raising the question of whether similar tactics will spread to other parts of the progressive movement in the near future. Such questions were raised after the Republic occupation, but further radical actions didn’t materialize. Now, however, in the wake of the national political shift engendered by the Occupy movement, the time might be right for progressives to engage in bolder actions.

The 2008 Republic Windows and Doors occupation captured national headlines, as it seemed to be a perfect parable of all that was wrong with the financial crisis: Just a few days after receiving $25 billion in bailout funds from the federal government, Bank of America cut off the company’s credit line, leading Republic’s management to immediately and unceremoniously fire all 250 workers without providing the 60 days' notice or 60 days' pay required of them by the federal WARN Act.

Rather than resigning themselves to their fate as a few of the many victims of a devastated economy, workers and their union, the small, fiercely left-wing United Electrical Workers, decided to do something bold: occupy the plant until the company agreed to pay them their severance.

The workers were eventually victorious, convincing Bank of America to reopen Republic’s line of credit so the workers could be paid what they were owed. What’s more, a new company, Serious Energy, bought the factory and pledged to rehire all of the fired workers.

Things looked hopeful for a time. Serious began production with a fraction of the former workforce, hoping that business would soon pick up. But it never did, according to Serious spokesman Michael Kanellos.

The union doesn’t dispute that business was less than stellar. “They were having a hard time getting a foothold in the Chicago market,” Fried acknowledges.

But in a meeting with local management downtown Thursday morning, workers were not told that the factory would be closing soon, the union says; they were told the closure would be effective immediately. When the union said it wanted  time to find a buyer for the factory so workers would not lose their jobs, they say the company refused. (In a statement, Serious said it had not indicated the closure would be immediate.)

Workers voted yes. As the 5 p.m. shift ended, workers stayed in the plant, calling their loved ones and community supporters to explain that they were occupying ... again.

I arrived at the reoccupied factory around dinnertime Thursday, in time to see three community supporters and Occupy Chicagoans walk through the small crowd of two dozen to the factory door with several boxes of pizza — a recently minted symbol of solidarity in the wake of last year’s Wisconsin capitol occupation that was largely fueled by the stuff — to deliver to the occupying workers.

As they opened the factory door, Chicago Police Department officers posted inside the factory stepped forward to stop them. The crowd wouldn't take no for answer, and began chanting, "Let the workers eat!"

A brief standoff ensued at the factory's entrance, the steam from the pizzas rising in the winter air, news cameras rolling behind them. A middle-aged woman leaned in to an officer and stated flatly, "Sir, you don’t want to be on camera denying workers pizza." Reluctantly, the pies were allowed in.

Fried and workers Armando Robles and Vicente Rangel occasionally came to the door to speak to press and supporters about the progress being made in negotiations with the Serious CEO over the phone.

“We proposed that they give us time to find a buyer,” Fried said, “or even allow the workers to buy this plant and run it as a worker-owned enterprise.”

“We’re just asking for a little time to find a way to save these jobs,” said Rangel.

As word traveled on Twitter and Facebook that the plant was reoccupied, the crowd grew. Members of Occupy Chicago arrived with supplies like food, sleeping bags and tents. Wearing a bright-blue poncho in the freezing winter rain, Andy Manos joked,  “I love that I’m part of a movement that brings their own urban camping equipment.”

Manos, a member of Occupy Chicago’s Labor Outreach Committee and an instructor at DePaul University, said the support for such an occupation was natural, given Occupy’s roots in labor struggles.

“The tactic of occupation is inspired from these kinds of factory occupations,” he stated, referring to the 1930s-era sit-in strikes in places like Flint, Mich.

As the night wore on, the rain picked up, and a crowd of 40 or so hunkered down. Occupiers arrived with sleeping bags, more tents, groceries. Someone arrived with a tray of grilled asparagus and cheesy risotto, leftovers donated to Occupy Chicago after a downtown event. I made myself a plate, considering the irony of dining on such fine cuisine outside of a sit-down strike.

Supporters hung around, making themselves useful when they could. Nick Limbeck, an education graduate student at the University of Chicago, stood under a tent calling through a list of the factory’s mostly Latino workers, encouraging those who had the day off to come to the occupation.

“You’re inside the factory right now?” he said at one point in Spanish, realizing he had called a worker who was already occupying. “Oh, disculpe. Stay strong!”

Fried, Robles and Rangel came out several times, telling supporters that negotiations were starting to wrap up. Around 1 a.m., they emerged to declare victory: The company had agreed to keep the plant open for an additional 90 days.

In 2008, workers occupied for six days before their demands were met; in 2012, the whole process took less than 24 hours.

In 2008, there was talk of the Republic occupation as a harbinger of populist rage to come. A month after big banks were thrown golden life preservers while the rest of the country struggled not to drown, Republic workers created the now-ubiquitous chant "Banks got bailed out -- we got sold out."

The chant captured much of the public's anger at the injustice of bailouts for Wall Street and misery for Main Street, and conditions seemed ripe for unions and other progressive organizations to up the ante. But no such uptick occurred. In fact, puzzlingly, it was the right that seized the moment and the momentum while progressives were left scratching their collective heads.

In 2012, however, the conversation has shifted again. Whether because of the right’s overreach, the rise of Occupy, or both, struggles like the Serious occupation seem to resonate with the general public. Fried says the existence of a large, easily mobilized Occupy movement made their 2012 action different.

“We weren’t surprised at the crowd of Occupy Chicago folks,” Fried says. “Everybody knew that we would have a warm reception.”

That presence made a crucial difference at the moment Fried thought they would all be arrested by the Chicago police who had entered the factory.

“Just when the police were saying, ‘We’re going to arrest you right now,’ we said, ‘Hold on a second, we’re talking to the CEO in California. Oh, and by the way, there’s a crowd outside, and the media are here.’ It slowed police things down enough to allow negotiations to resume and eventually lead us to a fair resolution.”

It’s that kind of Occupier/union synergy that has caught on in a few locales and has been given partial credit for union victories in places like Washington state, as well as pushing the labor movement more generally to take risks leaders are usually uncomfortable with.

In the case of Serious, Fried says Occupy’s participation changed the tone of negotiations with the company’s management in California. “When they heard that Occupy Chicago had moved in outside their company, they were alarmed,” she says.

Robles agrees. “The company didn’t think we could generate that kind of crowd and attention,” he says.

Occupations failed to spread in the immediate aftermath of Republic, a fact lamented by some progressive observers who had hoped the tactic would catch on like it did in the 1930s.  But examples of bold, successful actions by unions are still few and probably unlikely (UE is not a member of the 57 union-member AFL-CIO, and is to the left of almost every other union in the country), but various Occupy chapters have occupied foreclosed homes in recent months in cities like Minneapolis, Atlanta and Brooklyn, N.Y. And just a few days before the Serious occupation, parents briefly occupied a West Side elementary school slated for “turnaround” by Chicago Public Schools that was strongly supported by Occupy Chicago protesters.

Unions may not be willing to push the envelope the way Serious workers were, but the stage appears to be set for Serious-style occupations to spread to other parts of the progressive movement in a way they couldn’t after Republic. Occupations in 2012 have two crucial pieces that 2009 occupations would have lacked: a new political space opened up in the country that sympathizes with the plight of the ever-more-squeezed 99 percent, and the material support that a fluid but organized movement like Occupy can provide.

Wiping the rain from his face while standing in front of the occupied Serious factory Thursday night, Manos, the Occupy Chicago Labor Outreach Committee member, thought the answer to the question of whether occupations would continue to spread was obvious.

“Well, this is the second occupation in a week here in Chicago,” he laughed. “So it seems like a fair bet that more actions like this will be likely.”