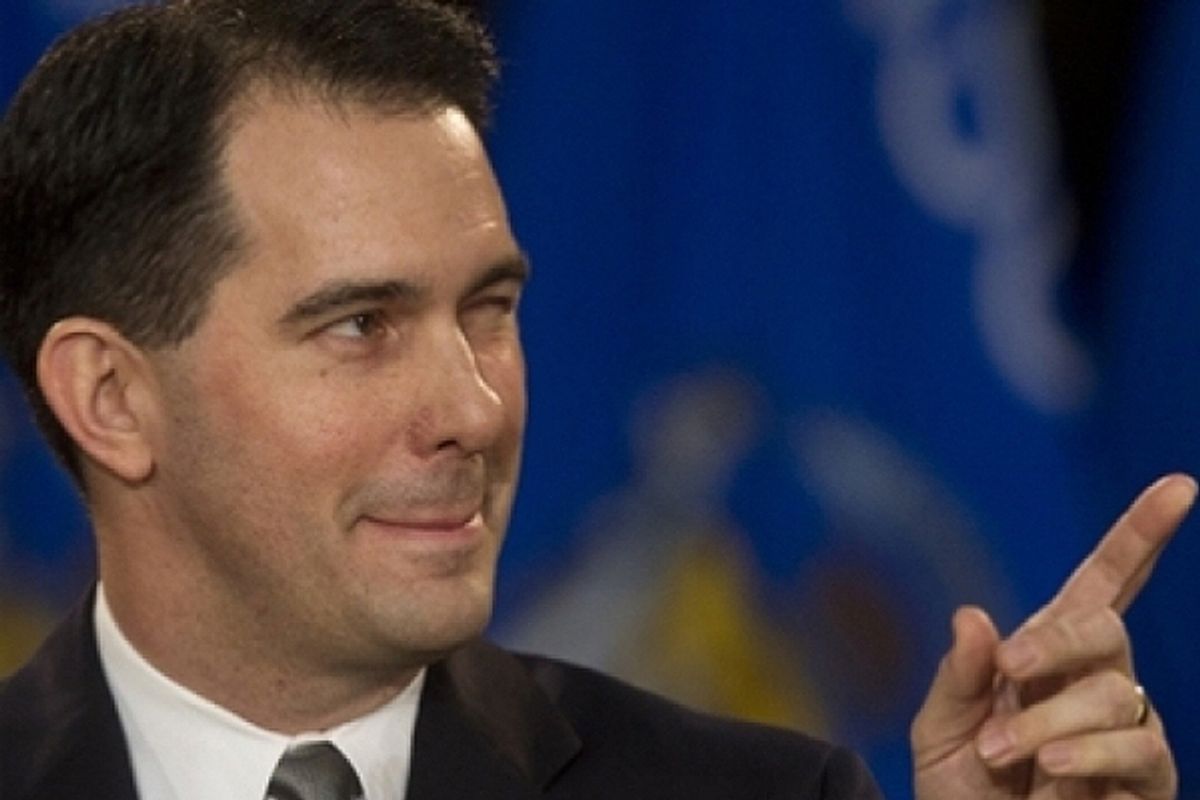 This month David Koch gave away the game. In a rare interview with the Palm Beach Herald, the notorious right-wing financier declared that a defeat of Wisconsin Gov. Scott Walker in his upcoming recall election would spell doom for conservatives’ efforts to hamstring the labor movement. “If the unions win the recall,” Koch told the Herald’s Stacey Singer, “there will be no stopping union power.” As a literal statement, that’s not true at all. But Koch’s rhetoric communicates much more than the feel-good ads his cash is funding.

None of this season’s union-busting governors is more identified with David Koch than Scott Walker. Their connection was cemented by a phone call they didn’t share: In the middle of last winter’s Wisconsin capitol occupation, journalist Ian Murphy posed as Koch in a 20-minute conversation with Walker. Walker compared his anti-union hardball to Ronald Reagan breaking the air traffic controllers’ union and the Soviet Union. He acknowledged he’d considered planting provocateurs in union crowds. The fake Koch promised “once you crush these bastards I’ll fly you out to Cali and really show you a good time.” Walker replied, “That would be outstanding.”

One year later, Walker’s anti-union bill is law, but his career is in question. On Monday, Walker announced he won’t challenge the million-plus signatures submitted to recall him from office. An election date could be set for as soon as May. Days after those signatures were submitted, the 501(c)(3) arm of Americans for Prosperity, the Koch-founded and -funded Tea Partying organization, dropped $700,000 into TV ads defending Walker. But their message sounds more like Barack Obama than David Koch.

Smiling Wisconsinites celebrate signs of economic recovery, and they praise “recent reforms” that have government “doing more with less,” just like “our families.” “We’re headed in the right direction,” says one small-business owner, “and vital programs are being preserved.” “Wisconsin has also avoided the mass layoffs of public workers that we’ve seen in other states,” says a truck driver. That’s possible, according to a small business owner, because “Wisconsin put an end to abuses of collective bargaining.”

Legislative union-busting has made Walker a darling of the national GOP. But these days Walker isn’t bragging about breaking unions, like he did in his fake Koch call. He isn’t pledging to stop union power, like the real Koch is. And neither are the Koch-backed ads defending him. Instead, they’re walking a fine line.

Consider Walker’s Friday interview with the Atlantic’s Molly Ball. While complaining that “national big government unions” have “poured tons of money” into Wisconsin and “ginned up their members” against him, Walker said that “private-sector unions have been our partner in the economic revival we’ve had in this state. A bigger issue is the impact the public-sector unions have had on the taxpayers.” Walker disclaimed any interest in pursuing a “right to work” law barring private sector union contracts from requiring workers to pay for the costs of union representation (years before pushing through such a law in Indiana, Gov. Mitch Daniels also disclaimed any interest in it). Right to work, Walker noted, already applies to the public sector in Wisconsin. Echoing George Bush’s 2004 reelection campaign, Walker tried to pivot from his decisions to his decisiveness. The recall election, he told Ball, will be a referendum on “courage” and whether politicians should take on “tough issues” at all.

There’s a strategy here. Emphasize Walker’s supposed leadership qualities – hopeful, decisive, courageous. Soften the appearance of animus toward organized labor in general. Cleave virtuous private sector workers, including union members, away from supposedly overpaid public sector workers and big-spending “union bosses.” And, as usual, Koch and Walker are on the same page – despite the former’s moment of honesty.

“We’re helping him, as we should,” Koch told the Herald, in an interview intended to highlight his anti-cancer philanthropy. “We’ve gotten pretty good at this over the years. We’ve spent a lot of money in Wisconsin. We’re going to spend more.” The Herald noted that Koch “repeatedly uses the phrase ‘union power’ as though it’s interchangeable with the word ‘Bolshevik’ – a new red scare for a new century.” Koch’s comments triggered complaints filed by the state Democratic Party with the IRS and Wisconsin Government Accountability Board, charging that Koch, in his zeal for Walker, had punctured the legal fiction that Americans for Prosperity's TV spots were “issue ads” and not election campaigning.

(AFP did not respond to a request for comment.)

AFP’s opening ad buy is just the beginning. Nick Passanante, political director for the progressive Democracy for America, says he expects right-wing groups, including the Chamber of Commerce and the Club for Growth, to be active on Walker’s behalf. Passanante notes that the election’s likely timing – late spring or early summer – will enable national organizations on both sides to make it a top priority before shifting gears to the November elections.

As the campaign heats up, expect Walker and his Koch-backed rangers to get more aggressive in trying to separate good private sector union members from so-called union bosses and bloated bureaucrats. The push for Walker’s anti-union bill last year also attempted to slice and dice union members – exempting police and firefighters while targeting other public workers – but sparked a broad-based labor revolt nonetheless. To survive, Walker will again try to divide some union members from others, and from the non-union, non-wealthy majority.

Whereas the degree of populism in last year’s Wisconsin Democratic campaigns was unusual, appeals to class resentments are Republicans’ bread and butter. Whether they’re talking social issues (“elitist judges in San Francisco”) or economics (“government workers making more than the taxpayers who pay their salaries”), Republicans have long reaped success by playing on resentment.

As Koch attests, Walker’s attack on labor has earned him exceptional – and quantifiable -- gratitude from the wealthiest Americans (he raised $4.6 million in the five weeks before the recall signatures were filed). But in a state that’s been losing private sector jobs for six months, Walker’s future – and labor’s -- also depends on the number of non-wealthy Wisconsinites willing to blame public workers for their plight. It’s the decline in unionization that makes such a strategy possible. As a Walker-backing occupational therapist told the New York Times last year, “I don’t get to bargain in my job, either.”

While Walker’s opponents wrestle with how sharp a contrast to draw against him, Walker and the right face their own challenge: How to capitalize on resentment against union members while blunting the sense that, like David Koch, Scott Walker longs to be free of labor once and for all.