An extraordinary testament from Iran's most persecuted filmmaker

The cinema of America's new No. 1 villain testifies to the country's real-life complexities 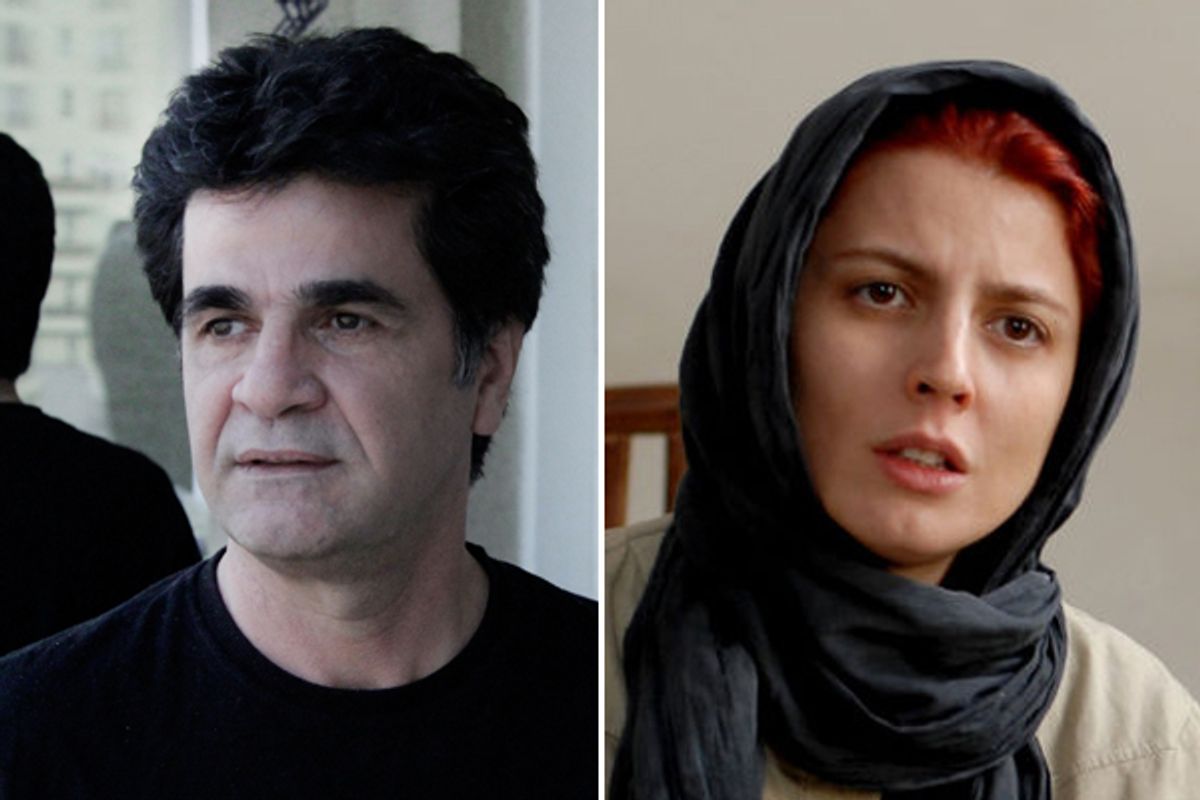 Jafar Panahi in "This Is Not a Film" and Leila Hatami in "A Separation."
--

In the middle of acting out the screenplay of a film he isn't allowed to make, using strips of tape and a cellphone and his living-room carpet as his only props and sets, Iranian director Jafar Panahi grows discouraged. He has the feeling, he tells documentary filmmaker Mojtaba Mirtahmasb (who is holding the camera), that trying to tell a film this way is a lie, a bit of fakery that evades the very thing that makes a film a film. Then again, the work we are watching is called "This Is Not a Film," which refers both to the fact that it has no script, no actors and only one location, and also to the fact that Panahi can't make films, under the terms of a draconian sentence handed down by Iranian judges. (At the end of one conversation, Panahi tells Mirtahmasb, "That's enough. Cut." The latter gently reminds him that he's better off not making directing decisions.)

That clues you in, at least a little, to the deceptive philosophical complexity of this 76-minute video essay, which quite literally begins with silence and ends with fireworks. "This Is Not a Film" at first appears to be a haphazard visual diary of Panahi's daily life, drinking tea, feeding his daughter's iguana and rattling around inside his upscale Tehran high-rise apartment as he waits for the final dispensation of his legal case. Once a well-regarded filmmaker who specialized in low-budget, documentary-style comedies and dramas with nonprofessional actors -- he is best known for his mildly seditious crowd-pleaser "Offside," about a group of girls who try to sneak into an all-male soccer stadium -- Panahi is now an international cause célèbre.

He has been sentenced to a six-year prison sentence and a 20-year ban from the film industry, all for making a movie the Iranian mullahs apparently decided would lend aid and comfort to the opposition. He remains free on appeal at this writing, and the theocratic regime's willingness to enforce such an outrageous sentence against an artist remains in question. But by the time "This Is Not a Film" is over it becomes something quite different, something almost impossible to describe: a co-created documentary about a political prisoner on house arrest (some of it shot on an iPhone), a master class on filmmaking with non-actors, a work of accidental cinema that uses one chance encounter to launch a meditation on the current state of Iran. Any way you slice it, it's a brave and brilliant act of defiance.

"This Is Not a Film" was smuggled out of Iran in time for the Cannes Film Festival last May, and in some sense it reaches America at the perfect moment -- or at least at a critical moment in the troubled recent history of our two countries' relationship. Right-wing hawks in America and Israel are calling for a preemptive strike against Iran's nuclear program, whose existence and potential threat remain little more than a hypothesis. Meanwhile, Asghar Farhadi's film "A Separation," which offers an unstinting portrait of a middle-class Iranian marriage and class, religious and gender conflict in Iran, has won worldwide acclaim and just captured the nation's first Oscar. Both the Tehran regime and Iranian dissidents have tried to claim "A Separation" for their side, with the state-friendly TV network broadcasting a fictitious version of Farhadi's Oscar speech in which he mentions the nuclear dispute (he did not), and opposition figure and former President Mohammad Khatami offering his congratulations. (While Farhadi has wisely avoided political statements during awards season, his sympathies are clear. He never thanks or even mentions the Iranian government, and has frequently praised "Iranian filmmakers," a code phrase often used by Panahi's supporters.)

As the international success of "A Separation" and numerous other Iranian films over the last two or three decades should remind us, even in its current state of high tension Iran is not North Korea. This is a society with an enormously rich artistic and literary tradition, which has remained somewhat autonomous under the ayatollahs, as it did under the Shah. There isn't a single individual or ruling oligarchy that calls all the shots, and the political, religious and bureaucratic classes are all, to a greater or lesser extent, at war among themselves. In fact, I would suggest that "A Separation" offers a more damning indictment of the multiple hypocrisies of Iranian daily life than Panahi's films generally do, but for whatever reason Farhadi has been left alone and Panahi has clearly pissed off the wrong people.

Panahi had already been arrested in 2009, during the protests after that year's disputed presidential election, and then was arrested again in March 2010, partway through making what the Iranian regime apparently decided was an "anti-state" film, which we see a few snippets of acted out in the living room. (His real crime may have been the remarks he made -- and green scarf he wore, a symbol of resistance -- as jury president at the Montreal Film Festival.) Although the attendant global publicity and support from many prominent Iranian and Western filmmakers got him out on bail after three months in custody without charge, he was ultimately convicted of "the intention to commit crimes against the country’s national security and propaganda against the Islamic Republic." It's a cliché to call something Orwellian, but sometimes the shoe fits.

In "This Is Not a Film," we overhear his phone calls with his lawyer and with Rakhshan Bani-Etemad, Iran's leading female filmmaker, neither of whom offers much room for optimism. It's possible that Panahi's sentence will be reduced, but unlikely it will be voided entirely -- and the authorities are no doubt delighted to let him stew in his gilded cage for a good long time. There was obviously considerable risk involved in making "This Is Not a Film" -- which does indeed credit Panahi as co-director, along with Mirtahmasb -- and one imagines the mullahs are not pleased. You get the feeling he simply couldn't help himself, which is the secret of his work, and the thing that got him in so much trouble. After trying and failing to tell the story of his banned screenplay, Panahi talks us through a couple of scenes in previous films (first "The Mirror," from 1997, and then "Crimson Gold," from 2003) to explain how the things that go wrong -- the unpredictable human factor -- dictate the final work.

As if to illustrate this principle in action, after Mirtahmasb departs Panahi takes his camera into the elevator with a talkative young man, a student who moonlights collecting trash in this fancy apartment building, and then finally out into the street, where anti-government protesters are setting off fireworks. The young janitor urges him to turn off the camera, for fear of being recognized, and that's the end of the film that is not a film. "This Is Not a Film" does not make an argument for or against war or Iran's supposed nukes or anything else; as Panahi himself told the court that convicted him, he believes in a "socially conscious, humanistic and artistic" vision of cinema that "tries to stay beyond good and evil." Instead, this non-film is an ambiguous statement from a man persecuted by a society in crisis. In its own way it's an inspiring testament of courage and sacrifice and even patriotism, as hackneyed as all of that may sound. As Panahi told his judges, "Despite all the injustice done to me, I, Jafar Panahi, declare once again that I am an Iranian, I am staying in my country and I like to work in my own country. I love my country, I have paid a price for this love too, and I am willing to pay again if necessary."

"This Is Not a Film" opens this week in New York and Los Angeles. It will open March 23 in Hartford, Conn., and New Orleans; March 25 in Albuquerque, N.M.; March 31 in Columbus, Ohio; April 6 in San Francisco; April 9 in Nashville; April 13 in Chicago, Madison, Wis., and Seattle; April 20 in Boston and Houston; and April 27 in Cleveland, with more cities to be announced.