Inside the ultimate subway graffiti project 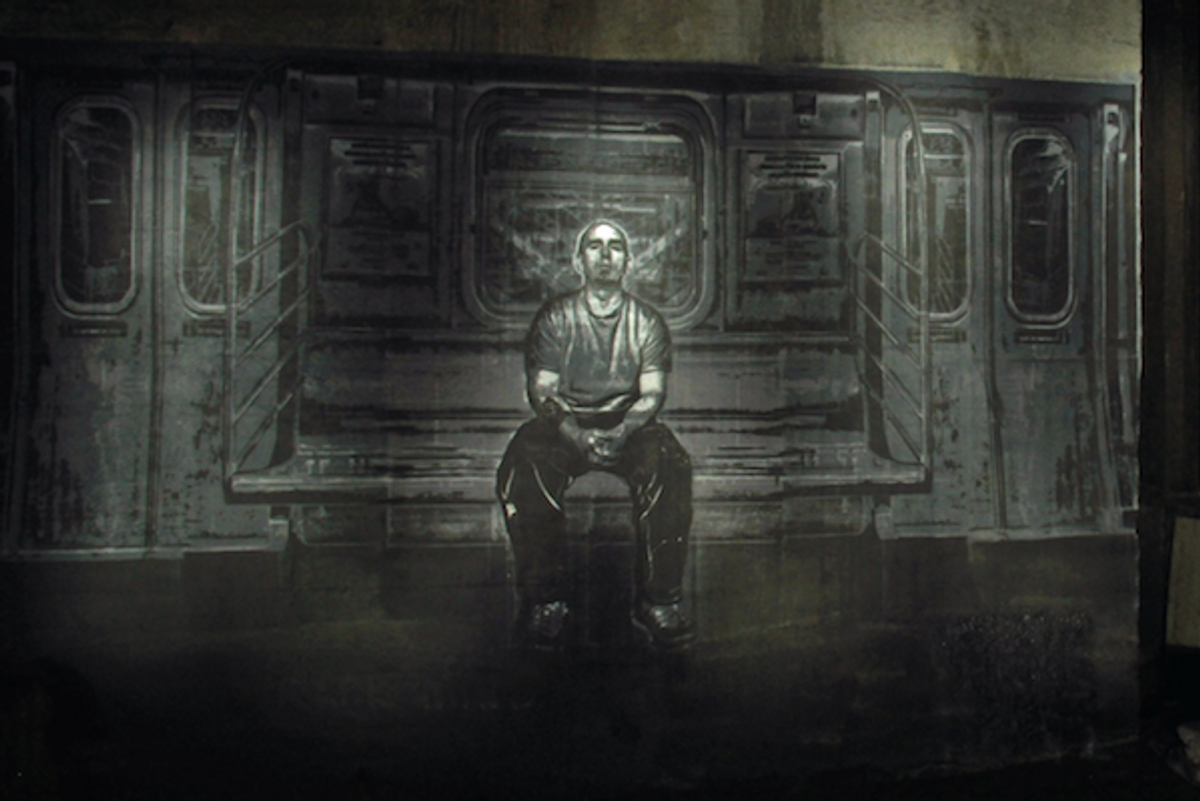 On the copyright page of "We Own the Night: The Art of the Underbelly Project," curators Workhorse and PAC include on their thank you list “all the people who know how to keep a secret and keep their mouths shut!” I’m one of these people, having been shown an early proposal for the book version of this extraordinary undertaking. An agent clued me in; a few days later I was at photographer Martha Cooper’s apartment and asked if she’d caught wind of "Underbelly." She’d heard all about it and was hoping to receive an invitation to the underground gallery. It was summer 2010 and the project was wrapping up. In late October of the same year, the secret was out when the New York Times ran a feature about an art installation that very few people would ever see.

I’m not sure if Cooper ever made it down to the abandoned New York City subway station, but between May 2009 and August 2010 Workhorse and PAC escorted 103 street artists four stories beneath street level and unleashed them in an empty space big enough to fit six subway trains. Jim and Tina Darling, the first artists to get up on the grimy, barren walls, describe it as “an industrial version of an orchard with its rows of concrete and steel beams, stretching on forever and fading into darkness. The air… thick enough to see in our lights.”

PAC first discovered this space in 2005, taken there by a stranger. On subsequent visits, he always left “with an inexplicable sense of calm.” Having been abandoned for 80 years, only a handful of visitors had entered this subterranean cavern, and none of them had been graffiti artists. Legendary old-school graffiti writer HAZE reminds readers that since the early 1970s, train tunnels and ghost stations have been galleries for New York City graffiti. Back in the day, 12-year-old HAZE and his crew ran roughshod through the abandoned 91st station on a now defunct Broadway IRT line. So the fact that PAC had been ushered into an area undiscovered by graffiti artists was auspicious to say the least. After meeting Workhorse through an art gallery connection, the makings of a singular endeavor were in place.

Able to reach out to a stunning array of international graffiti and street art talent, Workhorse and PAC assembled an impressive cast of contributors, many of them able to make livings off their work. This is a result of individual talent, of course, but also a number of cultural circumstances that have come to pass over the past few years, raising graffiti and street art out of the low-culture gutters and into the lofty high-culture strata of museum exhibits, glitzy fashion runways and global advertising campaigns. But as Workhorse points out, this bubble is “starting to burst.”

The roll call of acclaimed artists who participated in this project is staggering. Ranging from graffiti writers like SABER, REVOK, CEAZE, and STASH to street artists like Know Hope, SWOON, Flying Fortress, FAILE, and Ron English, the logistics of organizing so much talent is dizzying. These artists are no strangers to acting covertly and breaking the law, but even by their standards the Underbelly Project possessed an aura of a covert operation akin to some sort of special-ops mission.

The result of everyone’s work is a gallery of contemporary graffiti and street art on par with the recent "Art in the Streets" exhibit at the Museum of Contemporary Art, Los Angeles, or any high-profile gallery group show. But the venues couldn’t be any more different. Workhorse admits that in thinking about this undertaking he and PAC asked themselves “If no one will see it, will it still be important?”

Such a question strikes at the heart of why the street art bubble is beginning to burst. Unlike the original graffiti writers, and even the first wave of street artists like Shepard Fairey, kids running around today with aerosol cans, stencils and wheat paste have it in the back of their minds that they might have a shot at becoming rich and famous. This is a far cry from the get up for the sake of getting up credo that inspired kids in the ‘70s, ‘80s and ‘90s.

If there is anything to criticize about "We Own the Night" it’s that there are too many photographs of the artists. I said as much to the agent when I first saw the proposal and seeing the finished book, which is big and brimming with photographs of the phenomenal artwork, I feel the same. Many of the featured artists have played a role in how the world views this art form, and if you look at their work you can see why.  As Harlan Levey writes in the book’s most insightful piece, no matter where you look on this particular art history timeline, the movement has been spurred by action. But the remnants of these actions, the actual art, have been noticed by surprise – the hilariously appropriate placement of a sticker, the delicate latticework of a stencil sprayed on a sidewalk, the precision of a gravity-defying tag proudly trumpeting from a highway overpass. The how did they do that? awe and mystery matters. Museums usually don’t exhibit photographs of artists next to their work; I don’t see the need to feature photographs of street artists next to their pieces.

In the scheme of how popular culture has embraced graffiti and street art the idea of separating the art from the artists merits a stand-alone essay, but within the context of "We Own the Night" it is a minor, though thought-provoking, critique. On the whole, the book is mesmerizing thanks to Workhorse and PAC’s collective vision, which is as perceptive about the past as it is in looking toward the future, and accepting that a change is in the air. As Levey suggests, “It is the action that connects all of the participants, and as an action, the Underbelly Project seems to appear right before the closing of a chapter.”

Joe Iurato’s striking “The People Upstairs Are CRAZY” shows a boy using a drainpipe like a periscope; the letters in the word “crazy” appear in circles made to look like letters identifying subway lines. It’s a fitting sentiment. It’s clear that the artists who contributed to the Underbelly Project conjured a realm of sanity beneath the streets, a return to the essence of the art form: creating in the moment and not worrying or thinking about what comes of what is left behind.