The GOP leaves Michigan behind for Obama

Romney edges Santorum in his "home state," insuring the race will go on, and on. Plus: my tweet about Mormons 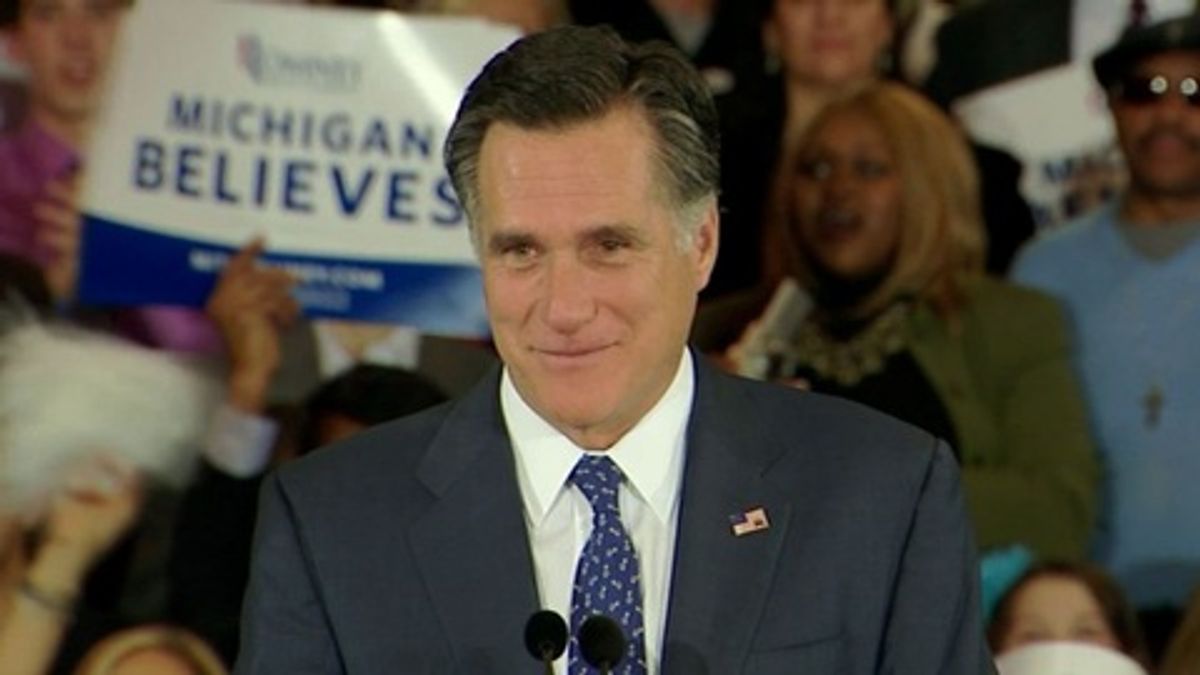 To come from behind to win your home state is embarrassing, but it's better than losing. So Mitt Romney snatched a victory in Michigan -- while winning Arizona as predicted -- and looked relieved to be leaving his "home."

In the end, it's amazing he won Michigan at all. In fact, I'd have advised him to renounce Michigan as his home state. He's got too many home states – he played that card (vacation home anyway) in New Hampshire and will again in Massachusetts. More important, Romney didn't seem as though Michigan was his home state in December 2008, when he wrote a scorching New York Times Op-Ed opposing the Bush and Obama administration plans to keep the big three automakers alive, headlined "Let Detroit Go Bankrupt." Nobody talks like that about their home state.

Imagine, seriously for a moment, if he'd gotten together his Bain Capital colleagues as well as some other wealthy friends – maybe the guys who own NASCAR teams -- to invest in his hometown industry, on his own. Of course, he couldn't. The man President Obama appointed to oversee the auto bailout, Steve Rattner, is no slouch at raising money. But this week Rattner said there was no capital to be found in the economically dark days when the companies were going under – and he challenged Romney and other bailout foes to suggest where they might have rustled up money.

Crickets from Romney and the GOP.

Instead, in one area of the economy in which he had expertise, investing in and turning around (and sometimes shuttering) struggling firms, Romney merely wrote a New York Times Op-Ed. It could have been headlined: "Romney to Detroit: Drop Dead."  Barring a disaster, Obama will carry Michigan in November.

Romney's win can also be read as a fumble by Rick Santorum, who threw away his lead last week when he attacked our first Catholic president, John F. Kennedy, in juvenile and overwrought terms, saying Kennedy's speech on religion made him want to "throw up." The Catholic Santorum actually lost Michigan's Catholic vote to the Mormon Romney, 43-37, but he won the support of Michigan's evangelical Christians. Go figure.

I've said for weeks that I can't root for Santorum (or Newt Gingrich) to win the GOP nomination because I love this country, and I can't pull for an extremist just because I think he'll be easier for the president to beat. There's always a chance that a national crisis could make anxious voters simply vote for change – and pick the Republican in November. But it's started to get a little more tempting to cheer on Santorum this week, as he defeats himself with ever more ridiculous positions like his Kennedy rant, plus calling Obama a "snob" because he wants people to have the chance to go to college.

I'd love to see Obama campaign ads in swing states showing Santorum talking about Kennedy making him want to "throw up." The Democrat would win the Catholic vote overwhelmingly (he won it in 2008 but not by much). And imagine the ads featuring first-generation college grads talking about their families' pride in their achievement. Santorum is a sure loser in November, and he may well fade in Ohio over the next week just as he petered out in Michigan.

We'll still have to pay attention to Super Tuesday. Ohio remains important, and Newt Gingrich will have a chance for one last moment in the sun in his native South; of course, a big loss there might finally push him off the stage. Romney limps out of Michigan, and he sounded chastened telling supporters at his victory event to go to his website and support him any way they could. The rich man reportedly needs money, and it will be interesting to see how his party responds to the call.

In other news, I live-tweeted the primary results, and in the course of my dozens of tweets I made a Mormon joke. After Romney pompously talked about "saving the soul of America" – typical of the histrionic rhetoric the GOP contenders use about defeating President Obama – I said, "Romney's saving the soul of America – so he doesn't have to baptize us after we're dead." Of course, the Mormon church is under fire for baptizing dead non-Mormons, including Anne Frank and hundreds of thousands of Holocaust victims, and more recently, Daniel Pearl. Predictably, Andrew Breitbart's minions pounced on the tweet and I was swarmed by right-wingers accusing me of religious bigotry (several of them using the C-word, and I don't mean Catholic). It was an interesting turn in a week when I've been attacking Santorum for his ridiculous distortions of Kennedy's religious freedom remarks.

I was honestly torn about how to reply. On the one hand, Elie Wiesel has asked Romney to ask his church to stop baptizing Jews. Daniel Pearl's family was disturbed, especially since the journalist professed his Jewish identity before he died (and likely died for it). Romney himself took part in baptizing dead non-Mormons, he admitted in a 2007 interview with Newsweek, telling the magazine awkwardly when asked about the practice, "I have in my life, but I haven’t recently."  I think his views on his church baptizing the dead of other faiths, when leaders of those faiths and even the families of the dead object, is a legitimate topic for political inquiry.

On the other hand, I wasn't making a political inquiry, I was making a joke on Twitter. And I'm not a comedian, I'm a political writer. (For a comedian's take, try Stephen Colbert's, via Lawrence O'Donnell, here.) Given that I believe religion and politics should be kept as separate as possible, and given that Romney isn't endorsing baptizing dead non-Mormons out on the campaign trail, my joke was a cheap shot. I apologized on Twitter, and I apologize here.