We\'ll accept presidential candidates who have cheated on their wives or smoked marijuana. But a funky \'do? No way 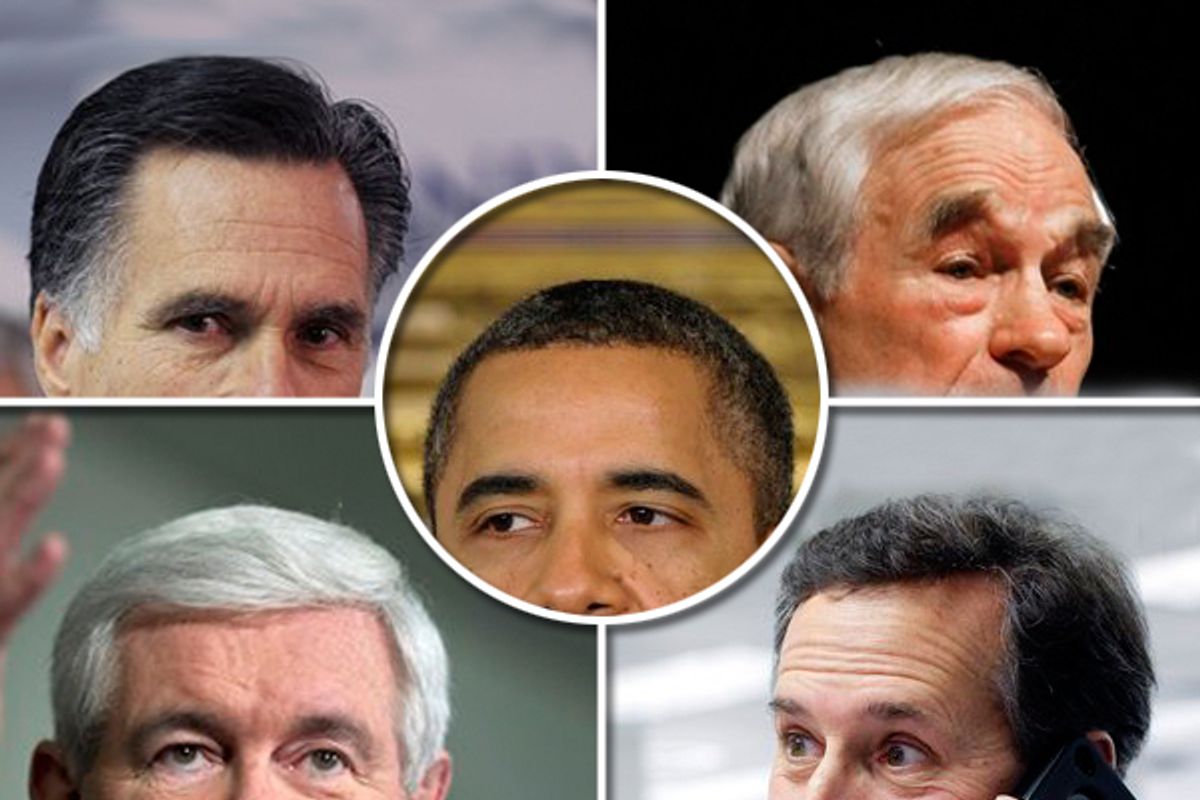 “I look down to see the people that are governing me and making my rules — and they haven't got any hair on their head. I get very uptight about it.” —Bob Dylan, 1963

The phrase "presidential hair" has probably never been used more than in the run-up to the 2012 presidential election, where in the Republican primaries, Mitt Romney and his rivals, vanquished or still in the race, are bristling with intent. The phrase refers to a (presumably male) haircut that looks as though it’s been pasted onto the candidate’s head and groomed extensively. It’s clippered and blowdried — buzzin’ and behavin’.

Serious commentators are right to balk at the notion of judging candidates by their appearance. It diverts attention from the candidate’s ideas and policies, the stuff that actually matters. But hair is sometimes more than a matter of dumb fashion, as the sociologist Anthony Synnott writes: “The debate over hair symbolism is both ancient and complex, and applies not only to gender but also to politics.”

So now that it’s one of the criteria for selecting a candidate to run for president of the United States, it’s time we discussed hair, and the lack of it on our politicians’ heads.

There are plenty of minorities still woefully under-represented in politics, but none more so than men who choose to wear their hair long or funky. The fact that men with follicular abundance don’t have anyone to represent them in government, or even reading the news on TV, is hardly a civil rights issue. But like gay men often have before them, intelligent men who wish to wear a long or funky hairstyle sometimes have to sacrifice an important part of their identity to be taken seriously in establishment circles.

Hair style and dress sense are the only issues where politicians present a narrower range of options for voters than policies. Their political conservatism is reflected, and possibly shaped by, their follicular safeness. If you like, you can research this yourself. But you will find, after inspecting candidates’ heads at the local, state and federal level, there are very few afros, perms, ducktails, beehives, streaks, mop-tops, hi-top fades, curtains, asymmetrical fringes, Mohicans, pony-tails, dreadlocks, cornrows, Jheri curls, devilocks, liberty spikes, rat tails, bowl-cuts, under-cuts or mullets.

If you are one of the thousands or millions of men with one of these things on your head, voting can be a lonely and frustrating process.

Today’s politicians don’t actually have a thing against long hair per se, since a lot of them are deserters from the long-haired community. Look at old pictures of Barack Obama with an afro, Bill Clinton’s shaggy mop and Tony Blair in his Mick Jagger phase. But they visited the barber before they ran for office because politics is an annex of the banking, legal, military and other notoriously short-haired professions.

The political establishment and its associated industries simply use a candidate’s appearance as a means of weeding out people who don’t act in their interests. So we end up with phrases like "presidential hair," which means, on a more subtextual level, that the man underneath it won’t be out of place pressing flesh at a Wall Street dinner or engaging in bonhomie with military personnel. In short, these industries want to make sure the candidate is one of their guys, and in their antiquated world of alpha masculinity, something approaching a buzz cut is essential. Considering their election campaigns — especially the fundraising part — are essentially a series of job interviews with a panel of generals, bankers and super-rich lawyers, it’s not surprising that candidates scissor themselves as soon as their name gets near a ballot paper.

Of course, upper-class American hair culture is based on a misconception: that long hair is an indicator of liberalism, radicalism and bad personal hygiene, mostly because of its association with various subcultures like the hippies and punks. And that’s the reason you don’t see many GOP candidates with brightly colored wood-glued Mohicans. Those guys are the enemy — unpatriotic, anarchists, socialists. But even the supposed liberals and radicals in politics play it safe, probably because they’re scared of being called out as a stoned slacker by Bill O’Reilly. So if you line the likes of Dennis Kucinich and (to a slightly lesser extent) Bernie Sanders up against the far-right conservatives, it looks like they all went to the same barber.

This saddens me. But long-haired liberals aren’t the only ones who should be interested in fighting against the homogeneity of mainstream hair culture, because it’s also possible to be a misguided right-wing zealot with any hair style whatsoever. Ask Johnny Ramone, a lifelong conservative who thanked George W. Bush for his presidency when he was inducted into the Rock & Roll Hall of Fame. Just as his politics never mellowed, neither did his hair. And to think that it wasn’t his ludicrous perspective on the world that kept Johnny Ramone from being a presidential contender, but his leather jacket and heroin mullet — Republicans today, who have to choose between Romney and a bunch of identical crackpots in suits, must be furious. Forget Ron Paul — Johnny Ramone would have been the real anti-Washington candidate.

One annoyance for long-hairs is that when we do see a variation from the comb over or baldness on a politician nowadays — and it’s only ever a slight variation — it tends to indicate that the guy wearing it has done something seriously unethical while in office. The guy with the most flamboyant bouffant seen in some time, former Illinois governor Rod Blagojevich, is serving 14 years in jail for corruption. In my native U.K., the politicians with the longest hair, London mayor Boris Johnson and Mike Hancock (a member of Parliament), are both serial adulterers. But the few slightly long-haired politicians out there are no less trustworthy than your average hair-off-the-collar public official, who will, on average, embezzle and screw around just as much as Blagojevich, Hancock and Johnson. The combined hair lengths of regular trimmers like Richard Nixon, Strom Thurmond and Newt Gingrich — embezzlers, love rats and hypocrites of an epic scale — is enough to dismiss the argument that only long hair indicates an unsuitability for serving one’s country.

The idea that voters won’t go for a long-haired candidate is untested and in all likelihood false. The electorate certainly wouldn’t disapprove of a long-haired legislature any more than it does of the current bunch of knuckle-heads. It would be almost impossible, unless we came up with a way of calculating negative approval ratings. Public support for Congress couldn’t get much lower, even if Rasputin was installed as speaker of the House. As Mike Huckabee puts it: Congress is polling “just barely above a pedophile.”

Since 2008, a key source of disapproval has become politicians’ links to big business and their support for foreign wars. Even Newt Gingrich has jumped on the anti-Wall Street bandwagon to attack Mitt Romney’s past as a vulture capitalist. Politicians on both sides of the aisle are throwing themselves away from Wall Street (publicly at least) like it’s an exploding bomb. Yet, one of the reasons people don’t believe guys like Mitt Romney, Newt Gingrich or Barack Obama when they say they’re not stooges for Wall Street or the military industrial complex (besides the fact that we all know they are) is because they look so at home there. Their thousand-dollar suits and bi-weekly visits to the barber mean voters don’t have to have such wild imaginations to envisage any of the contenders for president buddying up with Stanley McChrystal and Lloyd Blankfein in an after-hours poker game — gambling away the country’s economy in unnecessary military spending, corporate tax breaks and bank bailouts.

If political candidates — Democrat or Republican — want to distance themselves from these industries, they could start by ditching the uniform. Turning up to a fundraiser with a Roddy Piper-style perma-mullet would erase the conundrum of having to take all that Wall Street cash, since there won’t be as much of it on offer.