Mitt flip-flops on everything else but there's one thing he does believe in: That he deserves to be president 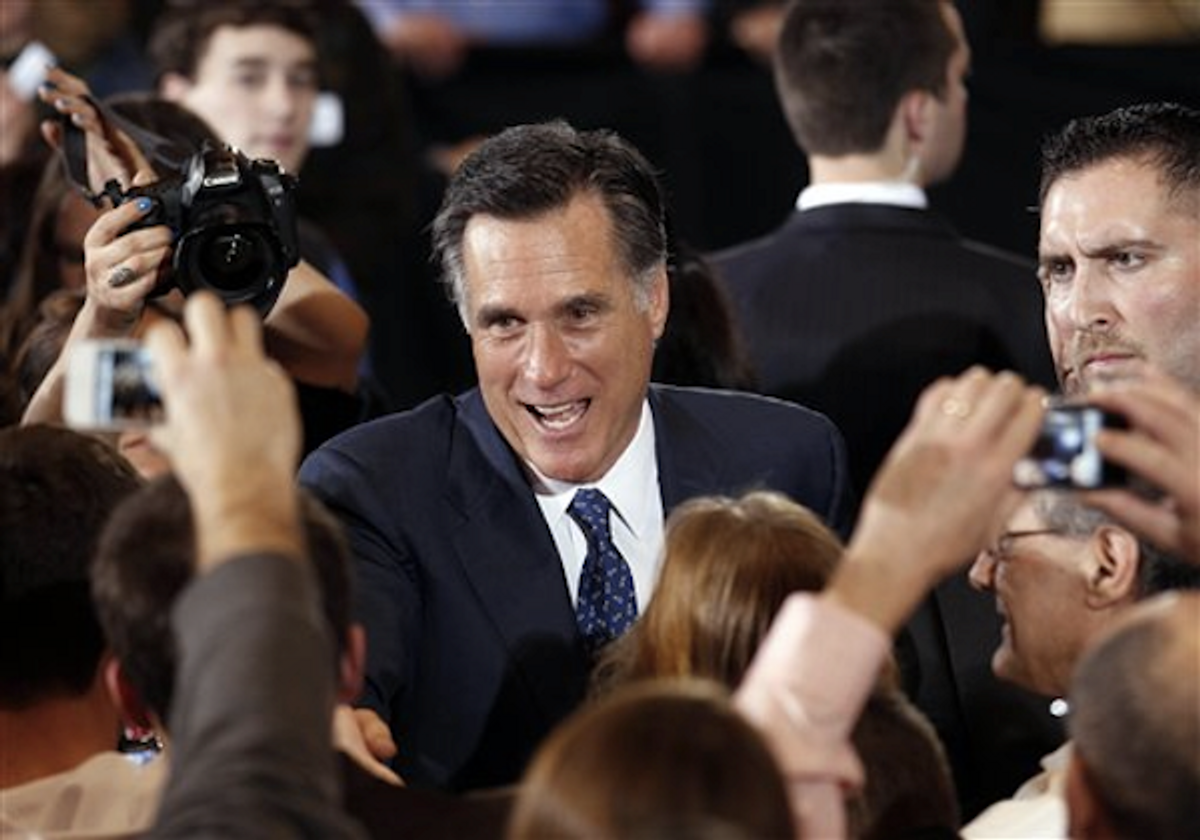 If he weren’t so smug, it would almost be possible to feel sorry for Mitt Romney. Beyond the flip-flopping, has any worse actor ever attempted the role of presidential candidate? It’s beyond Romney’s powers to persuade most people of his sincerity about things he does believe, much less the many tenets of contemporary GOP faith he probably doesn’t share — assuming for the sake of argument that anybody, including himself, knows which is which.

There’s little doubt, however, that Romney believes he deserves to be president, in rather the way the fictional Lord Grantham deserves to preside over Downton Abbey. It’s his inability to conceal that sense of entitlement that makes him such an awkward politician.

The candidate’s cringe-inducing attempts to present himself as a Regular Joe almost invariably end in boasting. Campaigning in his native Michigan, he assured voters that his wife drives not just one $50,000 Cadillac, but two — one at their Boston home, the other at their seafront mansion near La Jolla, Calif., as aides subsequently clarified. No word how Mrs. Romney gets around at their New Hampshire lakeside compound or their Park City, Utah, ski palace.

Visiting the Daytona 500, Romney admitted he’s not a keen NASCAR fan, but does have friends who own racing teams. Defending himself on CNN from the perception that his wealth leaves him “out of touch,” he allowed as how, "If people think that there is something wrong with being successful in America, then they better vote for the other guy, because I've been extraordinarily successful and I want to use that success and that know-how to help the American people.”

On the "Today" show, Romney explained that people concerned with income inequality are simply jealous. “You know, I think it’s about envy," he said. “I think it’s about class warfare. When you have a president encouraging the idea of dividing America based on the 99 percent versus 1 percent—and those people who have been most successful will be in the 1 percent — you have opened up a whole new wave of approach in this country, which is entirely inconsistent with the concept of one nation under God.”

Got that, peasants? God’s behind the 13.9 percent tax rate Romney paid on $43 million he earned in 2010 while technically unemployed. Anybody who thinks differently is merely eaten up with resentment. In my experience, the more money people inherit, the more they’re tempted to lecture others about talent and hard work. And to cry the blues about the indignity of paying taxes.

Romney’s air of personal superiority appears to be the one topic about which the poor dork is absolutely sincere. That’s what makes him such a terrible liar. He’s almost frantic with it, like a golden retriever with his ball. Even with the mute button on the TV pressed, you can almost hear him panting.

Look — modest, humble people don’t run for president. President Obama often appears to have trouble restraining his bemusement at the antics of less intelligent people. Nevertheless, Romney’s unrestrained egotism is the reason I think Paul Krugman (among others) has made far too much of an offhand remark the candidate made seemingly renouncing the central tenet of GOP economic dogma.

“If you just cut, if all you’re thinking about doing is cutting [government] spending,” Romney told a group of Michigan voters, “as you cut spending you’ll slow down the economy.”

To Krugman, Romney’s slip of the tongue revealed him as a “closet Keynesian” who “believes that cutting government spending hurts growth, other things equal.” The columnist added that, after all, “Mr. Romney is not a stupid man. And while his grasp of world affairs does sometimes seem shaky, he has to be aware of the havoc austerity policies are wreaking in Greece, Ireland and elsewhere.”

Oh no he doesn’t.

Or, to be more precise, Romney can be perfectly aware and blithely unconcerned. Krugman left off the next sentence where Romney stipulated that cutting spending alone wasn’t enough. “You have to, at the same time, create pro-growth tax policies.”

Translation: even lower taxes for multimillionaires.

But I’d never presume to argue economics with professor Krugman. My point is that Romney’s tycoon capitalism has only partly to do with jobs, money and the real economy. It’s also about cultural revanchism, putting the right people back firmly in charge and the lower orders back in their place.

Tycoon capitalists like Romney see a prolonged slump as an opportunity to render the workforce more docile and grateful. Remember, this is the same guy who opposed government loans to save Chrysler and General Motors. Better to crush the Auto Workers Union. Who said the best way to resolve the national foreclosure crisis would be to speed it up, so that “investors” could buy people’s houses cheaply and rent them out.