The hypocrisy of Wall Street "capitalism"

Chase's CEO sneers about the success of banks vs. media groups, but which industry actually practices capitalism? 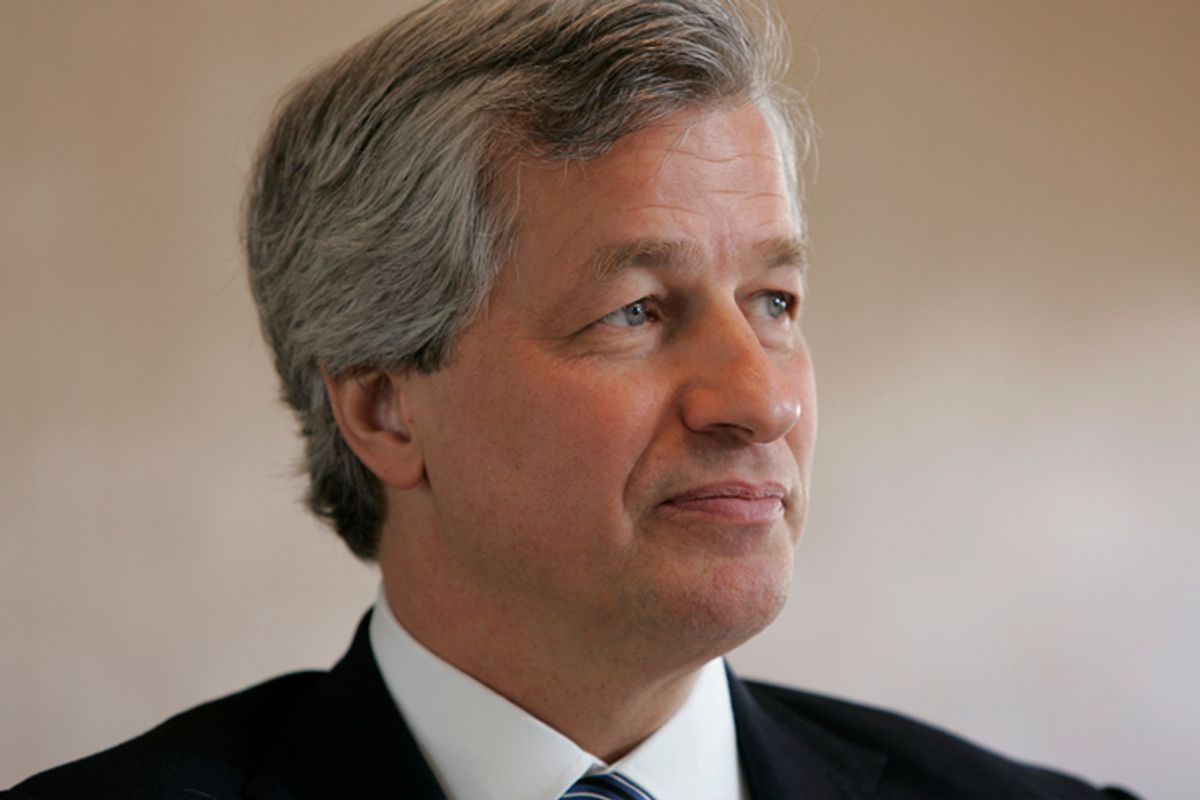 The phrase “Wall Street” is evocative in American culture. For generations, it has referred to the showcase of American capitalism: our financial services system that ensured the efficient use of funds by channeling capital to its most productive use. Indeed, the governing ethos in America is that Wall Street is the heart and soul of our capitalist economy.

As I have written before, capitalism involves four basic principles: absolute responsibility for anything and everything that happens to your company (i.e. total accountability), equal justice under the law, compensation based on the real value created for society, and competition, which involves failure and what is often called creative destruction.

The CEO of JPMorgan Chase, Jamie Dimon, has repeatedly touted the success of his efforts and disparaged critics. Earlier this week he compared compensation in the banking industry to the struggling media world, suggesting that the banking industry was far more successful. In speaking to journalists, according to Bloomberg, he noted, “Worse than that, you don’t even make any money… [while] we make a lot of money.”

Mr. Dimon is right. He and his colleagues are successful. But the real question is this: What are they successful at? By almost any criteria, the banks operate under rules that are so far from capitalism as to be unrecognizable. Let’s take Mr. Dimon’s comparison of the media industry and the banking industry further.

Both industries have been affected by unforeseen events. The Internet has undermined the viability of innumerable media businesses, leading to bankruptcies, changing business models and intense competition for advertiser and subscriber dollars. In the face of these changes, industry participants have been forced to adapt or die. The forces of creative destruction, which are central to capitalism, have operated with an unforgiving ferocity. Formerly dominant entities have been forced to declare bankruptcy, while new media competitors and business models emerge on a seemingly daily basis.

In contrast, the banks argued that TARP was warranted because the economic tsunami of 2008 was unforeseeable. One of the essential functions of a financial institution is to manage risk. The majority of our large institutions failed entirely in this central responsibility as the economic crisis struck. In effect, many of our leading financial services firms were (and often continue to be) led by such poor businesspeople that if the principles of capitalism were enforced they would be out of business. My friends who are media entrepreneurs in Silicon Valley actually laugh when they hear the “we should not be responsible because this was not foreseeable” claims from the bankers. Every entrepreneur knows that they must make payroll each week or they are bankrupt.

At the same time, no one in Washington seriously believes the too big to fail legislation in Dodd-Frank will ever work. Inevitably, as in the case of AIG, counter-parties will declare that they will suffer irreparable harm if one of our leading banks is allowed to fail. I have come to call this “the Washington wink.” You ask a federal official if too big to fail legislation will work, they dutifully say of course it will. However, the “of course” is inevitably accompanied by a knowing wink.

In another divergence, the government has not subsidized media businesses. The banks may be showing profits, but they are on government life support. These so-called zombie banks can borrow from the Federal Reserve at almost no cost, and a long list of government initiatives have served as additional “stealth” bailoutsof the banks. In the absence of this government support, would the banking industry still be successful? If media companies could borrow funds at almost no costs, I suspect their balance sheets and profits would be dramatically enhanced.

Capitalism is built on the idea that compensation and profits reflect the relative contribution an individual or firm makes to the total wealth of a society. Real societal wealth is anything that can be consumed or experienced. Profits are an accounting proxy meant to measure wealth. As I have written before, this proxy has failed miserably with regard to the banking industry. Given the loss of real societal wealth that accompanied the economic crisis as a result of poor bank management, the employment crisis, and the ongoing support the industry needs from the government, there is only one possible conclusion: at this moment the financial services industry is far more of a destroyer of real wealth than a wealth creator.

Meanwhile, media companies don’t profit by repeatedly breaking the law. The lack of enforcement against Wall Street undermines our democracy and capitalism, and is effectively another form of stealth government support for the industry. As noted here, JP Morgan Chase (like several of the large banks) is in the middle of a host of potential scandals. In a true capitalist economy, the government would enforce the law to prevent repetitive malfeasance. The executives leading a firm that repeatedly violated the law would be held accountable by the firm’s board for failure to exercise this basic responsibility to society.

Since the start of the economic crisis, the financial services industry has grown even more concentrated. It’s hard not to regard our largest financial services institutions as effective monopolies. Yet, to my knowledge, no investigation of antitrust issues related to the industry is underway. This is yet another stealth government subsidy. By contrast, in an earlier article I wrote about the misguided Justice Department investigation of e-book pricing, another area that is already suffering badly.

Yes, Mr. Dimon, you are a success. However, I would suggest that the success you so proudly proclaim reflects the loss of two of our nation’s most important values. The first is the failure of individuals and leaders to simply take responsibility for their actions and the actions of their companies. The second is that Wall Street, which should be the heart of American capitalism, has instead become the heart of a dysfunctional system that is destroying the nation’s wealth.

No, bankers are not capitalists. At every turn, they demonstrate that the last thing they want is the return of real capitalism to America.