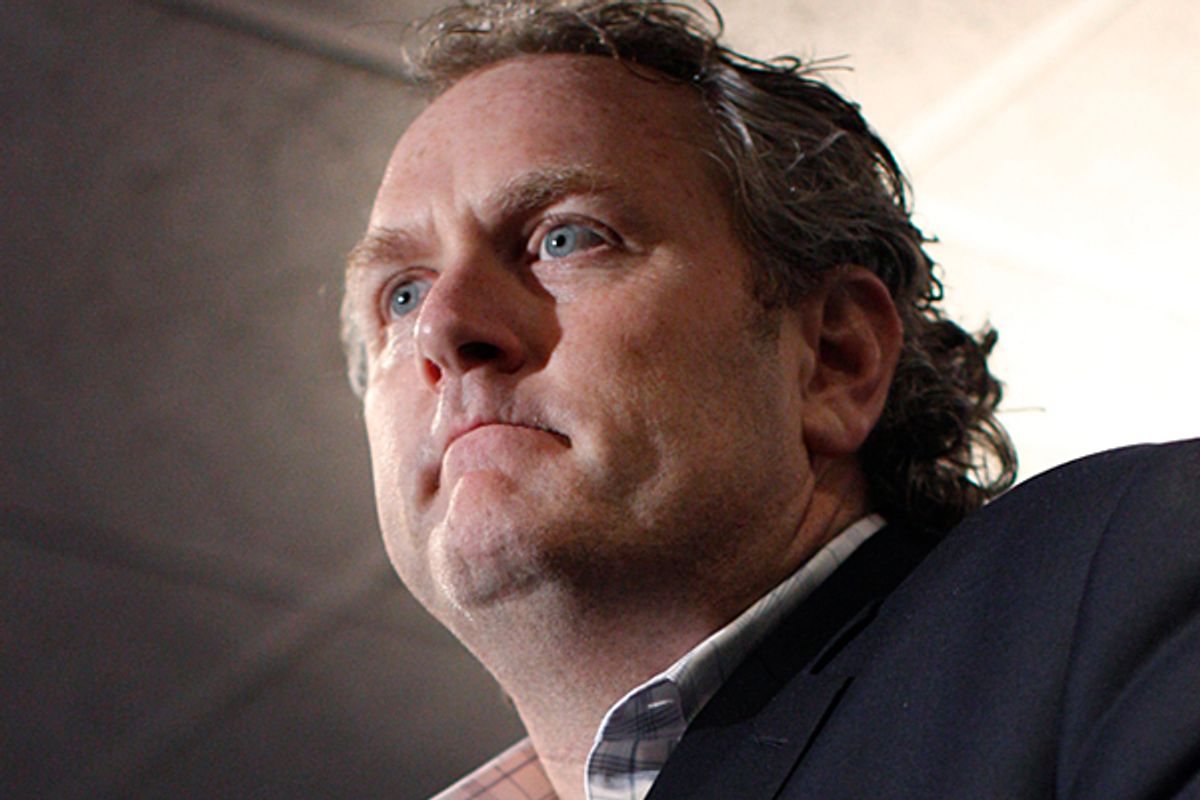 Andrew Breitbart, Web entrepreneur and conservative propagandist, died last night, apparently of natural causes, in Los Angeles. His death was unexpected, and the response to its announcement this morning was an odd and probably appropriate mixture of shock and suspicion. He was hugely influential in the creation and evolution of the political Internet, though he was only a national celebrity in his own right for a couple years.

Breitbart was a nice upper-middle-class kid from Brentwood, raised by a Jewish diner-owner and banker, who attended good private schools. According to Chris Beam’s profile, in Breitbart’s very first piece of published writing, for the high school paper, he invented a quote. (A quote making fun of the way a new student from South Korea talked, to boot.)

He went on to Tulane for college, where he seems to have enjoyed himself quite a bit, as most young people in New Orleans do, though in the autobiographical narrative he later invented for himself, his time at Tulane was really spent narrowly avoiding indoctrination into the nihilistic Marxism of the academy.

But Breitbart wasn’t particularly political as a young man. He lived for comedy and show business, and when he went back to L.A. he worked for a while at making it in the studio system. It didn’t pan out.

But his obsession with celebrity clearly drove him, and his young efforts at breaking into entertainment informed his showbiz-centric political philosophy. His book “Righteous Indignation” devoted more space to recounting two appearances on “Real Time With Bill Maher” than it did to anything resembling conservative policy — this was a cultural crusade for Breitbart — and he had a former studio gofer’s obsession with making celebrity connections. Dwight Schultz from “The A-Team” wrote him a nice note. The acknowledgments to his book thanked Victoria Jackson, Dennis Miller and Jon Voight. He was star-struck upon meeting his future father-in-law, actor Orson Bean: “This guy had appeared on the Tonight Show couch seventhmost of any guest. His opinion mattered to me.” (Bean, a longtime conservative, also introduced Breitbart to that Hollywood brand of pseudo-underground conservative that enjoys pretending it's a sort of secret society in an industry ostensibly run by a cabal-like liberals.) “Hollywood is more important than Washington,” he wrote, explaining his spectacle-driven method of doing political journalism.

Breitbart claimed to have been radicalized by the Clarence Thomas affair, but it was really his favorite radio station KROQ’s transition from late-1980s-style post-punk (Breitbart adored The The and Echo and the Bunnymen) to early-1990s grunge that drove Breitbart to Rush Limbaugh, and conservatism. Then he discovered Matt Drudge’s gossipy online newsletter, and he became Drudge’s first and most influential employee. As Drudge’s newsletter grew into the famous Drudge Report site, Breitbart was Drudge’s ghost, taking “the afternoon shift” for the reclusive right-wing weirdo. Control of Drudge’s front page was and is a tremendous amount of power on the Internet, and Breitbart became friendly with nearly every blogger in L.A.’s small, communal early blog scene. And everyone liked him, because he was funny, and manic, and gregarious.

Through Drudge Breitbart met Arianna Huffington, for whom he began doing “research” work. (Breitbart’s account of working for Huffington is the most intentionally amusing portion of “Righteous Indignation.”) Then he and Huffington and Ken Lerer launched the Huffington Post. Breitbart’s involvement with the site was brief, but it’s an interesting resume item for a hard-charging crusader against Hollywood liberalism.

His most brilliant business move was to found Breitbart.com, a repository for wire stories set up essentially to receive links to breaking news from the Drudge Report, and the income from Breitbart.com and Breitbart.tv made him fairly wealthy. That income stream helped him found the sites that would define the last and most contentious portion of his online career.

“My wife married an almost inappropriately always-lighthearted guy fourteen years ago,” Breitbart wrote in “Righteous Indignation.” “Now she wakes up next to a firebrand who is one of the most polarizing figures in the country.” He has a number of friends from those early blog days who were dismayed at the turn his career and life took, but it was sort of inevitable — the conservative movement grooms its superstars into full-time foot soldiers, and the fight is as much a lifestyle as a job. His finishing school was the right-wing Claremont Institute, where he learned about the intellectual forefathers of the movement he semi-accidentally fell into and found an excuse to get into fun arguments at parties full of the coastal liberals he nearly always hung out with.

So then came Big Government and Big Journalism and the other “bigs”: ridiculous, ugly websites full of misinformation and disingenuous argument and atrocious writing. He began scalp-hunting — he was trained in this line of work back in the 1990s, doing work for the then-right-wing Huffington — taking under his wing a dangerous little liar named James O’Keefe, who performed entertaining stunts with hidden cameras and edited the results into dramatic exposes that invariably fell apart upon closer inspection. (Thankfully, Fox and the New York Post rarely performed that closer inspection.) In the age of Obama, the fights got grossly racially tinged, with Breitbart desperately searching for evidence of widespread anti-white black racism, or evidence of blacks in general gaming the political system for their benefit at the expense of hardworking, rule-abiding whites.

He became the slightly unlikely (as a hard-partying Hollywood media gadfly) self-appointed spokesman of the Tea Parties, defending the movement from all charges of racial resentment-based motivation, making always entertaining if frequently delirious and baffling television appearances, saying outrageous and often indefensibly inflammatory things for attention, and tweeting constantly. The shtick got old, and so many of his predictions of earth-shattering liberal conspiracy-exposing scoops fell flat. He ruined a number of people’s lives for no real reason, and he was generally a toxic influence on the national debate.

It wasn’t actually about “politics” for Breitbart, really. He didn’t care what the top marginal tax rate was. He didn’t see any sort of contradiction in supporting gay rights and drug legalization while working for the election of Republicans. It was about fighting and bomb-throwing and arguing and winning a war against an enemy he built up in his Hollywood-inspired imagination to be massive and powerful. Because that enemy was in his imagination duplicitous and evil, he could justify all sorts of awful behavior on his own part.

He was by all accounts a loving father and husband, and he leaves behind four children.