Is the GOP finally giving in? 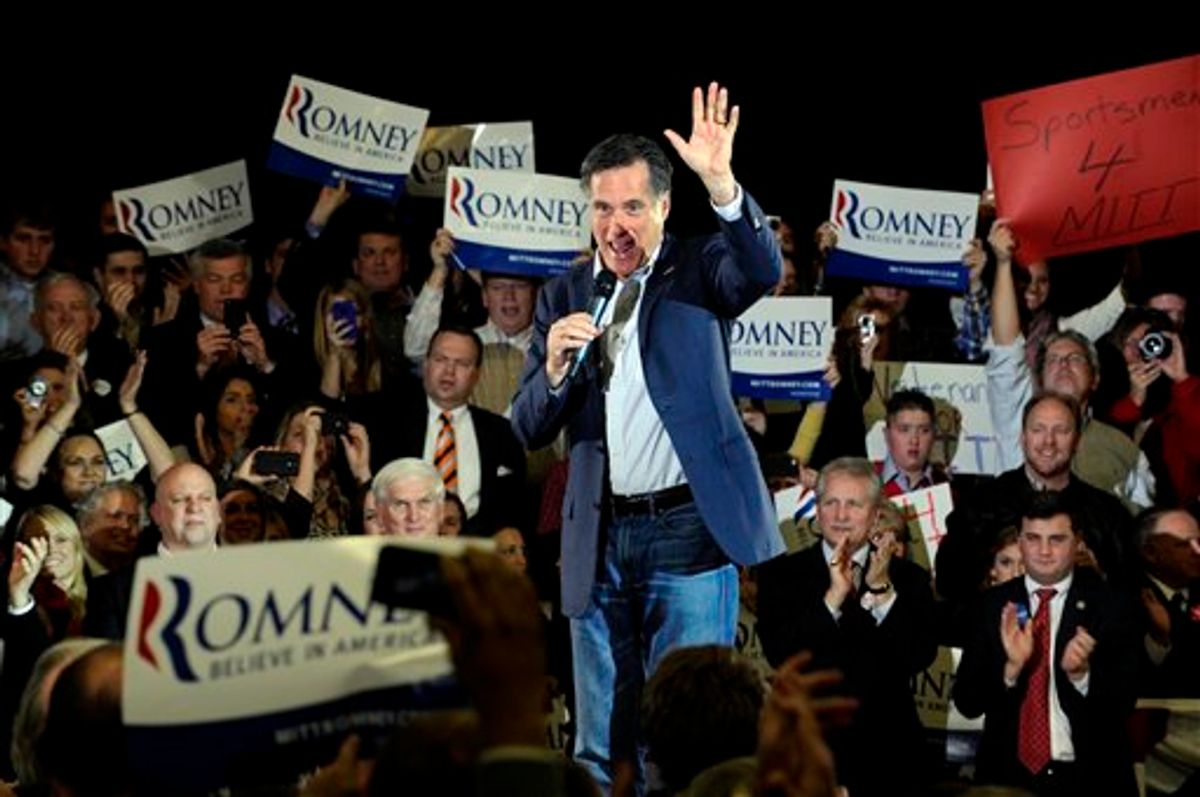 There was good reason to doubt that Mitt Romney’s narrow victory in Michigan last Tuesday would significantly alter the trajectory of the GOP race and speed up his path to the nomination.

Romney’s 3-point margin hardly seemed impressive, especially in light of his native son status, and the reluctance of the conservative base to climb aboard his bandwagon figured to haunt him in the next batch of contests. And when he caused an uproar on Wednesday by contradicting the GOP line on contraception (before quickly clarifying his remarks), it seemed as if Romney was practically begging the right to keep saying no to him.

But with Super Tuesday now just a day away, it’s become clear that Romney has received a genuine boost from the Michigan outcome. A week ago at this time, he and Rick Santorum were essentially tied in Gallup’s national survey, but now Romney has pulled 16 points ahead, 38 to 22 percent. He also posted a solid victory over the weekend in Washington state’s caucuses, has erased Santorum’s lead in Ohio, and even moved into contention in Tennessee, an evangelical-dominated state that was supposed to be off-limits to him.

Moreover, Romney snagged a pair of endorsements on Sunday from prominent Republicans with deep ties to the Tea Party movement, House Majority Leader Eric Cantor and Sen. Tom Coburn. If winning Michigan in a squeaker helped Romney achieve all of this, then who knows what a big night this Tuesday – something that is now very possible – might do for him, and for the timetable of the GOP race?

In a sense, Romney benefited from his own self-inflicted wounds. About five days before the Michigan vote, he looked poised to blow past Santorum in the polls and prevail by a substantial margin. But his widely ridiculed speech to a 98 percent empty football stadium and his tone deaf statements about his wife’s multiple Cadillacs and his NASCAR team owner friends reinforced some of the worst impressions of Romney and seemed to give pause to his softest supporters in the state.

By the time voting began last Tuesday, Romney’s lead had vanished, Santorum seemed to have all the momentum in the world,  and the possibility that Romney would lose and usher in a period of unprecedented nominating season chaos loomed large. After this dramatic buildup, Romney’s 3-point victory came to feel emphatic, and news coverage tended to portray the verdict as an affirmation of Romney’s inevitability – not an indictment of his feebleness. Consequently, his poll numbers rose nationally and in the Super Tuesday states.

The Romney campaign also helped itself, though, by not repeating the mistake it made after its last breakthrough triumph. Recall that Romney’s inevitability was also hailed after his 14-point massacre of Newt Gingrich in Florida and lopsided victory in Nevada, outcomes that also sent his national poll numbers soaring. But Romney’s campaign paid little attention to the three contests that came immediately after Nevada, apparently assuming that momentum would do the job. This allowed the underfunded Santorum, who had poured considerable energy into Minnesota, Colorado and Missouri while Romney and Gingrich warred on the national stage, to score a surprise three-state sweep on Feb. 7 that thrust Romney right back into crisis mode.

It seemed we might be in for a repeat of this, with the first post-Michigan test in Washington – a caucus state where a late February poll had given Santorum an 11-point lead over Romney. But this time, Romney made sure Santorum had company in the state, campaigning in Washington last week and securing a 13-point win on Saturday. Instead of curbing Romney’s Michigan momentum, the Washington result reinforced it. And Romney is being similarly aggressive in Idaho, North Dakota and Alaska, three small Super Tuesday states. By taking no contest for granted, Romney is making it harder for Santorum to target small states and replicate his Feb. 7 surprise.

He also may be gaining the confidence of the conservative elites who’ve been standing on the sidelines. The endorsements of Cantor and (especially) Coburn are significant because each has credibility with the exact sort of Republican voter that’s been most resistant to Romney. And it’s possible that that credibility was holding them back – that they privately preferred Romney (if only because of the deficiencies of the other candidates) but feared being dubbed sellouts by their purist fans. Romney’s success this past week has made it safer for Republicans like Cantor and Coburn to come out for him publicly. A big day tomorrow could produce more endorsements like theirs.

Super Tuesday could still be a bad day for Romney. The latest polls in Ohio show an even race, and a Santorum win there would be the headline of the day, no matter what happens elsewhere. And Romney still might get wiped out in the South. But he could just as conceivably win Ohio and pick off a Southern state – and if he does that, he’ll be in store for an even bigger bounce.