In order to forestall an Israeli attack, the President binds the U.S. to a conflict with Iran to stop Iranian nukes 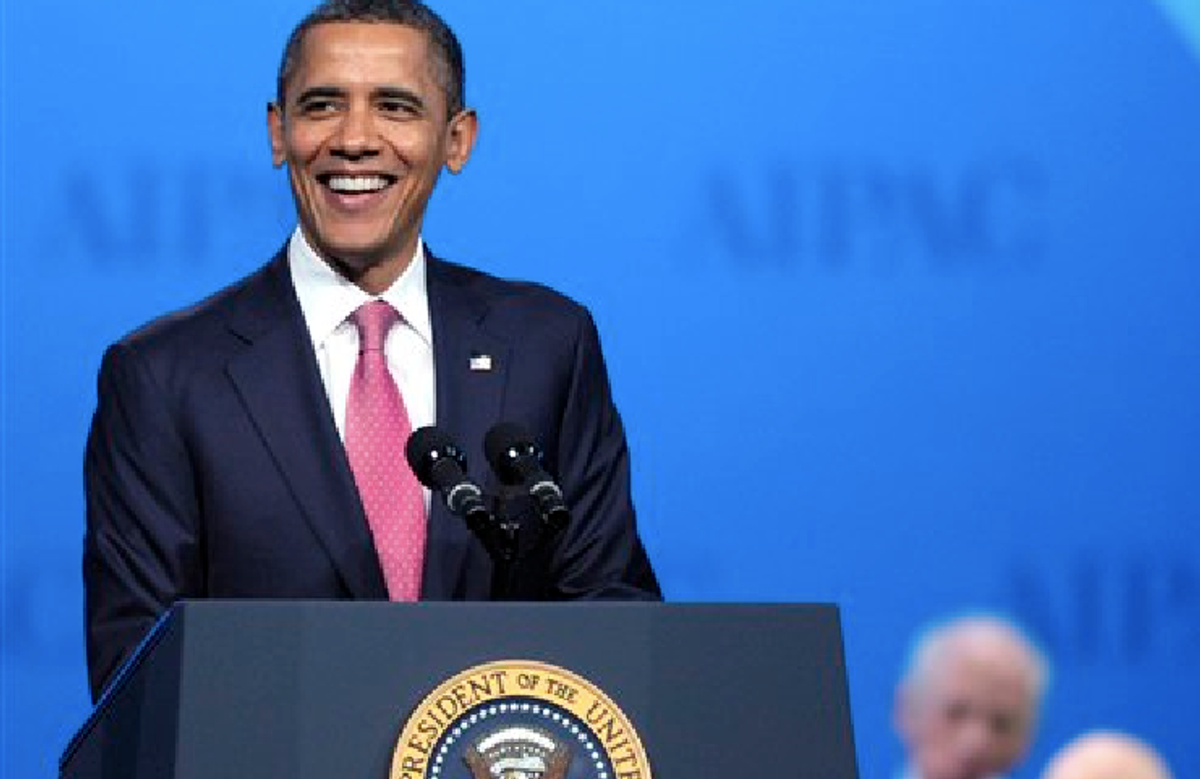 President Obama yesterday joined virtually every U.S. political leader in both parties in making the obligatory, annual pilgrimage and oath-taking to AIPAC: a bizarre ritual if you think about it. During his speech, he repeatedly emphasized that he "has Israel's back," rightfully noting that his actions in office prove this ("At every crucial juncture - at every fork in the road - we have been there for Israel. Every single time"). One of his goals was commendable -- to persuade the Israelis not to attack Iran right now -- but in order to accomplish that, he definitively vowed, as McClatchy put it, that "he'd call for military action to prevent Iran from securing a nuclear weapon." In other words, he categorically committed the U.S. to an offensive military attack on Iran in order to prevent that country from acquiring a nuclear weapon; as AP put it: "President Barack Obama said Sunday the United States will not hesitate to attack Iran with military force to prevent it from acquiring a nuclear weapon."

Is that not the classic case of a "preventive" war (as opposed to a "preemptive" war), once unanimously scorned by progressives as "radical" and immoral when the Bush administration and its leading supporters formally adopted it as official national security doctrine in 2002? Back in 2010, Newsweek's Michael Hirsh documented the stark, fundamental similarities between the war theories formally adopted by both administrations in their national security strategies, but here we have the Bush administration's most controversial war theory explicitly embraced: that the U.S. has the right not only to attack another country in order to preempt an imminent attack (pre-emptive war), but even to prevent some future, speculative threat (preventive war). Indeed, this was precisely the formulation George Bush invoked for years when asked about Iran. This theory of preventive war continues to be viewed around the world as patently illegal -- Brazil's Foreign Affairs Minister last week said of the "all-options-on-the-table" formulation for Iran: some of those options "are contrary to international law" -- and before 2009, the notion of "preventive war" was universally scorned by progressives.

Again, one can find justifications, even rational ones, for President Obama's inflexible commitment of a military attack on Iran: particularly, that this vow is necessary to stop the Israelis from attacking now (though it certainly seems that the U.S. would have ample leverage to prevent an Israeli attack if it really wanted to without commiting itself to a future attack on Iran). And I've noted many times that I believe that the Obama administration -- whether for political and/or strategic reasons -- does seem genuinely to want to avoid a war with Iran, at least for now.

But what this really shows, as was true for the run-up to the Iraq War, is how suffocatingly narrow the permissive debate has become. The so-called "gulf" between Israel and the U.S. -- the two viable sides of the debate -- consists of these views: (1) Iran should be attacked when it develops the capacity to develop nuclear weapons (Israel) or (2) Iran should be attacked only once it decides to actually develop a nuclear weapon (the U.S.). Those are the two permissible options, both grounded in the right and even duty to attack Iran even if they're threatening to attack nobody -- i.e., a preventive war. That it's unjustified to attack Iran in the absence of an actual or imminent threat of attack by Iran, or that international law (as expressed by the U.N. Charter) bars the use of threats of military attack, or that Iran could be contained even if it acquired a nuclear weapon, has been removed from the realm of mainstream debate (meaning: the debate shaped by the two political parties). Obama yesterday:

Iran’s leaders should understand that I do not have a policy of containment; I have a policy to prevent Iran from obtaining a nuclear weapon. And as I have made clear time and again during the course of my presidency, I will not hesitate to use force when it is necessary to defend the United States and its interests.

Just as was true in 2002 and early 2003, everyone agrees that a preventive war would be justifiable and may be necessary, and the only permitted debate is whether it should happen now or a bit later (where should the "red lines" be?).

Whatever else is true, by having President Obama issue these clear and inflexible threats against Iran to which the nation is now bound, the once-controversial notion of "preventive war" just became much more normalized and bipartisan. Witness the virtually complete lack of objections to President Obama's threats from either party to see how true that is.

Several other items of note:

(1) I have a contribution to the New York Times this morning on the question of whether the GOP faces its "last gasp";

(2) Politico's Josh Gerstein has an excellent article on President Obama's hideous record on transparency, including this quote from a long-time Washington lawyer: "Obama is the sixth administration that’s been in office since I’ve been doing Freedom of Information Act work. … It’s kind of shocking to me to say this, but of the six, this administration is the worst on FOIA issues. The worst. There’s just no question about it." The obsequious "transparency groups" which gave Obama a transparency award in 2011 (one he revealingly accepted in secret) should feel about as proud of themselves as the 2009 Nobel Peace Prize committee;

(3) The National Iranian American Council has a full-page ad in today's Washington Post urging Obama away from a military confrontation with Iran, and notably not only relies on quotes from numerous top military officials, but also includes a statement signed by multiple military leaders;

(4) Juan Cole has an excellent analysis of how the sanctions regime the U.S. is imposing on Iran in order to forestall an Israeli attack is harmful to U.S. national interests; and,

(5) Attorney General Eric Holder is scheduled today to deliver a speech in which he will reportedly "explain how the U.S. can legally kill U.S. citizens on foreign soil." Apparently, he will also, in the very same speech, trumpet how the U.S. Government has "successfully used civilian courts to convict and sentence terrorists." Perhaps he'll try to reconcile those two thoughts. One also wonders if his speech will contain a justification for this. I'll likely write about Holder's assassination-justifying speech later today.

UPDATE: Time reports on the reaction -- the "overwhelmingly positive" reaction -- to Obama's speech in Israel:

"Those disappointed by Obama’s speech yesterday, and it turns out there are such people, claim that he didn’t make a clear commitment to a military strike," wrote Ben-Dror Yemini in the daily Ma’ariv.  "Come on, really.  He couldn’t be clearer."

Yemini, a plain-spoken conservative regarded as the voice of the workaday Israeli, heard in Obama’s warnings to Iran’s ayatollahs the bass rumble of Israel’s right-wing political establishment.  "He didn’t say he would vote for the Likud.  But aside from that, one should pay attention, he sounded almost like the Likud leader," Yemini said. . . .

The analysts were no less enthusiastic in Yedioth Ahronoth, the largest paid daily. "Yesterday Obama gave Israel’s citizens a good reason to be friends of his," wrote Sima Kadmon, under the headline: "Shalom, Friend." "His speech was aimed directly at our nerve center, at our strongest existential fears.  Obama promised us that the United States would not accept nuclear weapons; it simply would not permit their existence….It was a good speech for us, even an excellent one.  We heard in it everything we wanted to hear—and heard that we have someone to rely upon."

I'm not sure that's true -- as I indicated, part of what Obama was doing was denying Netanyahu's demands that the American "red line" be moved to where the Israeli "red line" is -- but it is true that the U.S. categorically vowed to use its own military to prevent Iran from acquiring a nuclear weapon. Watch for Democratic operatives, pundits, cable news outlets and think tanks to herald all of this -- Israelis celebrate that Obama sounded like the Likud leader and gave them everything they "wanted to hear" -- as though it's a good thing.

UPDATE II: Please read Digby on the increasingly common and insufferable tendency of Democratic partisans to desperately play-act the role of Tough Warrior and defend Obama's foreign policy by proudly pointing to all of his glorious kills: the look-at-how-big-our-corpse-pile-is swagger that so many Good Progressives have adopted:

I guess there are Democrats out there who are really getting off on this macho posturing, but it smacks of the same sort of primitive schoolyard taunting that I hated during the Bush years. The celebration of assassinations, sanctions on innocent children --- oh, excuse me, "terrorists" in Iran --- is unseemly to say the least and not just a little reminiscent of the way our enemies tend to behave. It breeds more of that shallow cruelty that led Americans into the morass of Iraq in the first place. It's hard to see much daylight between the flagwaving chauvanism of the Bush administration and that chest thumping screed.

She cites a repellent rant by Paul Begala in which he taunts the GOP for failing to kill as many people via drones as the Democratic Commander-in-Chief has, but literally on a daily basis, I encounter Democratic operatives and loyalists of all types walking around beating their chests over Obama's "Toughness" -- i.e., his willingness to prolifically threaten military force and to kill. Just illustrating this mentality, during Obama's AIPAC speech yesterday, the Twitter feed of Christine Pelosi, Democratic strategist and daugther of Nancy, sounded like a drunken Karl Rove trying to prove what a Tough Guy George W. Bush is:

During the Bush years, weren't such people who loved prancing around with such Tough Talk and threatening war -- while not fighting in those wars -- maligned as sociopathic "chickenhawks"? Does that still apply?