The revolution will not be patronized

Ben & Jerry's (and others) get a cold shoulder when they try to donate to Occupy. Here's why 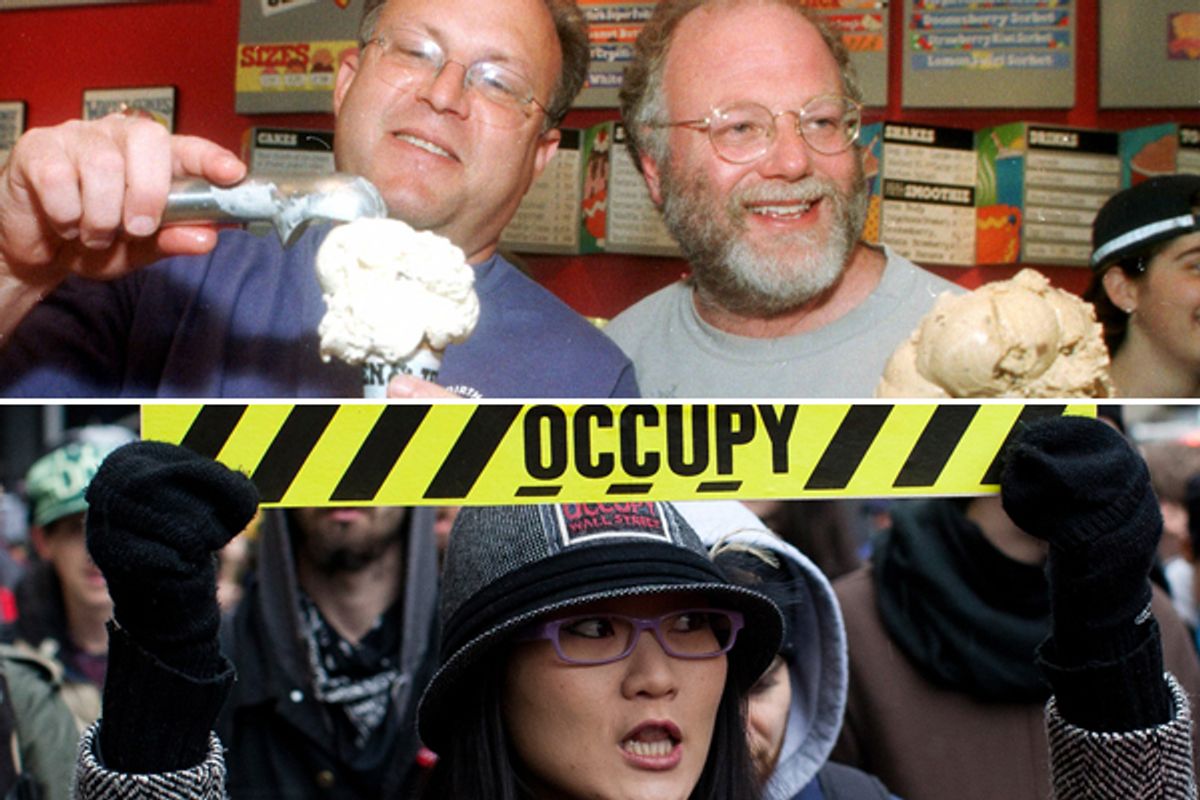 When it comes to political process, Occupy has never taken the easy route. In eschewing representative politics, the movement is partly characterized by its commitment to consensus-based horizontal decision-making models. It's arduous -- meetings last for hours, tempers are frayed -- you learn to extend the limits of your patience.

So why, then, when it comes to funding, would Occupy opt for the easy way?

In the past week, the offer of easy money came knocking. Ice cream moguls Ben Cohen and Jerry Greenfield of Ben & Jerry's, along with former Nirvana manager Danny Goldberg, want to be Occupy benefactors -- with an aim to raise $1.8 million for Occupy-related projects through a 501(c)(3) called the Movement Resource Group (MRG). As Jeff Smith, a member of the Occupy Wall Street press team, described the project in a post on the Daily Beast, "the 501(c)(3) is the latest incarnation of a group of wealthy donors who have been trying to plug into OWS for months."

$300,000 has already been raised, largely by Cohen's foundation. $150,000 would go to a "national office" in New York for Occupy operations. The other funds would go to national grants of up to $25,000 (proposals for these must go through a board "made up of five rich people and five occupiers selected by those rich people," as Smith put it). Other grants and stipends would support projects and "core activists," as determined by MRG.

Many Occupy supporters are deeply perturbed by the project. It's not an issue of accepting funds. Occupy has not ceded from its capitalist context: Projects, propaganda, support systems for occupiers with nothing, bail funds and so on still require money. How to procure and allocate money is, however, all important. MRG's model -- with a board elevating certain projects and plans above others using considerable sums of money -- flies in the face of the movement's horizontal and decentralized practices. An open letter to the Occupy Wall Street community from six Occupy supporters (who left the Occupy working group that spawned MRG) notes the reasons why Ben and Jerry and co.'s offer fails to cohere with the ethics of the movement:

MRG replicates the patronage model of funding rather than inviting community involvement in creating new ways to shape and support the movement. The MRG model perpetuates top down control and promotes actions and messages dictated by those who have money in our society, rather than by those who are disenfranchised by the wealthiest 1% ... By anointing a paid few to speak for the 99% MRG subverts the spirit of the Occupy movement and thus may actually prevent an authentically national Occupy movement from synthesizing.

The letter closes: "We have only a few unbreakable laws within OWS, the most important of them being 'don't speak for us.'"

Ben Cohen told concerned occupiers, "I guess what we hope to achieve is to help the movement grow and thrive.” I don't doubt his sincerity. But I doubt he realized that he didn't quite finish his sentence. Grow and thrive how? Grow and thrive on what terms and conditions? Does it not behoove Occupy to grow to develop better mutual aid practices; to thrive at working as much as possible without windfalls from ice cream magnates? Money is needed, yes, but MRG is proposing more than just money; it's offering a practical scheme. Many will argue that a practical scheme is just what Occupy needs; I couldn't disagree more. I've used this quotation more than once, but it bears repeating here: Oscar Wilde wrote that “a practical scheme is either a scheme that is already in existence, or a scheme that could be carried out under existing conditions. But it is exactly the existing conditions that one objects to; and any scheme that could accept these conditions is wrong and foolish.”

Efficient, centrally organized and well-endowed nonprofits and charities work very well at completing projects and achieving goals when it comes to politics-as-usual. However, much of Occupy's resonance relies on its refusal to work within conventional political frameworks. Even Occupy groups who have focused on engaging with congressional issues -- such as those in Occupy SEC pushing to strengthen and uphold the Volcker Rule -- organized collectively and horizontally. What MRG misses is that a rejection of politics-as-usual entails a rejection of funding-as-usual too.

There are a lot of nonprofits, a lot of charitably funded political groups and projects supported by grant money. There aren't a lot of confusing assemblages of thousands of people working in solidarity to reconfigure politics and change their lives in ways that defy expectation and understanding. If Ben, Jerry and co. understood the importance of Occupy in this light, they would offer support and money in a very different way: Likely they would forgo control over it. They wouldn't be so, well, patronizing.