You should care that the Kochs are seizing Cato 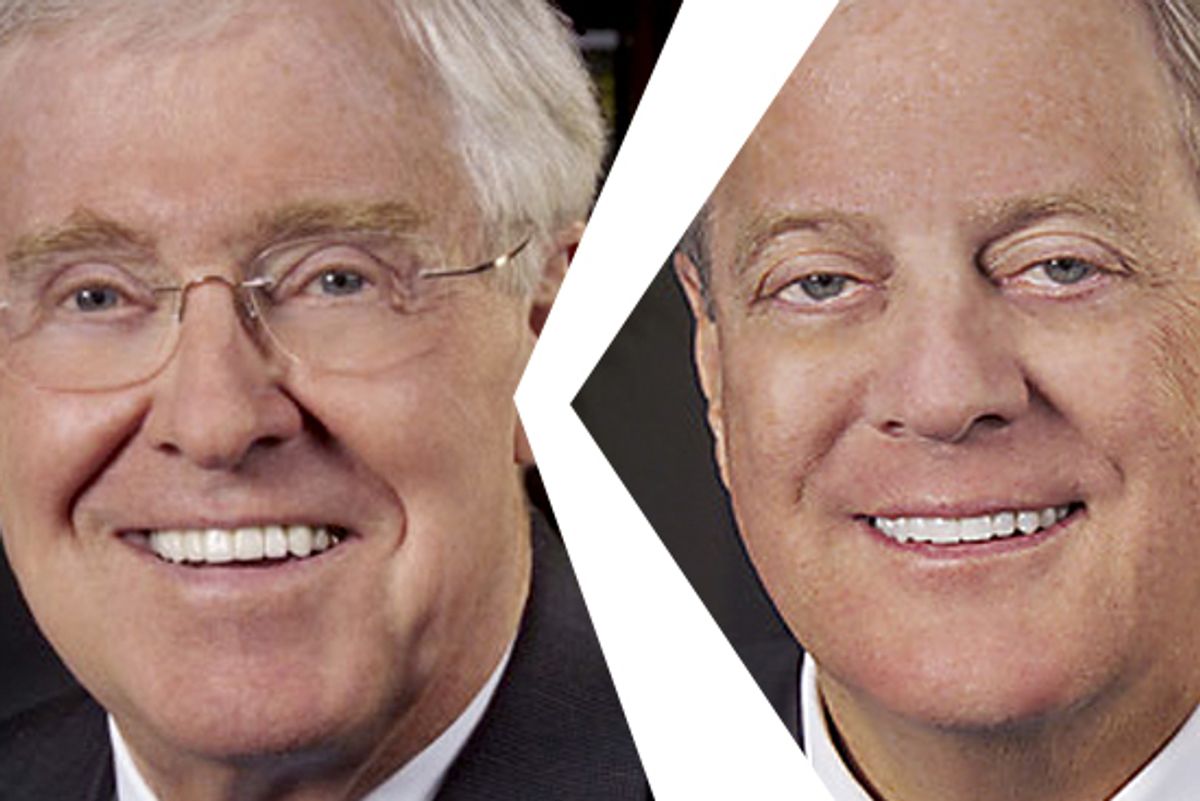 Charles and David Koch, of the famous anti-Obama billionaire Koch brothers, are attempting a sort of hostile takeover of the Cato Institute, one of the most prominent and independent arms of the D.C.-based American libertarian movement. Charles Koch co-founded Cato in the 1970s, but, as Dave Weigel explains, he left the think tank in 1991. David has been a minority partner since then, but the Kochs have largely left Cato to fund its libertarian research while they focused on polluting and evil cackling and other Koch-ish activities.

The Kochs have sued for the right to buy the shares in Cato held by the widow of co-founder William Niskanen. Their aim is basically to make Cato into another arm of their explicitly partisan messaging machine, along with Americans for Prosperity. To that end, they have already attempted to install some ridiculous Republican Party hacks on Cato's board of directors -- hacks like John "Hind Rocket" Hinderacker, the attorney and "Powerline" blogger with no history of support for "liberty" to speak of. Current Cato people are upset. Some have preemptively resigned, even. (Well, announced an intention to resign upon the completion of the Koch takeover, anyway.)

There are a lot of bloggers and political media people who have worked for/interned at/been paid by Cato, which explains in part why so much has already been written about the battle, but you should wish for an independent Cato Institute even if -- maybe especially if -- you're a socialist statist tool (like me). Cato is mostly antiwar, decidedly anti-drug war, and sponsors a lot of good work on civil liberties. That ... is basically what the Kochs don't like about them, because white papers on decriminalization don't help Republicans get elected. As Jonah Goldberg complains in a post that otherwise resolutely refuses to come to a conclusion or have a point, Cato has an annoying habit of not always seeing itself as a natural member of the glorious Republican coalition. (Current Cato headline: "It's Not Obama's Fault That Crude Oil Prices Have Increased." Oh, man, don't tell Americans for Prosperity that!)

Not that Cato is all good -- Cato did already purge the true "liberaltarians" back in 2010, ridding itself of some voices that sought to find more common ground between the left and the libertarian movement -- but it's more honest than AEI or the other industry-funded think tanks/glorified front groups operating in the same intellectual space.

One mildly amusing side effect of all this has been a bunch of pro-Cato libertarians continuing to mock liberals for imagining the Kochs to be powerful and nefarious while ... bemoaning their insidious plot to destroy Cato from the inside.