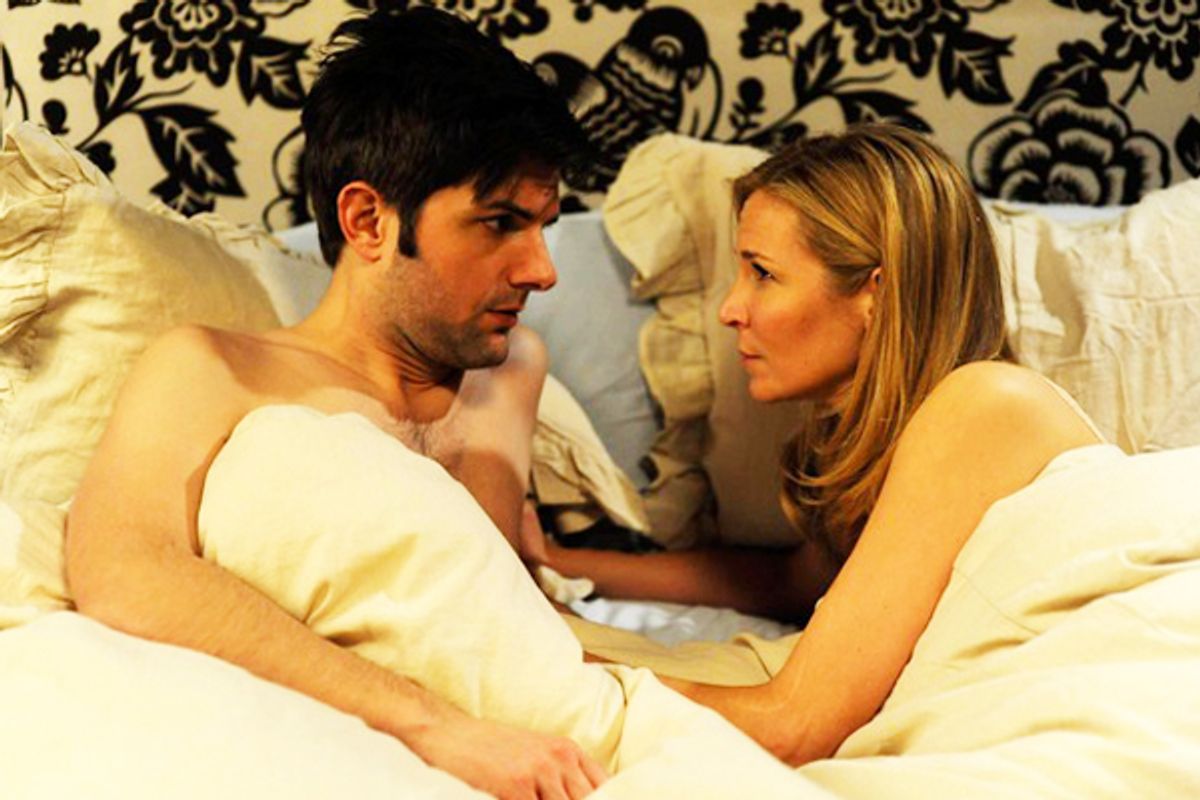 Adam Scott and Jennifer Westfeldt in "Friends with Kids"
--

We are living in a cinematic golden age. Exhibit A: that new Megan Fox movie.

The history of film is strewn with enterprising multi-hyphenates who knew how to rock a repertory. Orson Welles had pulled together a formidable troupe of regulars by the time he'd barely cut his wisdom teeth. Fellini and Hitchcock were known for their stock companies of familiar faces. But in recent years, strengthened by the talent pools of ensembles like the Groundlings and Upright Citizens Brigade, the power posse has become the norm -- and it's changing movies and television for the better.

Ten years ago, Jennifer Westfeldt co-wrote and played the title character in the entertaining little bi-curious romance "Kissing Jessica Stein." Now she's the writer, director and producer of one of the better anticipated movies of the spring – the reproductive comedy "Friends with Kids" -- with a cast that includes the ubiquitous Adam Scott, Kristen Wiig, Maya Rudolph and Chris O'Dowd, as well as the aforementioned chick from those "Transformers" movies. It certainly sweetens Westfeldt's marquee appeal that her partner – and a co-star of the film -- is none other than Don Draper himself, Jon Hamm. But what will likely draw butts into theaters for "Friends with Kids" isn't one star in particular, but the sum of its comic pieces. We've already seen Wiig, Rudolph, and Hamm score with "Bridesmaids." Scott's a reliably funny presence on the often pitch-perfect "Parks and Recreation," and has shown his ensemble chops in "Our Idiot Brother" (with fellow workhorses Elizabeth Banks and Paul Rudd) and in memorable bits for the biggest, loosest comedy troupe in the world right now – Funny or Die.

For over a decade now, the likes of Judd Apatow and Will Ferrell have been paving a new kind of path – and along the way have changed the way both veterans like Ben Stiller and younger guys like Seth Rogen and it girl Kristen Wiig have shaped their careers. Think of it as the visionary-as-clown – the person who can whip up a diarrhea joke and direct and produce and do a guest stint on "Saturday Night Live" -- and maybe wind up with a few Oscar nominations along the way.

What they – and now Westfeldt -- have in common is the apparent great talent for playing well with others. She's not Angelina Jolie, carrying blockbusters on her shoulders. She's not Robert Downey Jr., cranking out "Iron Man" and "Sherlock Holmes" sequels. She's more Robert Downey Jr. cutting loose in "Tropic Thunder." But what a movie like "Friends with Kids" represents isn't just an entrepreneurial spirit that's becoming more and more the norm, but a truly formidable contemporary pool of talent. Anybody can get together a bunch of buddies to make a movie. But to watch actors like Scott or Rudolph or Wiig within the same frame is to see performers who at this point now have a lengthy history in and out of each other's careers. Jon Hamm and Ellie Kemper didn't just make "Bridesmaids" together – Hamm was one of Kemper's high school drama teachers.

No wonder these actors know how to play off each other in a way that just seems to get funnier and more natural all the time. No wonder they move gracefully between acting and directing and writing for each other. And no wonder audiences are responding – comedy may rely heavily on self-deprecation, but there's an extra refreshing lack of ego in the generous way these stars continue to grace each other's work. Not everything they touch is brilliant, of course. ("Notes from the Underbelly"? Meh.) But the way they drop in on each other's television shows, pop up suddenly together in a Funny or Die clip, represents the best of the "Let's put on a show" spirit. It's a star system where the star is eclipsed by the constellation. And one in which the words "Friends" in a movies title seems, happily, like truth in advertising.