Rush Limbaugh and the poisoning of the GOP brand 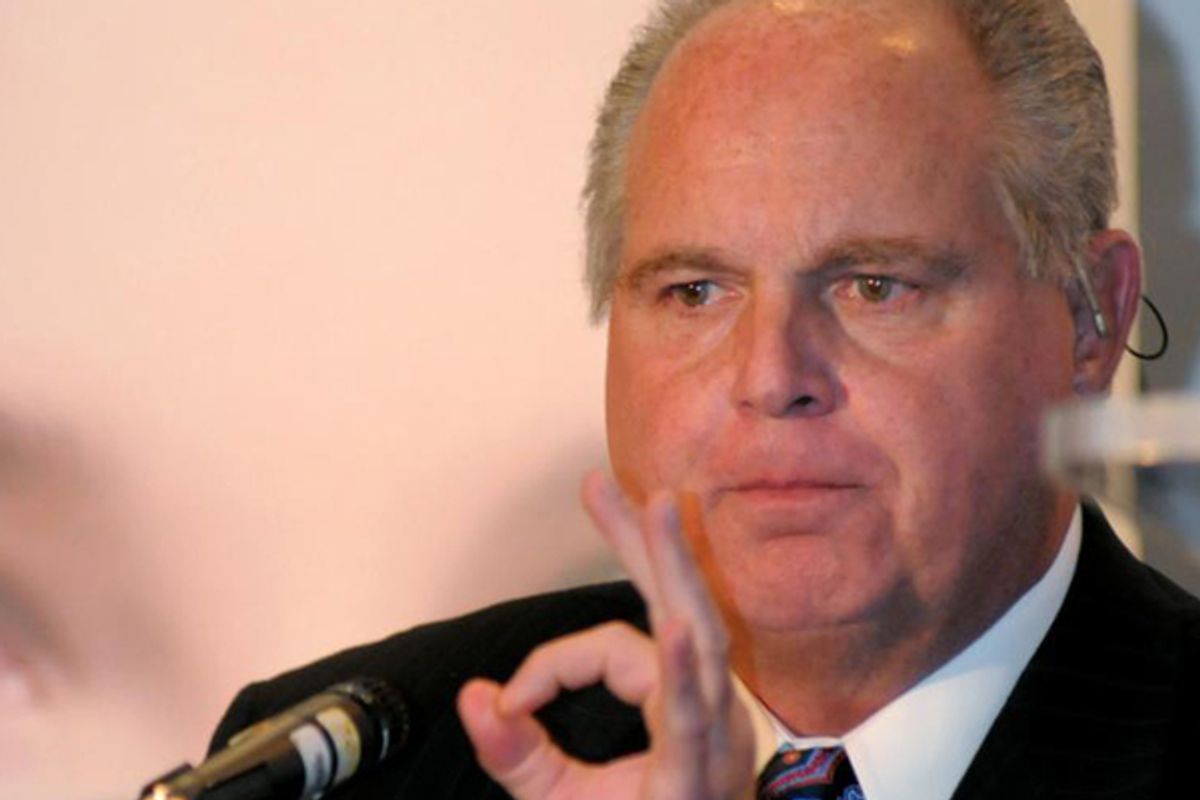 Sponsors are still bailing on Rush Limbaugh, who is apparently uninterested in expanding his very limited apology to Sandra Fluke, the woman he called a "slut" on his radio show last week. Limbaugh still seems unlikely to lose his show over this, and the controversy may even rally his core audience around him. But in the broader court of public opinion, the past week has undoubtedly served to worsen his already serious image problem.

Just before he made his comments about Fluke last week, a Harris poll found that Limbaugh is the most disliked "current affairs personality" in the country -- by far. Given a list of 26 different television and radio hosts and commentators, 46 percent of respondents picked Limbaugh as their least favorite, well ahead of second-place finisher Bill O'Reilly, who was chosen by 31 percent. On the flip side, only 9 percent cited Limbaugh as their favorite personality.

There was a time about a decade ago, back when he nearly landed a spot on "Monday Night Football" and ended up on ESPN's NFL pregame show, when Limbaugh seemed to be branching out and fashioning himself as his generation's Howard Cosell, a provocative broadcaster for all occasions, adored and detested in equal numbers. But the transition to sports didn't quite work out, and since then Limbaugh has been defined as a fundamentally political figure, one with a devoted following on the right but few fans anywhere else on the political spectrum (or among the nonpolitical masses). He is a broadly disliked public figure.

For Limbaugh himself, this isn't really a problem. He doesn't need widespread popularity to make a fortune in radio, and assuming he weathers the current storm, he should be able to host his show for years to come. But increasingly, it's a very big problem for the political party with which he's associated -- and that in many ways he's come to symbolize.

The cop-out for Republicans is to dismiss Limbaugh as a showman, and not a consequential political messenger. "I'm in a very different business," Rick Santorum claimed last week. But the general public probably doesn't see such a sharp distinction. Limbaugh's show is almost entirely about politics, and the themes he stresses invariably echo and influence the themes that Republican politicians across the country emphasize. And Republicans themselves have spent the past two decades promoting the image of Limbaugh as their leader.

After being shredded on-air by Limbaugh over the tax hike he signed, George H.W. Bush invited him to the White House in June 1992, and made a show of carrying his bags to the Lincoln bedroom for him. When the GOP won the House in 1994, the party's 73 freshmen members invited Limbaugh to their orientation dinner, where they honored him as a "majority maker." He hosted Bob Dole on his show in 1996, beat the drums exhaustively for George W. Bush in 2000 and 2004, and even admitted in the later years of W's presidency that he'd been carrying water for congressional Republicans. And when he's stepped over the line in recent years, Republicans have been painfully hesitant to take issue with him -- and when they have, they've often ended up apologizing to him.

This is what makes the context of Limbaugh's attack on Fluke so damaging for Republicans. It's not just that he said something awful about a 30-year-old woman who hadn't said anything about him. It's that he did so by way of amplifying the GOP's message on contraception. Republicans had been taking pains to claim their objections to the Obama administration's mandate that women be able to obtain birth coverage through their health insurance plans were all about protecting religious liberty -- that they weren't on some puritanical crusade. With his unparalleled platform, Limbaugh has made a mockery of that idea, and he's put a particularly nasty face on the GOP's posturing. As GOP consultant Alex Castellanos told the Daily Beast, "we have just handed [Democrats] the cudgel one more time, playing into the stereotype that Republicans are anti-women.”

The specific threat to Republicans involves a very specific type of voter: the unmarried woman. In 2008, Barack Obama beat John McCain by 41 points among single women, and John Kerry's 2004 margin over Bush was 25 percent. This is where the gender gap that we hear about every four years come from. Single women tend to be receptive to Democratic candidates, and hostile to Republicans and their culture war politics. As Greg Sargent noted, there is already some evidence that the contraception debate is pushing single women who had defected from the Obama camp back into his fold. The Limbaugh drama could accelerate this trend.

It's also worth noting that single women tend to participate in elections at a lower rate than married women. The Voter Participation Center estimates that if turnout levels were equalized at the married rate, roughly 6 million new unmarried women would head to the polls. In demeaning an intelligent, well-spoken 30-year-old single woman, Limbaugh is doing his part to wake these nonvoters up.

The broader threat to Republicans involves all swing voters. Limbaugh's comments about Fluke have attracted unusual attention, but he's been the source of all sorts of ugly remarks over the years -- and particularly during the Obama era. The GOP is now dealing with a serious image problem; the party's standing is as low as it's been since Bill Clinton's impeachment. It seems likely that the tone of the opposition to Obama is a reason for this. Polls continue to show that Obama is personally popular and that voters are cheering for him to succeed. That doesn't mean they'll automatically vote for him, but it does indicate that they don't share the snide, race-conscious contempt and resentment that Limbaugh foments every day.

Because they put Limbaugh on a pedestal all these years, Republicans have only encouraged Americans to regard his garbage not just as the rantings of a radio host, but as the message of the Republican Party.