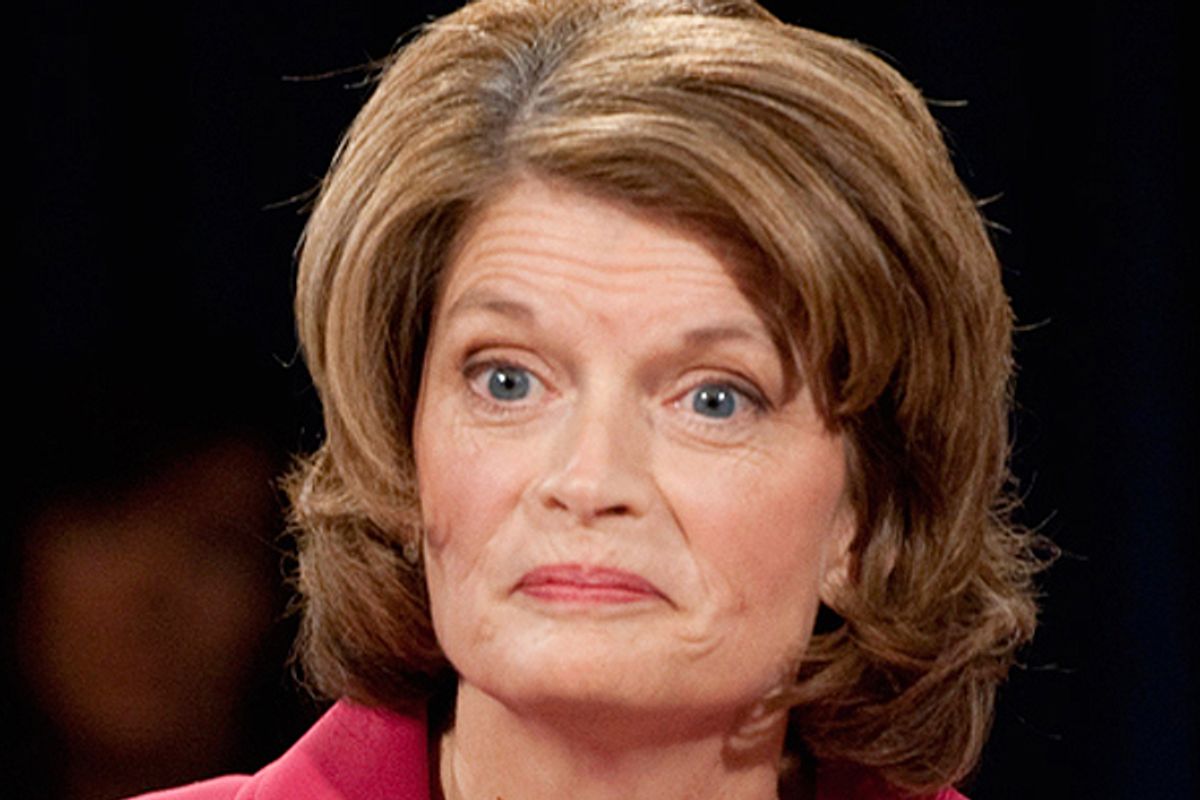 Whoops! Sen. Lisa Murkowski regrets a vote she took ... a few days ago. If she knew five days ago what she knows now, she never would've supported the Blunt Amendment, the add-on to a highway bill that would've allowed any employer with "moral objections" to refuse to cover contraception -- or any other health-related service or activity -- in their healthcare plans. Murkowski voted for the amendment, along with every other Republican save retiring Maine moderate Olympia Snowe. Now, one weekend later, she says sorry. She had no idea she was signing on to a hugely unpopular and politically suicidal campaign to restrict the rights of women!

Alaska's Murkowski is not quite a Snowe-level RINO, but she did rather famously lose a primary election to a Tea Party upstart in 2010, putting her solidly in the "too moderate for the modern Republican Party" camp. (She then won reelection with a rare successful write-in campaign, in part because the Tea Party upstart turned out to be a weird extremist with a history of paranoia and lying.) She is pro-choice. She is obviously pro-contraception. She just voted against those two principles because ... well, because she's a Republican, and it seems like a bunch of Republicans briefly convinced themselves that this issue was a winner, politically.

Then she went home to Alaska for the Iditarod, and according to the Anchorage Daily News, a bunch of her supporters gave her what-for.

"I have never had a vote I've taken where I have felt that I let down more people that believed in me," she said.

She'd meant to make a statement about religious freedom, she said, but voters read it as a vote against contraception coverage for women. The measure was so broad, it's hard not to read it that way. I suspect Murkowski saw that, but for reasons she didn't share with me, voted for it anyway.

Yeah, that isn't a great excuse. Two weeks ago Murkowski was aligning herself with the conservative Catholic bishops and practically adopting the "Obama's war on religion" talking point. Professional moderates like her are always shifting according to the prevailing political winds, but they usually don't reverse themselves so definitively quite so quickly. And it is an especially bad look to do so less than week after a controversial vote.

It should be clear that there's not actually room in the current party for pro-choice women -- it's clear to Snowe, it's fair to say -- and attempts by these 14 sad members of Congress to balance their needs to actually represent their constituencies with their responsibilities to party leadership will only get more difficult. The GOP basically just took a 40-year step back on reproductive rights, and everyone in the party who disagrees with that decision should have probably actively resisted it instead of apologizing after the fact.