"Silent House": One movie, one shot 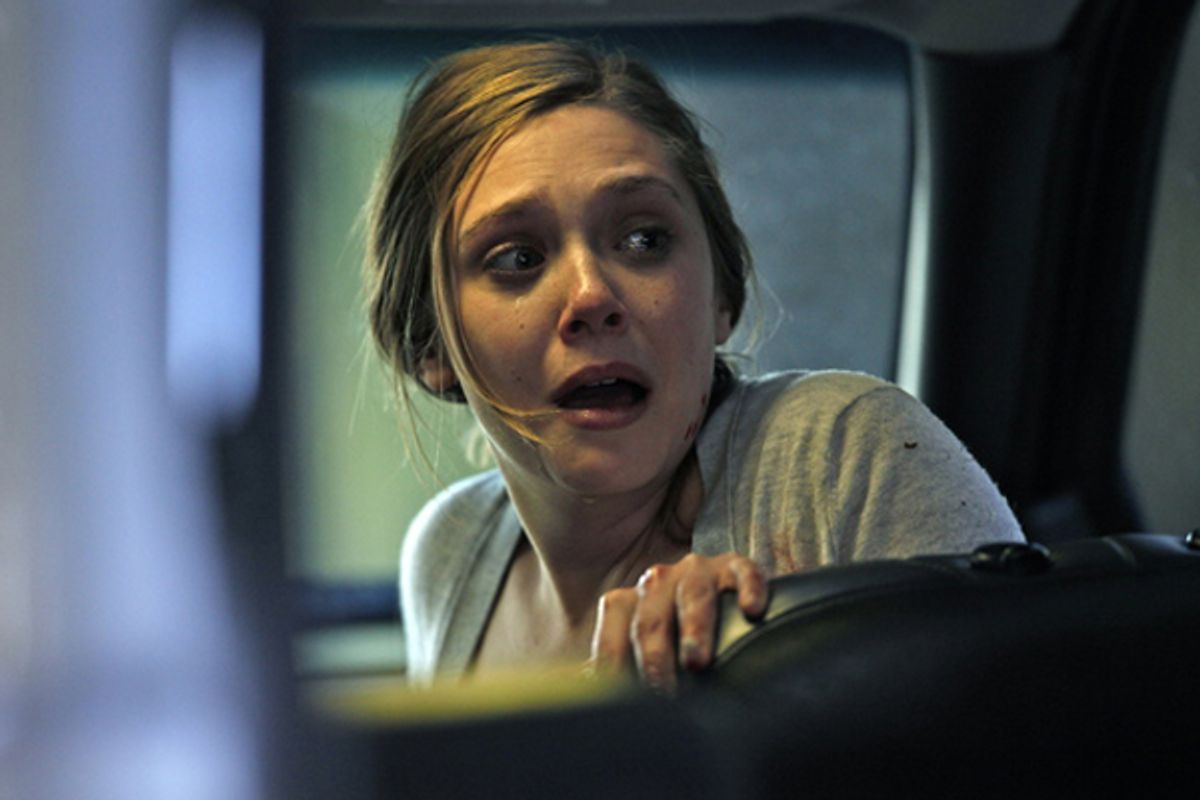 For the moviegoer who finds the rushed tempo, blunt force, spatial disorientation and general Michael Bay-ishness of movie editing these days depressing, it’s worth remembering that, in the beginning, the movies didn’t even have edits — they came to an end after the train had entered the station or the men had finished dancing or (more importantly) the film had run out. It wasn’t until filmmakers like Edwin S. Porter started making longer films with actual stories to tell that the idea of cutting from one action or shot to the next, changing points of view or scenes or locations, became part of the filmmaking vernacular. This was the custom for decades, but periodically, directors would decide to flex their cinematic muscles by removing from their toolbox the filmmakers’ single greatest source of audience control — the cut — and seeing how long they could make a scene go without one (while still maintaining action, movement and fluidity). Over time, long takes became an unspoken competition, each director’s long, unbroken tracking shot a little longer and a little more complicated than the last, each filmmaker proudly and breathlessly pushing further into the editless abyss.

And thus we arrive at the eventual (perhaps inevitable) destination of all that one-upmanship: Films done without cuts, entire stories told, seemingly, in one long take. The latest of these films is "Silent House," Chris Kentis and Laura Lau’s remake of the 2010 Argentinian horror film that employed the same stunt. “When we were asked if we wanted to do this, they said single take and it was like, wow,” says co-director Kentis. “Because it’s a chance to do something differently, and give the audience something different — and it’s a challenge.”

The story concerns Sara (Elizabeth Olsen), a young woman helping her father and uncle pack and fix up their lake house, which they’re hoping to sell. Rats have eaten the electrical cabling and squatters have smashed the windows (since covered with plywood), making the domicile into a classic flashlight-illuminated movie haunted house. As the film’s 86 minutes of real time unfold, the camera follows Sara as she slowly becomes convinced that someone is in the house and out to get her, with threatening figures and scary noises just off camera.

Is the device thematically intertwined with narrative? Maybe, maybe not. Kentis dismisses the idea that the technique is a “gimmick” (“When I think gimmick, I think scratch-and-sniff”), and says, “for this particular story, where you’re trying to inhabit and just tell it exclusively through this character’s point of view. We thought it was a good marriage.” But the film would probably get just as many scares if it were shot in a standard long/medium/close-up/shock edit form. It would also be more forgettable. As it stands, the picture’s primary subject is its style; the promotional materials give as much space to the trickery (“a tension-filled, real time journey, experienced in a single uninterrupted shot”) as they do to rising leading lady Olsen.

There will certainly be a portion of the audience that’s just looking for a good fright, who are unaware (on a conscious level, at least) of the single-shot gambit while watching the film and think nothing of it after. And Lau says that’s the goal. “If we’re successful, no one’s going to be paying attention to the fact that it’s one shot,” she says. “Movies are about story and character.  The fact that we hope that this is a different experience because of the continuous take should be something almost unconscious.” But a good chunk of "Silent House’s" viewers will bring in knowledge (and the accompanying expectations) of the artifice, and will spend the film on the lookout for possible hidden cuts. I only counted three, so I was surprised when Olsen told me there were 13 of them. “When you watch it, you try and look for it, and sometimes I would forget where we had a ‘stitch’ because it was so seamless,” she says.

Kentis and Lau acknowledge that awareness from their opening shot, an overhead angle looking straight down at Olsen, all but inviting savvy audiences to wonder how they’ll even get down from there, much less proceed to do the entire film in the one go we’ve been promised. Starting like that is an acknowledgment that we’re aware of the challenge they’ve laid out for themselves, and that they’re aware that we’re aware.

Understanding that self-awareness, and the gamesmanship and competitiveness between filmmakers, is vital to appreciating the continuing obsession with the unbroken shot. "Silent House" (in both its original and remake forms) is the film Hitchcock wanted "Rope" to be, clear back in 1948 — but Hitch’s cameras could only hold 10 minutes of film, so he had to mask his cuts with “stitches” as well. With the advent of digital video cameras (holding 90-plus minute tapes) around the turn of the century, filmmakers were suddenly able to do an entire film in one shot, and several did just that: Alexander Sokurov’s ambitious "Russian Ark," Spiros Stathoulopoulos’ "PVC-1," and Mike Figgis’ "Timecode," which upped the ante by breaking the frame into four quadrants, and put an unbroken shot into each of them.

But even the filmmakers who worked extended single-shot sequences into their films were, to some degree, engaging in a visual dialectic with each other — one that was sometimes explicitly expressed. Take Robert Altman’s 1992 film "The Player," whose opening credits run over an eight-minute unbroken shot in the parking lot and offices of a Hollywood studio, with secondary characters discussing the very type of long take that they’re currently participating in. Altman name-checks "Touch of Evil," "Absolute Beginners," "Rope" and "The Sheltering Sky," and has Fred Ward note (erroneously) that Welles’ "Touch of Evil" opening went on for six and a half minutes. The shot is actually only three and a half minutes long, meaning Altman more than doubled it.

Though there had been several other memorable extended tracking shots in previous years (the march through the trench in Kubrick’s "Paths of Glory," the Big Wheel ride in his "Shining," the traffic jam in Godard’s "Weekend," the languid closing shot of Antonioni’s "The Passenger"), there was a flurry of them in the 1990s, as Steadicam rigs grew more sophisticated and filmmakers grew more ambitious. The most famous came two years before "The Player," in Martin Scorsese’s "Goodfellas." The “Copa” sequence was justly celebrated for its technical wizardry; even viewers with only a passing knowledge of the logistics of filmmaking can guess at the complexity of this kind of on-the-go lighting and dialogue recording. (Doug Liman’s "Swingers" features a dialogue scene with group of actors marveling over the complexity of that scene, followed by a JV version of the shot they’re discussing.)

Others followed: Brian DePalma’s "Bonfire of the Vanities" begins with a virtuoso five-minute credit sequence that the filmmaker would top eight years later with the seven-minute unbroken opening shot of "Snake Eyes," following corrupt cop Nicolas Cage from backstage to ringside to an assassination at a heavyweight championship fight. With that shot, “he steals the crown,” Roger Ebert wrote, “from the famous long takes by Martin Scorsese in 'Goodfellas' and Paul Thomas Anderson in 'Boogie Nights.'” Anderson’s film came out the year before, with its memorable pool party scene, tracking from one conversation at a backyard get-together to another, ultimately following a pretty girl in a bikini right into the pool. In his audio commentary track, director Anderson admits swiping the shot directly from the 1962 Russian-Cuban long-take extravaganza "I Am Cuba." “I feel proud that we came back up out of the pool for dialogue,” Anderson says with a laugh. “Maybe that’s our addition to it, because they didn’t.“

What’s telling about all of these scenes, and sheds at least a shaft of light on why their directors went to the trouble of crafting them, is the subtext of control in each. "The Player’s" Griffin Mill, "Goodfellas’" Henry Hill, "Bonfire’s" Peter Fallow, "Snake Eyes’" Rick Santoro, "Paths of Glory’s" Colonel Dax, and "Boogie Nights’" Jack Horner are presented (at those points in their stories, anyway) as figures of power, men in full command of their worlds, the elements around them bending to their will — much like the directors who orchestrated these sequences. Casual viewers may not be consciously aware of the intricacies of these scenes, but they are, on some level, cognizant of the fluidity of the camerawork and the complexity of the events on-screen. Film is the director’s medium; by marshaling sequences spring-loaded with opportunities for chaos and disaster with smoothness and grace, the filmmaker mirrors his protagonist by exhibiting absolute power over his environment.

They’re showing off, is what it comes down to. And that is also, to some degree, what audiences are responding to. We like bravado, and in this age of hyper-documented filmmaking, with "E!" on-set reports and directors on Twitter and copious behind-the-scenes bonus features, we’re more aware than ever of what goes into making a film. The degree to which anyone truly “loses themselves” in a film — shedding their awareness of the frame and what’s happening outside of it there (on the set, where it’s all meticulously written, rehearsed and assembled) or here (in the theater, where that frame is projected onto a screen where we’re watching it with all these other people) — is hard to gauge, and certainly varies from person to person. But from the moment that the synthesized horns of the "Entertainment Tonight" theme first blared back in 1981, our hyper-awareness of the process of making a movie has become as much a part of the experience of watching one as the popcorn and the soda (or, for that matter, the story). Even on our inaugural viewings, we’ve already seen footage of how Joe Wright staged the Dunkirk Beach scene in "Atonement," or read about Alfonso Cuaron’s elaborate tracking shots in "Children of Men," and when those scenes arrive, we nod appreciatively at the technique of these directorial flourishes. Maybe that’s the argument for why the trickery works in a film like "Silent House"; aware that a blown line or missed blocking cue means going back (at least a little ways) and starting all over again, we experience a sense of suspense entirely separate from the noises in the attic.

Co-director Chris Kentis insists, “We’re certainly not intending to top anybody, let alone Hitchcock. The fact is, it was a chance to try to do something new, to make a film in a different way.” As moviegoers coalesce around the familiar (sequels, remakes, “reboots,” adaptations of TV shows, adaptations of comic books, adaptations of board games, for God’s sake), one of the few ways for a filmmaker to stand out from the crowd without the advantage of one of those known quantities is to tell a familiar story — in this case, a haunted house scarefest/psychological thriller — in a unique and somewhat daring fashion. If the style occasionally overpowers the substance, it also seems that we’re more and more capable, as an audience, or appreciating (or at least acknowledging) both.

If Godard was right, if every edit is, in fact, a lie, then there is a specific and fascinating truth at play within these sequences — one where the film in question runs, simultaneously, as both an actualization of its narrative and a documentary account of that actualization. The film becomes about itself as much as it is about its story. The question, at the end of the day, is whether that adds up to an advanced level of viewer engagement, or merely an elaborately staged Brechtian alienation device.