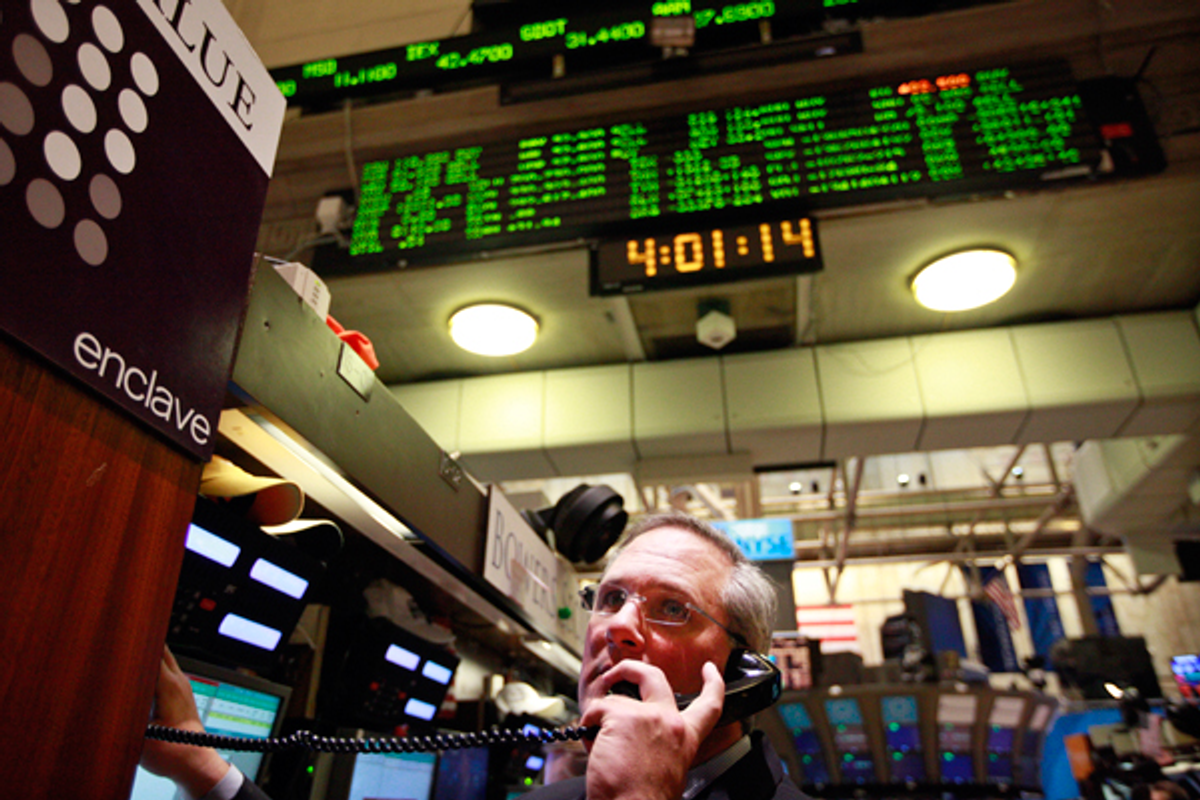 A trader looks up at the board just after the closing bell on the floor of the New York Stock Exchange, February 27, 2012. (Reuters/Brendan McDermid)
--

Facts are stubborn things, said founding father John Adams, a basic truth Ronald Reagan famously mangled at the Republican National Convention in 1988, when he tried to quote Adams and declared, “Facts are stupid things,” before correcting himself.

Nonetheless, in practice, certain financial and political leaders seem to embrace Reagan’s verbal misstep as closer to reality than Adams’ original aphorism. Witness the resistance on the part of banking institutions and certain members of the congressional leadership, despite regulations demanding that they allow facts and figures to be reported, information that could keep us from the edge of yet another economic meltdown.

The March 5 Wall Street Journal reported that as the Federal Reserve prepares to release the results of the latest round of stress tests, evaluating how banks would respond in the event of another severe financial crisis, “Bankers are pressing the Fed to limit its release of information — expected as early as next week — to what was published after the first test of big banks in 2009.”

“Three years ago, as the financial crisis was abating, the Fed published potential loan losses and how much capital each institution would need to raise to absorb them. This time around, the Fed has pledged to release a wider array of information, including annual revenue and net income under a so-called stress scenario in which the economy would contract and unemployment would rise sharply.”

The banks cite competitive concerns, but regulators “view full disclosure as critical to assuaging investor concerns about banks’ capacity to withstand a market shock or economic setback.” Add to the mix the banks’ fear of further government interference – when it’s of the nonbailout variety, that is – and continued resistance to the new rules imposed by the Dodd-Frank Wall Street Reform and Consumer Protection Act. In any case, they’re being assured by the Fed that it won’t release data “that rivals could mine for future acquisitions or other moves,” such as quarterly breakouts of projected losses.

Banks also are dragging their heels over a requirement that arose from last November’s G-20 meeting. Representatives of 19 of the biggest industrial and emerging nations, plus the European Union, decreed that the world’s largest banks – including eight from the United States – must create “living wills,” plans that lay out what they would do in the event of another crisis, including how banks could be stabilized or even shut down.

The wills are an idea that makes perfect sense. Think of them as a business model for the apocalypse. But drafts of the banks’ projected scenarios are due by June and must be completed by the end of the year, and the Financial Times reports, “Independent research showed only one bank out of 29 globally considered itself to have finished a draft recovery and resolution plan, according to a survey by Ernst & Young …  ”

“Living wills form a critical part of global efforts to avoid a recurrence of the 2008 financial crisis, when governments in the U.S., UK and elsewhere were forced to shell out billions of dollars in taxpayer funds to rescue troubled financial institutions. Some bankers also hope that regulators will reward institutions that write credible plans that allow an easier wind up with lower capital requirements.”

Off the record, bankers in the United States and the U.K. told the Financial Times that “cross-border disagreements among regulators were proving to be the biggest hurdle to writing comprehensive plans.”

Meanwhile, Simon Johnson, the savvy MIT and former International Monetary Fund economist, warns that if the Republican Party takes over both the House and Senate, they may attempt to force the heretofore nonpartisan Congressional Budget Office (CBO), which evaluates the impact of the federal legislature’s fiscal proposals, to switch to a scoring system “that would attach magical growth implications to tax cutting.”

“If you cut taxes, revenues will fall and deficits will increase. If you change the CBO’s scoring process to hide this fact — as is under consideration by leading Republicans on the House Budget Committee and the House Ways and Means Committee — you are engaging in exactly the same sort of deception that brought down Greece.”

So whether bankers or politicians, it’s those at the top — and not the facts — that are being stubborn. And maybe that other thing Ronald Reagan said facts were, too.