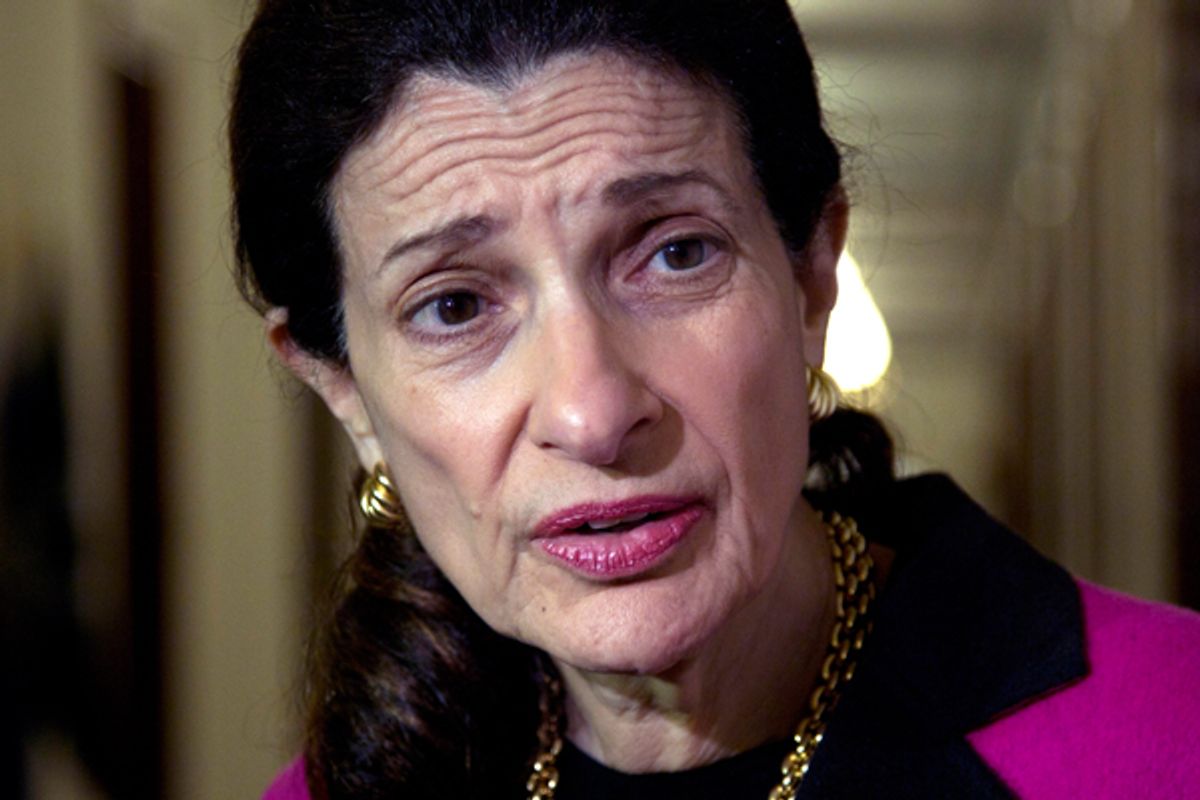 Right before renegade Republican Olympia Snowe cast the sole Republican vote against her party’s anti-birth control  bill, she announced her retirement from the Senate. The environment had gotten too polarized, she said, and close associates soon leaked her distaste for the party pressure to toe the line. The same week the New York Times carried a report about the electoral punishment of the handful of Republican state senators who had passed same sex marriage in New York. Beltway pundits predictably decried the decline of bipartisanship and the disappearance of the center from the political scene. Rockefellers gone, Lincoln Chaffee gone, with the latest resignation, it seemed fit to ask what had happened to the Snowes of yesteryear?

This is not a hard question. The answer is that they melted under the hot sun of the logical principle that holds you cannot say P and not-P at the same time. Gracious and lovely as the senator may have been, as the excellent Matt Yglesias described, her positions had “no logic behind them.” Liberals and conservatives don’t have a failure to communicate. They disagree. Critics play gotcha with the so-called centrists, asking how they can support same sex marriage and also give money to marriage opponent John Boehner. But that is such a cheap shot. The problem is not inconsistency on one position or another. There is no point at which a rational person can embrace both parties. For the two parties, roughly mapping onto liberal and conservative, it’s disagreement all the way down.

This is so, because, contrary to the wishful thinking of the why-can’t-we-all-just-get-along crowd, political principles don’t just come from nowhere. They start at the most fundamental level: What counts as knowledge? What does it mean to be a person? Different kinds of people require and deserve different forms of government.

So when Olympia Snowe cast her vote for birth control, she wasn’t just voting for birth control. She was actually saying something about the superiority of knowledge from science over knowledge from religious revelation and that being a person involves some degree of control over one’s fate, that women are people, in that definition, and that therefore, women deserve a government that protects their right to control their fate. Exactly where in that chain of reasoning might she find common ground with the other senators in her party, who think that believers in revelation-based sexual regulation should decide the fates of female persons and use the government to achieve that end?

More to the point, if revelation were not good enough for information about birth control, why would it be useful in other contexts, like the value of prayer in school or the cutoff of poor women from Medicaid funds for abortion, all positions formally endorsed by the other members of her party?

Indeed, the commitment to evidence-based policies undercuts much more than just fealty to the church as a source of political positions. Almost without exception, for example, economic experts agree that unregulated financial practices led to the economic disaster of 2008, and that tax cuts and austerity measures are the worst prescriptions in a recession. Yet the Republicans persist in advancing the unregulated market, regressive taxation and spending cutbacks with all the zeal of the Council of Nicea announcing the nature of the trinity. Their concept of a person as a productive, competitive, selfish individualist is so powerful that it laps backward and creates its own knowledge base. How could someone who embraces empirical fact-finding support the Republicans’ budget, much less their position on same sex marriage?

The foundational nature of the divide is why Times columnist Joe Nocera is so wrong that a Santorum-driven GOP meltdown in November would finally drive the party back to the mythical center. The Republicans believe they know what counts as evidence and what it means to be a person. The politics of Republican personhood are the inevitable products of those beliefs, not incidental policy positions they picked up, Bill Clinton-fashion, because they thought they would help win elections.

None of this is new. In the mid-'50s, William Buckley and a group of like-minded intellectuals decided to create a conservative movement built on foundational beliefs about what counts as evidence and what it means to be a person. Far from being discouraged by their stunning rejection the first time out of the box in 1964, the conservatives didn’t decide to move to the center; they simply redoubled their efforts at conversion. The current state of party politics in America is a direct result of that movement. Indeed, conservatism is the most successful political movement of the last half-century.

Olympia Snowe isn’t a virtuous symbol of a lost Golden Age. She is more like a belated convert to reality. She spent years voting as if the bipartisan world of shared values had not come to an end. As she now stumbles out of her cave of unreality, she is not some heroic representative of a better world. She is more like Japanese soldier found in hiding out in the Philippines in 1974 who had spent decades resisting the fact that World War II was over.