A new rise in anger at attacks on reproductive freedom 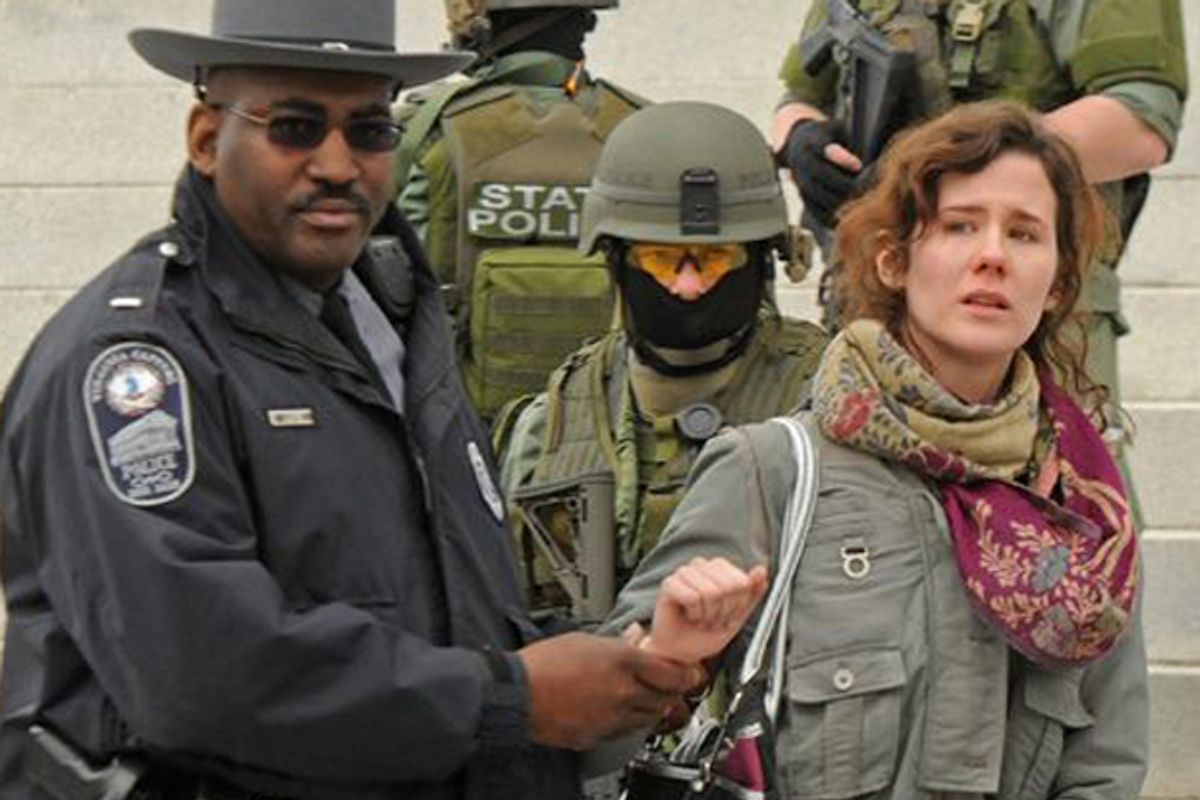 A woman protesting Virginia's mandatory ultrasound law is arrested on the capitol steps in Richmond on March 3. (Style Weekly)
--

Monday, at around the same time that the Democratic National Committee launched Stand With Sandra, to fundraise over the loathsome attacks on the reproductive rights activist Sandra Fluke, images of police in riot gear arresting peaceful protesters of Virginia’s mandatory ultrasound law were spreading on Facebook. “Never dreamed I’d be protesting for women’s rights in 2012 in Virginia,” read one sign.

Not everyone was surprised. The activists who have for years protested online, in person or in the courts – when women were attacked with fierce misogyny simply for existing in public, when women’s healthcare was stigmatized and subject to punishing double standards, or, for that matter, when seven states passed mandatory ultrasound laws – had another sign to represent them: "I cannot believe I still have to protest this shit." But this time, they weren't drowned out, they were joined with fierce, spontaneous energy. As my colleague Mary Elizabeth Williams put it, though she worries about her daughters facing a "harder and meaner" world for women than the one she grew up in, “I haven't felt this strong a sense of ‘We are not helpless and this is not OK’ in a long time."

That sense is evident not just because the attacks on women's reproductive rights and bodily integrity have intensified, although by every metric they have. It's also because of the growing realization that these aren't isolated incidents, but rather systematic attacks based on a worldview that is actively hostile to female self-determination. And that realization is changing the game, even if that game is still made up of moved goal posts and partial victories.

Republicans are still scrambling to understand how much has shifted, though Democrats have gleefully jumped on the opportunity, only three months after the Obama administration was the justifiable target of pro-choicers for running scared on Plan B access. (Would that same capitulation have happened today, in this climate? It’s worth wondering.) You could almost forgive Virginia Gov. Bob McDonnell for sounding baffled about the outcry over “transvaginal ultrasounds,” telling the National Review that “Virginia will now join nearly half the states in America that have some kind of ultrasound law. You wouldn’t know that from the coverage; you would have thought Virginia was doing something that had never been done.” He was right, as far as Virginia's lack of innovation, but he had the relative misfortune of pushing his paternalistic, humiliating ultrasound mandate after the communal outrage over the Susan G. Komen Foundation punishing low-income women because Planned Parenthood also performs abortions, and after the image of the all-male panel on contraceptive access went viral.

And Rush Limbaugh has managed to get away with his sexist and racist slurs for years without any real repercussions, even if his attack on Sandra Fluke, a young, articulate woman whose sole crime was to testify before a House committee, was particularly vile. As writer Bilal Dardai tweeted, “If 'slut' ends up being what brings down Rush, it's a bit like getting Capone on tax evasion. I'll take it, but so many crimes unanswered.”

Why were Rush Limbaugh’s advertisers dropping by the hour this time around? A CEO of one advertiser told the New York Times that he’d seen shock-jock backlash before – notably with Howard Stern -- but back then, “Social media was nowhere where it is today,” he said. But social media can’t be mobilized without genuine rage, and that’s what we’ve been seeing these past weeks. And it started with Komen, which fellow Salon writer Rebecca Traister describes as "one of the most un-coerced, unmitigated, unplanned visceral displays I've seen in decades."

As I type this, right-wingers are spinning conspiracy theories about how the Obama administration cooked up the entire affair, how House Democrats allegedly forced Darrell Issa’s hand in barring Fluke from testifying at his hearing, in a document titled “Lines Crossed: Separation of Church and State. Has the Obama Administration Trampled on Freedom of Religion and Freedom of Conscience?” Presumably, Democrats also forced Rush Limbaugh to spend three days trashing Fluke for speaking up for insurance coverage of contraception and to air prurient fantasies demanding that she film herself having sex -- and endowed him with millions of listeners and the fealty of Republican leaders while they were at it.

Let’s put aside for a minute how many on the right don’t seem to know how hormonal contraception works, or, assuming they have heterosexual sex at statistically likely rates, how it is that their wives manage to not be perennially pregnant. (The writer Amanda Marcotte has memorably referred to this as the belief in “contraception fairies” that take care of it all.)  Or, for that matter, the misconception that a taxpayer subsidy is what’s at stake here, instead of a regulation for a privately provided benefit that comes out of employee wages.

The point is that Limbaugh went wildly off message from the pretense that this was about religious freedom, and fellow members of the right hastened to agree with him that this was actually about recreational sex. On Monday, a lone temperate voice in the conservative wilderness pleaded, “The Obama administration would like nothing more than to drag opponents of the HHS mandate into debates over the character of a particular young woman or the moral permissibility of contraception. These are traps. Don’t walk into them.”

If you believe that women who are about to have abortions don’t realize they’re pregnant, and that they need to be “empowered” by being shown a picture of their “child” (misrepresentations are courtesy of McDonnell), to teach them a lesson about what’s at stake, you’re a misogynist. Even if you’re not forcing them to have a transvaginal ultrasound.

The precise truth of the Virginia ultrasound bill, set to become law any day now, is not where the ultrasound wand goes. It's the exception for rape victims -- but only if they reported it, which many survivors don't. In other words, it’s OK to violate the bodily integrity of a woman who consented to sex, but not if she didn't ask for it.

This is the moment where all of the tweeters calling themselves #sluts in solidarity converged with the last time activists mobilized around the word: last year, with the wave of Slutwalks. Those were seen, rightly, as part of a youthful feminist resurgence – a Spartacus-like uprising against victim-blaming – but protesting against a societal attitude, even as articulated by a clueless cop, is a fuzzier proposition than pushing back against a coordinated attack on reproductive freedom, made up of very concrete laws put into place by very deliberate political officials. But when those officials, and the mouthpieces of their movement, make plain their belief that you are a dumb slut without the right to bodily autonomy, simply for being female, women can connect the dots.

It now falls to the people for whom this type of outrage and organization is nothing new to marshal that broad-based enthusiasm into something more lasting and less incremental – and more critical. When Limbaugh calls Fluke a slut and a prostitute simply for speaking out in favor of a public health policy and Michael Moore demands, “Who’s the prostitute now, bitch?” two sexist and sex worker-stigmatizing wrongs don't make a right. When pushing back at those same attacks, it's crucial to realize the ways in which Fluke's whiteness and education make her the "perfect victim." When Texas is currently implementing the country's most draconian abortion ultrasound law, with forced viewing, even as it cuts crucial family planning funding, it's accurate to call this, as Nicholas Kristof did, "abuse," but also to point out, as pro-choicers have been, what's wrong with "safe, legal, and rare."  When attacks on birth control coverage imply that women who use it are greedy whores, even when they're testifying on behalf of women who had lost ovaries or been too afraid to seek care after being raped, it's important to note that married women use contraception and that it's used for non-sexual purposes too, but it's also important to stand up for the fact that women have a right to equal access to healthcare even if they are having sex five times a day.

The Rush Limbaughs of the world don't get to define the boundaries of appropriate sexual or moral behavior. But something is happening: Women are defining those boundaries for themselves, with many men alongside them, and they're being reminded that there's a concerted movement to take that right of self-definition away. And we're mad.