Reporters of corporate malfeasance aren't imprisoned. Their complaints are just brushed under the rug 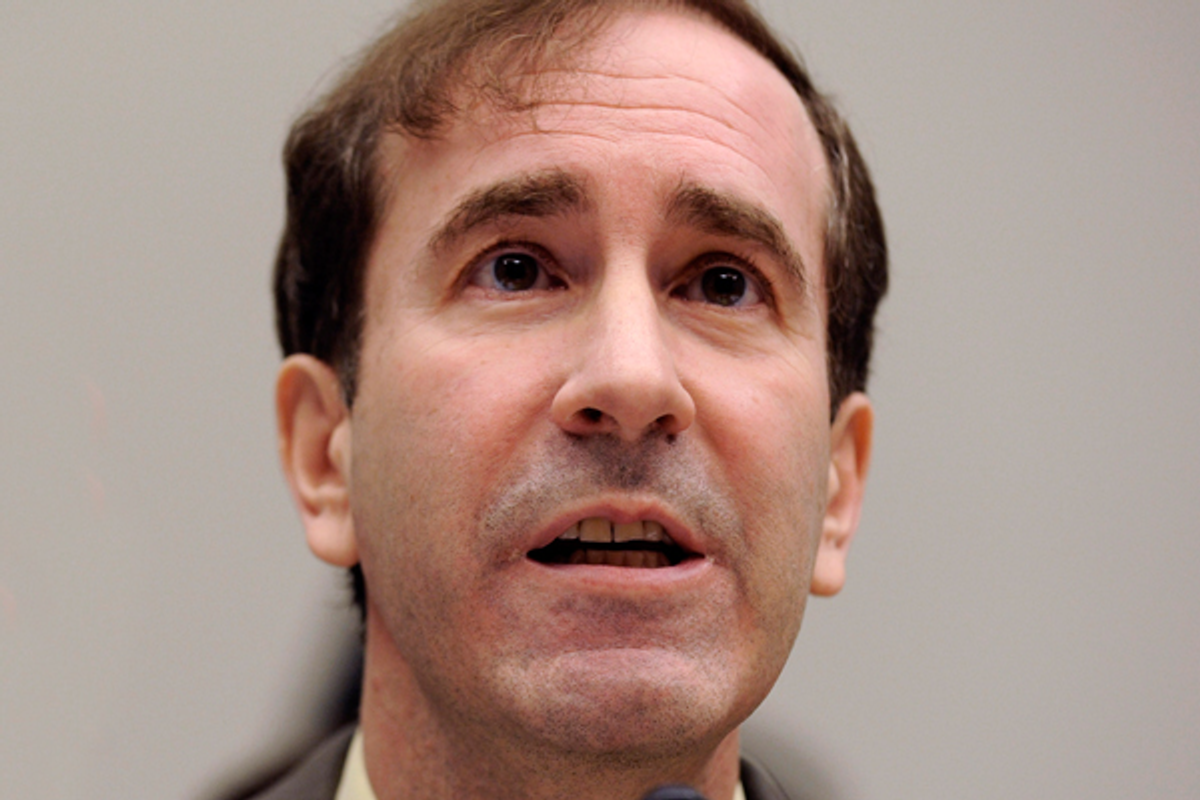 What’s worse: to be persecuted and indicted for trying to expose an act of wrongdoing -- or to be ignored for doing so?

Whistle-blowers have been under intense scrutiny in Washington lately, at least when it comes to the national security state. In recent years, the Obama administration has set a record by accusing no fewer than six government employees, who allegedly leaked classified information to reporters, of violating the Espionage Act, a draconian law dating back to 1917. Yet when it comes to workers who have risked their careers to expose misconduct in the corporate and financial arena, a different pattern has long prevailed. Here, the problem hasn’t been an excess of attention from government officials eager to chill dissent, but a dearth of attention that has often left whistle-blowers feeling no less isolated and discouraged.

Consider the case of Leyla Wydler, a broker who, back in 2003, sent a letter to the Securities and Exchange Commission (SEC) about her former employer, the Stanford Financial Group. A year earlier, it had fired her for refusing to sell certificates of deposit that she rightly suspected were being misleadingly advertised to investors. The company, Wydler warned in her letter, “is the subject of a lingering corporate fraud scandal perpetrated as a ‘massive Ponzi scheme’ that will destroy the life savings of many, damage the reputation of all associated parties, ridicule securities and banking authorities, and shame the United States of America.”

It was a letter that should have woken the dead and, as it happened, couldn’t have been more on target. Wydler didn’t stop with the SEC either. She also sent copies to the National Association of Securities Dealers (NASD), the trade group responsible for enforcing regulations throughout the industry, as well as various newspapers, including the Wall Street Journal and the Washington Post. No one responded. No one at all.

In the fall of 2004, Wydler called the examination branch of the SEC’s Fort Worth District Office to relay her concerns. A staff person did hear her out, but once again nothing happened. More than four years later, as the aftershocks of the global financial meltdown continued to play out, the news finally broke that Stanford had orchestrated a $7 billion Ponzi scheme which cost thousands of defrauded investors their savings.

Wydler might have preferred the attention of the Espionage Act to the dead silence that greeted her efforts, and she was hardly alone. As with her, so with Eileen Foster, a former senior executive at Countrywide Financial who, in 2007, uncovered evidence of massive fraud -- forged bank statements, bogus property appraisals -- perpetrated by a company that played a major role in the subprime crisis that eventually caused the U.S. and global economies to implode. No one listened to her then and no one -- in the government at least -- seems to care now, either.

Interviewed recently on "60 Minutes," Foster said she would still be willing to provide the names of people at Countrywide who belong in jail, if she were summoned to testify before a grand jury. She may never get the opportunity. As "60 Minutes" reported, a Justice Department that has gone to such extraordinary lengths to prosecute national security whistle-blowers has made no effort to contact her.

The experiences of corporate whistle-blowers like Foster and Wydler underscore a truth highlighted by legal scholar Cass Sunstein in his book "Why Societies Need Dissent." The voices of dissidents who have the courage to bring uncomfortable news to light -- information that can prevent disastrous economic or other blunders from happening -- matter only to the extent that anyone pays attention to them.

“A legal system that is committed to free speech forbids government from silencing dissenters,” observed Sunstein. “That is an extraordinary accomplishment.” But as he went on to note, the formal existence of this right hardly ensures that individuals who exercise it in situations that cry out for opposition have an impact. “Even in democracies, disparities in power play a large role in silencing dissent -- sometimes by ensuring that dissenters keep quiet, but more insidiously by ensuring that dissenters are not really heard.”

And it seems that, if the present House of Representatives has anything to say about it, the law will soon ensure that corporate whistle-blowers are silenced anew. Although the financial meltdown of 2008 didn’t exactly inspire the Justice Department to hold high-ranking Wall Street executives accountable (to date, not one CEO has been prosecuted for fraud), the abusive practices and billion-dollar scams that regulatory agencies somehow overlooked did prompt some reform. As part of the Dodd-Frank Wall Street Reform and Consumer Protection Act, Congress put in place new rules that, at least theoretically, enhanced the protections and incentives available to whistle-blowers.

One provision of Dodd-Frank, for example, allows employees to bypass corporate internal compliance programs and report violations directly to the SEC. Another provides rewards for Wall Street whistle-blowers who step forward and offer the government tips that lead to successful prosecutions of fraud.

But even these modest steps may soon be reversed. Last year, Congressman Michael Grimm, R-N.Y., unveiled the antidote to Dodd-Frank’s gestures toward the urge to leak. His “Whistle-blower Improvement Act” -- a name that Orwell might have appreciated -- would do away with the Dodd-Frank protections, such as they are, which the U.S. Chamber of Commerce and other industry groups lobbied against and continue to vigorously oppose.

Grimm’s proposal would indeed mark an “improvement” -- for companies hoping to deprive whistle-blowers of their voices. If passed, it would strip the financial rewards from Dodd-Frank and require most whistle-blowers to first report problems to their employer before even thinking about going to the government. “This would be like requiring police officers to tip off suspects before they begin an investigation,” the Project on Government Oversight has wryly observed.

Harry Markopolos, a financial analyst who repeatedly tried to warn the SEC about Bernard Madoff’s Ponzi scheme -- and who, like Leyla Wydler, was persistently ignored -- has said the law “reads as if it were a wish list from those who once designed the Enron, Madoff, Global Crossing, Stanford and WorldCom frauds.” Evidently, that only proved an incentive for the House Subcommittee on Capital Markets to approve Grimm’s measure in December 2011, on a party-line vote, which means it could now be tacked onto some must-pass piece of legislation and enacted.

Should the Grimm Act eventually become law, it would not mark the first time corporate whistle-blowers had been encouraged to step forward in the wake of rampant abuse and misconduct, only to discover that public officials had no intention of emboldening them to speak out. Back in 2002, after the accounting scandals broke at Enron and WorldCom, President George W. Bush signed the Sarbanes-Oxley Act, which made it a crime for companies to retaliate against employees who reported suspected fraud and illegal activities.

“The era of low standards and false profits is over,” Bush declared at the time. “No boardroom in America is above or beyond the law.” It didn’t quite turn out this way. In fact, his administration promptly set about staffing the federal agency in charge of whistle-blower complaints with judges determined to deprive employees who reported suspected fraud of the protections they thought they’d just been guaranteed.

According to the Wall Street Journal, of 1,273 complaints filed by employees who claimed they had been subjected to company retaliation for speaking out between 2002 and 2008, the government ruled in favor of whistle-blowers 17 times. Another 841 complaints were dismissed unheard, sometimes thanks to minor technicalities. Other times they were tossed out because the potential whistle-blowers worked at the private subsidiaries of publicly traded companies, which the Department of Labor bizarrely decided were not covered by the statute.

Some might assume that, if the government ignores corporate whistle-blowers again, a citizenry incensed by the greed and recklessness of Wall Street is not likely to allow history to repeat itself. But this might be wishful thinking. Despite the lore of the whistle-blower that pervades popular culture, Americans turn out to be less sympathetic to such dissenters than Europeans. Drawing on data from the World Value Surveys and other sources over multiple years, the sociologist Claude Fischer has found that U.S. citizens are “much more likely than Europeans to say that employees should follow a boss’s orders even if the boss is wrong.” They are also more likely “to defer to church leaders and to insist on abiding by the law,” and more prone “to believe that individuals should go along and get along.”

Whistle-blowers may often be praised in the abstract and from a distance, but Americans have a tendency to ignore or even vilify them when they dare to stir up trouble in their own workplaces or communities. In the case of Leyla Wydler, it wasn’t just the SEC that disregarded her warnings about Stanford. It was also her fellow brokers, none of whom came forward to defend her and her clients, who for the most part brushed aside the concerns she voiced about Stanford’s certificates of deposit (and so their own investments).

Later, after the facts had come to light, Wydler testified at a Congressional hearing in Baton Rouge, La., before an audience full of defrauded investors. She received a standing ovation. The belated recognition felt nice, she told me, but it would have felt a lot better if more people had listened to her beforehand, and maybe even stood by her side.

If we really want to honor people like Wydler, we ought to make sure that financial industry whistle-blowers who emulate her example in the future don’t have to languish in isolation or wait so long for the applause, and that, unlike Eileen Foster, Harry Markopolos and Leyla Wydler, they will be spared the silent treatment.

Eyal Press is the author of the new book "Beautiful Souls: Saying No, Breaking Ranks, and Heeding the Voice of Conscience in Dark Times". His work has appeared in The Nation, Lingua Franca and other publications.