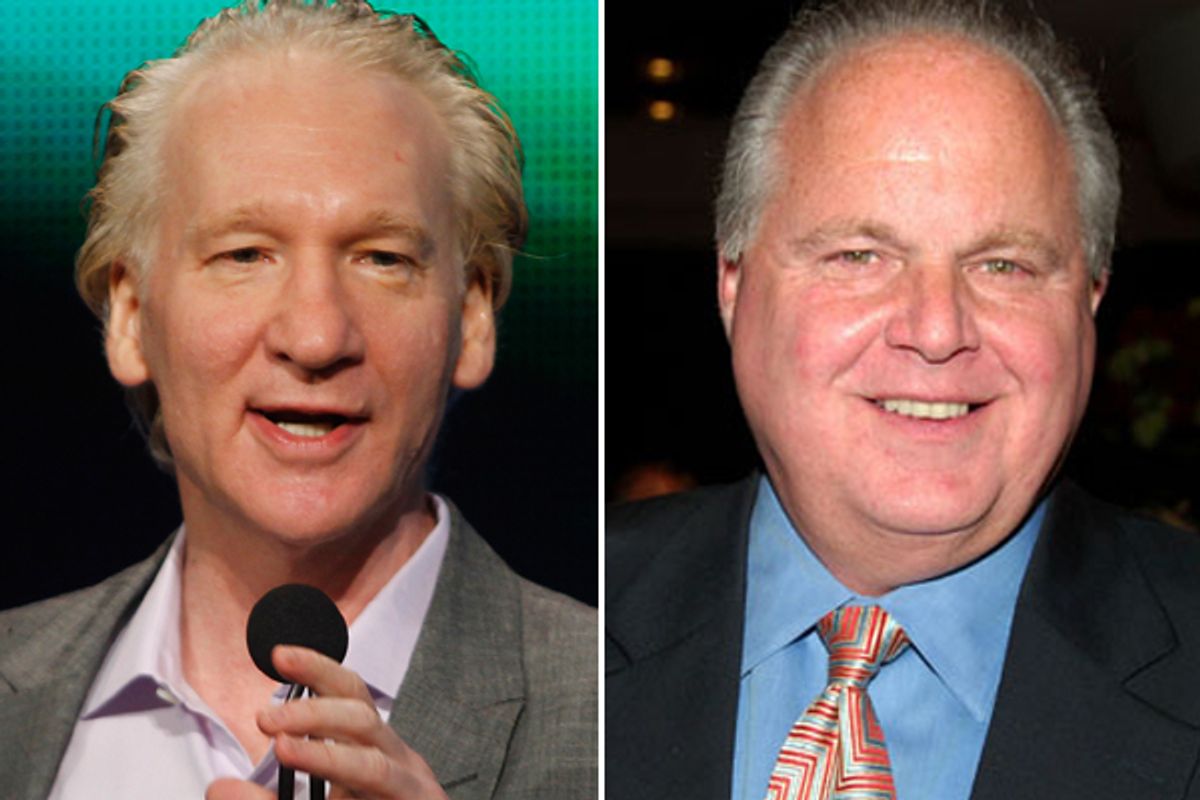 After admitting that he does "Hate to defend #RushLimbaugh," Bill Maher went on to tweet Tuesday, about the radio host: "he apologized, liberals looking bad not accepting. Also hate intimidation by sponsor pullout." Wait, who looks bad here? My sides, they're splitting!

Maher, of course, is a professional provocateur, a guy who views himself as an equal opportunity fly in everyone's ointment. But he's also the man who recently gave a cool million dollars to Obama's super PAC and once suggested "don't ask, don't tell" be overturned purely "because it will make Rush Limbaugh explode like a bag full of meat dropped from a helicopter." As such, he no doubt felt uniquely qualified to appeal to the left's sense of justice. And no doubt there are plenty of talking heads – the ones who erroneously keep insisting that liberals and feminists have no problem with Maher's track record of offensive remarks – who'd go along with him.

But as a matter of fact, lots of us were revolted when Maher called Sarah Palin a "cunt" and a "dumb twat," and were grossed out by his ill-timed assessment of Lara Logan's "intrepid hotness" last year. We actually don't find sexism adorable just because someone lets Marc Maron on his show.

Maher has, quite rightly, said that "When you are a public figure you're out there and you're fodder for comedians to make comments on you." And when you're a comic and a genuinely smart guy, you can probably do it without reducing a woman to her genitals. Women can take criticism and satire just fine. It's the misogyny that gets old.

Moreover, here's a reminder. Limbaugh's remarks about Sandra Fluke were not about a "public figure" –- they were about a relatively unknown law student. They were made again and again, dozens of times, over a full three-day period in which he called her a whore and a slut and demanded she post videos of herself having sex. They were followed by a deeply unsatisfying statement that "my choice of words was not the best." Since then, the marketplace has asserted itself, American style, with both consumers and advertisers deciding what form of conversation they choose to support with their time and money.

Rush Limbaugh may still have a road-to-Damascus moment and express some genuine contrition for his three-day hate binge. But until that time, what we don't need is another smug, condescending, overpaid white dude telling us to accept a phony olive branch, suggesting that our disgust makes us "look bad."