Amid UND's Fighting Sioux controversy, it's time to debunk the arguments in favor of these offensive symbols 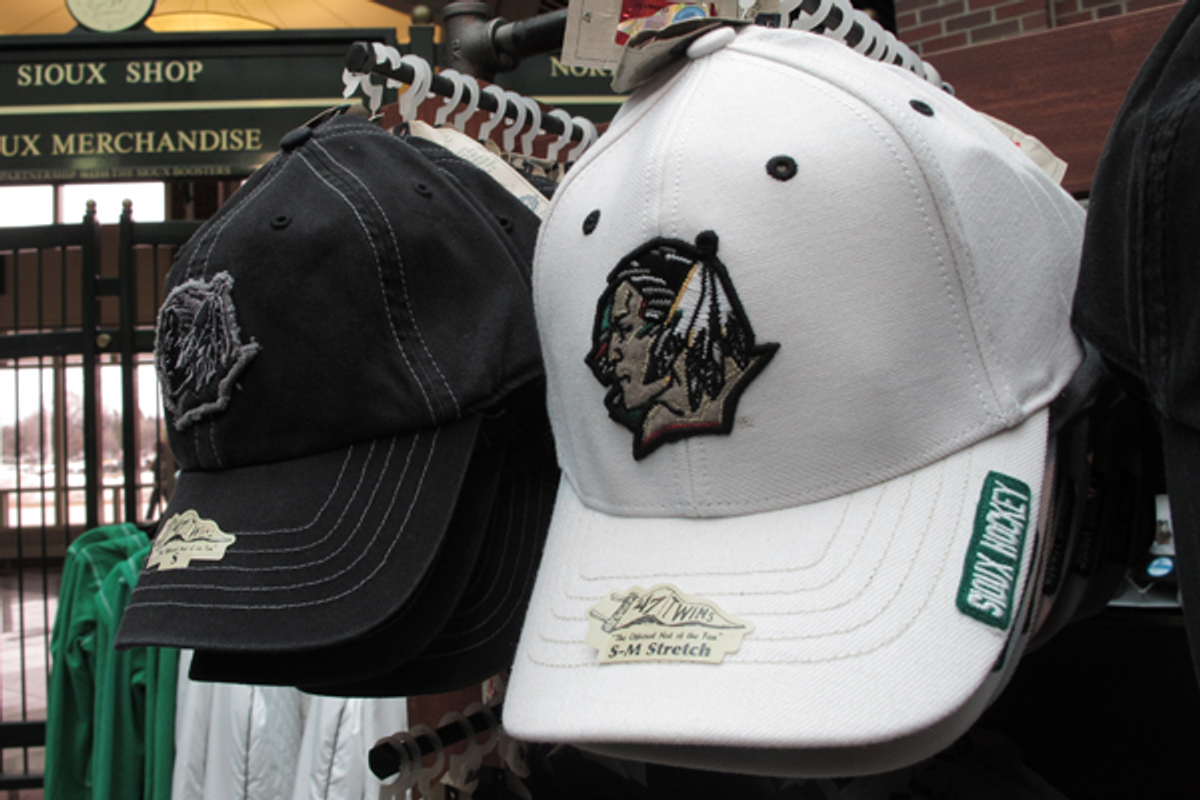 Is a mascot a clown that denigrates its subject? Or is a mascot a memorial that honors a heritage? How you answer this question likely reflects how you view the periodic conflagrations over sports teams that use ethnic identities as their preferred brand.

The latest of these battles is taking place at the University of North Dakota, where the National Collegiate Athletic Association (NCAA) is threatening to ban the school from participating in post-season athletics because its Fighting Sioux mascot violates the organization's rules against mascots "deemed hostile or abusive toward Native Americans." As the Associated Press reports, the struggle between the NCAA and the university reignited after, in an effort to help the school avoid sanctions, "a law requiring the school to use its longtime nickname and logo (was) repealed eight months after it took effect last year." However, "ardent nickname supporters filed petitions with more than 17,000 signatures demanding that the issue be put to a statewide vote" -- and those petitions put the law back in effect until state voters cast their ballots on the issue.

Native Network News notes that other schools with Native-American-themed names "including the Florida State Seminoles and the Central Michigan University Chippewas [have] avoided NCAA sanctions by gaining the support of area tribes in their states and continue to use their nicknames and imagery." However, the NCAA is swinging into action because "the University of North Dakota was unable to gain the support of all the Sioux tribes in North Dakota." Indeed, a number of tribal organizations in North Dakota have come out decisively against the Fighting Sioux iconography and survey data of students at UND -- which has a comparatively high Native American enrollment -- found that a "majority of Native American and a minority of white students thought that the nickname conveyed disrespect and argued for change." As the Iowa State Daily reports, "many of the American Indian students who attend the University of North Dakota have become increasingly frustrated with the mascot and want to see it removed."

"The passing of the law [forcing the school to have the mascot] infringes on [Native Americans'] right to a fair education and reinforces an unwanted stereotype, and the name [Fighting Sioux] gives people a chance to offend others," said UND professor of Indian Studies Sebastian Braun said.

Each of the three standard arguments used to brush off such substantive criticism is more inane than the next. Let's debunk them one at a time:

Nonsensical Argument #1: A mascot is designed to honor, not lampoon, an ethnicity

To know this is idiotic is to replace a Native American mascot with a caricatured mascot depicting another ethnic group -- and then ask if that would really be considered an honor. Would anyone seriously defend a team called the Boston Blacks or the New York Jews, each with mascots of ethnic stereotypes? Probably not (sure, Notre Dame's Fighting Irish embody a non-Native American cultural stereotype, but two wrongs don't make a right). Nobody would or should defend those hypothetical names because we know what a mascot really is -- we know its whole purpose is to draw attention through flamboyant spectacle. We also know, then, that when we turn an ethnicity into a mascot, we are not-so-subtly insinuating that the group is inherently an attention-grabbing spectacle of flamboyance -- that is, we are insinuating that its otherness is so alien, strange or ridiculous, that its people are fit to be presented as glorified clowns. That's not an honor -- that's an insult.

Nonetheless, the mascot-as-hero conceit is frequently trotted out by a majority culture desperate to continue the minstrelization of minorities via athletic logos. As the University of Akron's Dana M. Williams reports, surveys show that "one of the most common storylines about the (UND) nickname offered by white supporters is: 'It’s intended as an honor because Native people were brave fighters.'" To this, Williams offers a powerful rejoinder:

Such a claim minimizes the racism inherent in a predominantly white university using a discriminated-against racial minority as its sports nickname. The statement also reinforces the misleading stereotypes that all Native Americans were brave and were fighters, thereby making all Native people targets of an externally imposed “honor.” Ironically, in the past, attributing the label fighting to Native Americans would have been perceived as highly negative, and would have helped to justify attacks by the U.S. Army on Native Americans, as well as white settler incursions into Native territory.

Nonsensical Argument #2: These controversies are meaningless spats over differing consumer tastes -- those who don't like the mascots can just ignore them

Sounds nice and free-market-ish, but remember a key point: Unlike professional sports teams, which are merely publicly subsidized via stadium deals, tax exemptions, municipal security outlays and infrastructure support, many schools involved in these mascot controversies are publicly owned. So this is more than the question of whether, say, the names and mascots of the Washington Redskins, the Cleveland Indians or the Atlanta Braves are offensive (they are). Those team names represent business decisions by private institutions -- and yes, if you don't like those decisions then don't buy the product.

By contrast, the decision by a government-sponsored university to trot out an ethnicity as a mascot is a decision by a public agency, meaning this isn't just a flippant question of taste or opinion -- it's a question of what is acceptable state-sanctioned public policy in 21st century America. And since both state and federal taxpayer resources are behind those public policies, every taxpayer in this democracy has legitimate standing to question the use of those resources -- because you can't just decide to not financially support the particular team. Your tax dollars are going to it whether you like it or not -- and the way those taxpayer resources are used is essentially an official statement of our society's collective values.

Argument 3: Critics of these mascots are making a mountain out of a molehill -- it's just not that important

This is a very flippant rejoinder that those in the majority culture typically use to shut down a conversation. And it's quite convenient for them -- it's easy, after all, to insist something isn't important when it doesn't denigrate you personally.

Of course, the same exact argument could be flipped on its head: If, as proponents of these mascots suggest, it's not really important, then why not simply change every mascot to a non-offensive, non-human form and be just done with it? Why, if it's just a small issue, has this dominated North Dakota politics, to the point where bills are passing the state legislature and mass petitions for ballot initiative are being filed in support of the Fighting Sioux mascot?

Why? Because in reality, it's not a small issue -- it's a huge issue to both proponents and opponents of these mascots. On one side, majority (mostly white) culture wants to keep minorities in a position of denigrated inferiority -- and the mascot is one symbolic way to do that. On the other side, those being denigrated want to finally be treated with respect. As Tim Giago, the founder of the Native American Journalists Association, recently put it, they want our country to understand "that most Native Americans do not consider it an honor to be mimicked, insulted and demeaned by sports fans across America in the name of a high school, college or professional sports team mascot."

Thankfully, the NCAA rule against mascots "deemed hostile or abusive toward Native Americans" takes the latter's side, as it should. Whether the state of North Dakota -- and other institutions throughout society -- ultimately take the same position will tell us which value America holds more important: old-school bigotry or genuine respect for diversity.