Not that the contrived drama will actually end any time soon 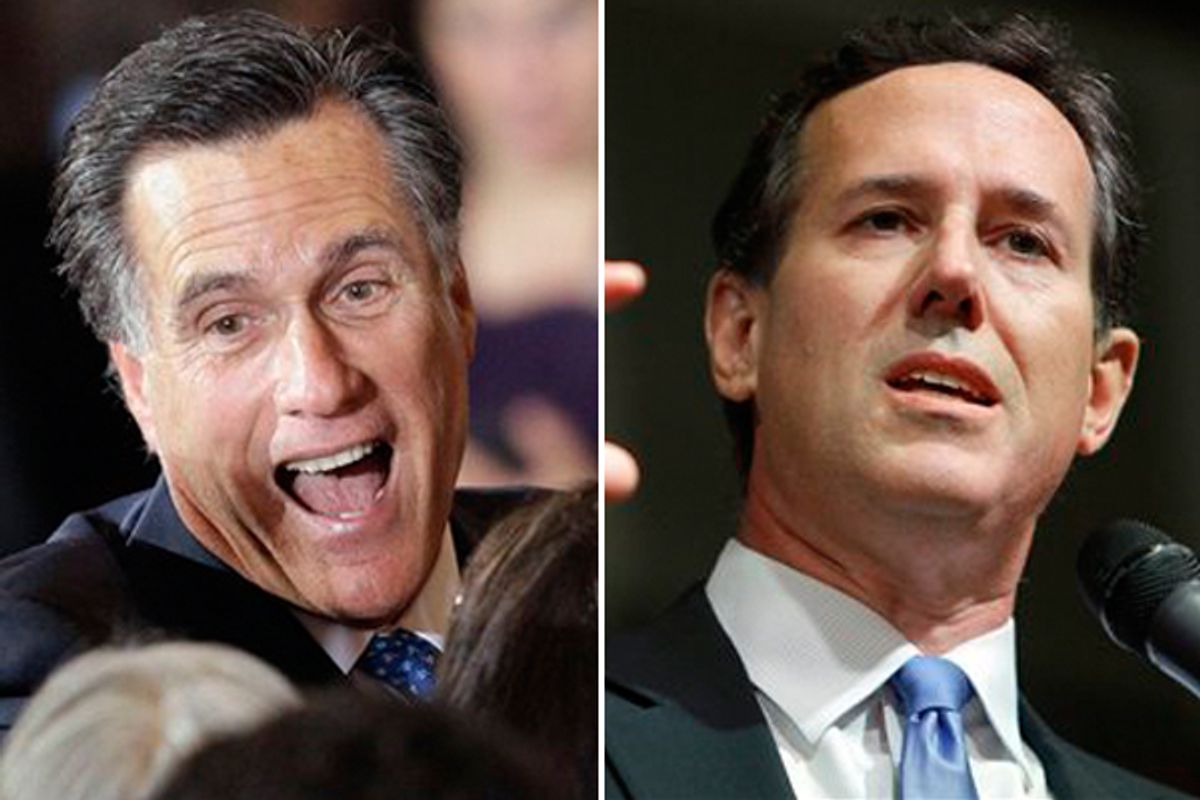 As could have been predicted shortly after he dropped out of the 2008 race, Mitt Romney is the likely 2012 Republican nominee for president. Because his wins in Massachusetts and Virginia were expected, the press downplayed the significance, but those states alone gave him 84 delegates. According to the AP's current total, Rick Santorum won 84 delegates altogether last night. It looked, for one entertaining hour, like Santorum might eke out a narrow Ohio victory, which would have been portrayed as a massive upset. Instead, Romney did so, and it was portrayed as a Pyrrhic victory. As Dave Weigel says, Romney won. It was, contra most pundits, a very good night for the guy who will almost certainly be the nominee barring stunning convention shenanigans.

Unfortunately for Mitt, as Steve writes, the immediate future will present more awful headlines and the race can't be wrapped up any time soon.

John Avlon says Romney can continue having victories like last night's and still not reach the magic number of 1,144, but there is no conceivable way Santorum or Gingrich ever reach that number, meaning right now the nation joins Romney in simply waiting for them to stop prolonging this.

So the question is, when will they stop prolonging this? It's fun to pretend that Gingrich and Santorum and Paul are too dedicated/crazy to ever let Romney have the nomination, but they are actually mostly rational actors. Newt Gingrich, the craziest, is going to stay in long enough to win the next couple of Southern states, but then he is going to run out of money. Paul isn't winning enough votes or delegates to matter, plus he's got his son's career to think of. Santorum is a party hack at heart and will not take this fight to a divided convention.

This could still conceivably go on through May; Santorum's Pennsylvania, with 72 delegates to award, doesn't vote until April 24 (on that same day Romney will likely win many more delegates in Connecticut, New York, Delaware and Rhode Island). The White House is praying it lasts until June (the "last in the nation" Utah primary is on June 26). But it should be done in time for the summer, and while Romney will have been financially and politically weakened by the fight, he'll still have the entire party apparatus closing in lockstep behind him because that is what they always do, even when they hate their nominee. (They hated John McCain, too!)

Current Santorum and Gingrich voters will support Romney in the fall, because he will be the Republican running against Obama. The "anyone but Romney" bloggers will support Romney. Fox will get very excited for him. George Will and Peggy Noonan will pseudo-reluctantly throw their support behind him for the good of the nation. Those evangelicals who don't trust Mormons will decide Mormons are at least better than Muslims.

There is the actual voting part of the race for the nomination, the media part of the campaign, and the party elite consensus part. There's a lot more voting to go, but Romney is winning. The press loves to cover a close race but they quickly turn on a lost cause who won't quit already. The party itself is almost finished settling.

The real scary news: Now Rick Santorum is the 2016 GOP nomination front-runner. (It's probably safe to say that the party will explore nomination rule changes between now and 2016.)