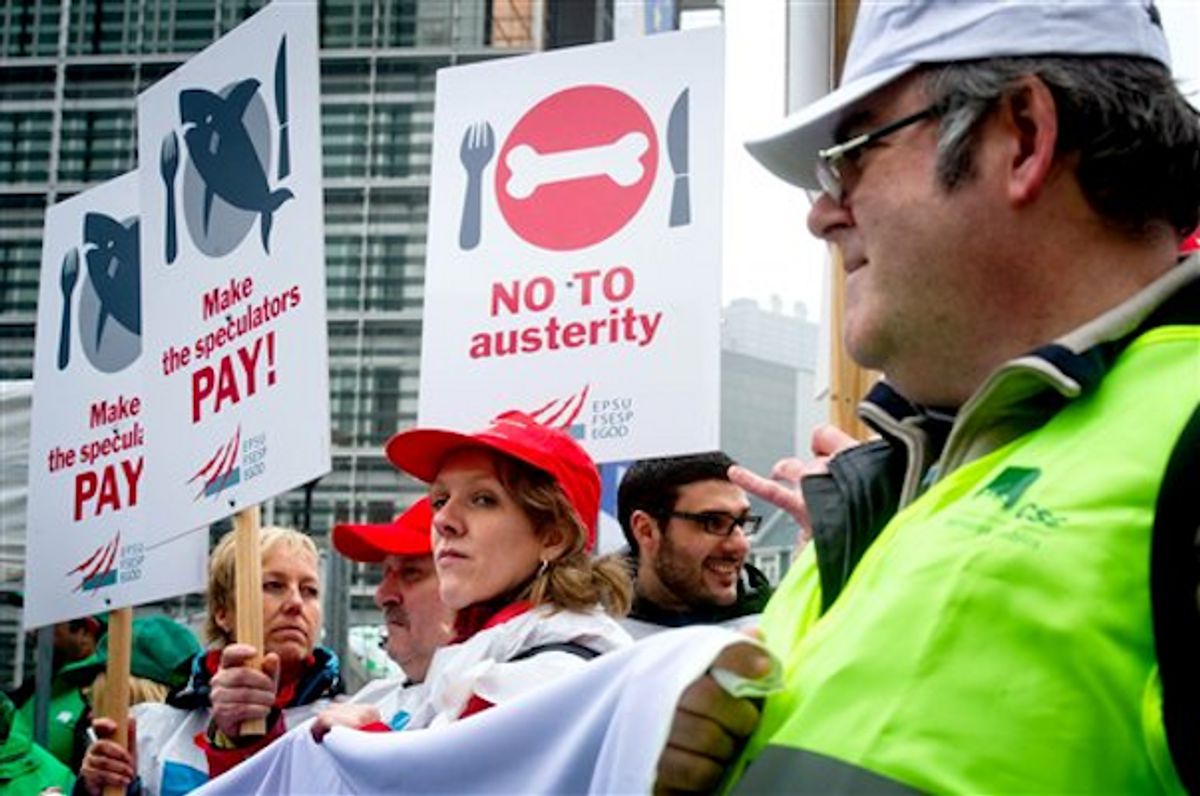 BERLIN, Germany — Europe is on the hunt for growth, but has little idea where to find it.

Many EU countries are being forced to follow a strict austerity path to slash their debts, but these measures seem to be sapping their ability to grow their economies and create jobs.

Some analysts warn that in the absence of measures to boost growth, more bailouts and debt write-downs could be in the cards.

The latest figures are certainly worrying.

The euro-zone economy contracted by 0.3 percent in the fourth quarter of 2011, the EU's statistics office Eurostat confirmed on Tuesday, and unemployment reached an average of 10.7 percent in January, the highest since the euro was introduced in 1999.

That figure masks the huge discrepancies within the bloc. For example, while Spain’s unemployment is now at 22.9 percent, Austria’s is only 4 percent.

Most attention recently has focused on the drama in Greece, which has required a second bailout in two years to keep from defaulting on its debts.

The embattled country has been prescribed severe austerity in recent years to tackle its alarming public debt mountain, yet the medicine seems to be killing the patient. The Greek economy shrank by 6.8 percent in 2011. The bulk of the new 130 billion euro ($172 billion) bailout will go to lenders rather than being used for any measures to boost growth.

The Greeks are not alone. Ireland and Portugal, the other two recipients of bailouts from the troika of the European Central Bank, the European Union and the International Monetary Fund, have also had to sign up to reforms and punishing public-spending cuts as a condition for the funding.

Portugal in particular is struggling to find growth prospects. Last week, Finance Minister Vitor Gaspar announced that the economy is now expected to contract by 3.3 percent this year, instead of the previous forecast of 3 percent. Unemployment has soared to over 14 percent and the government is even encouraging people to emigrate. Last week President Anibal Cavaco Silva called on the government not to impose yet more austerity on the country’s “new poor.”

And even the austerity drive may not be achieving the government’s aims. Borrowing costs are still prohibitive at 13.07 percent, and Standard & Poor's recently reduced the country’s rating to junk. “Portugal is doing the best it can to spread the message that we are not Greece, that we are implementing reforms,” said Luis Faria, director of the Lisbon-based Contraditorio think-tank. “But the market is still waiting for credible signals.”

Although Lisbon has managed to cut the deficit from 9.1 percent in 2010 to 5.6 percent last year, that is largely on the back of one-off measures such as transferring banks’ pension funds to the state, says Faria.

He argues that Lisbon will not be able to return to the bond markets any time soon. “It seems obvious now that either another bailout will be negotiated or orderly default will be the solution.”

Meanwhile, Ireland may be the poster boy for European austerity, even managing to see a slight growth of 0.9 percent last year after three years of contraction.

Yet it too is suffering from the negative consequences of austerity. Businesses are struggling and the unemployment figure has soared to over 14 percent, and would probably be higher if it were not for emigration. And while exports have driven the recovery, the rest of the economy is extremely sluggish.

“The prospects are quite poor for Ireland,” said Tom O’Donnell of the TASC think-tank, based in Dublin. “I don't think it's accurate to say that we are a successful example of austerity. Austerity has been very damaging, in terms of growth and demand.”

Particularly galling for the Irish is that the punishing cuts and tax hikes are required in large part to pay off the colossal debts of reckless banks who bet on the country’s massive property bubble. The Irish government is currently committed to paying 3 billion euros a year for the next 15 years to the unsecured bondholders of the worst offender, Anglo Irish Bank — a massive burden on such a small country.

With the economy only expected to grow by 0.5 percent this year, the prospects of returning to the bond markets in 2013 are fragile, something acknowledged by the IMF only last week.

O’Donnell says that many economists believe that Ireland will probably require a second bailout, which would be under the auspices of the European Safety Mechanism, the new rescue fund. That may well be a consideration for Irish voters who face a referendum on the fiscal pact, as its ratification is a precondition for the rescue fund's support.