He schooled Netanyahu, made the GOP warmongers look like idiots, and weakened the Israel lobby 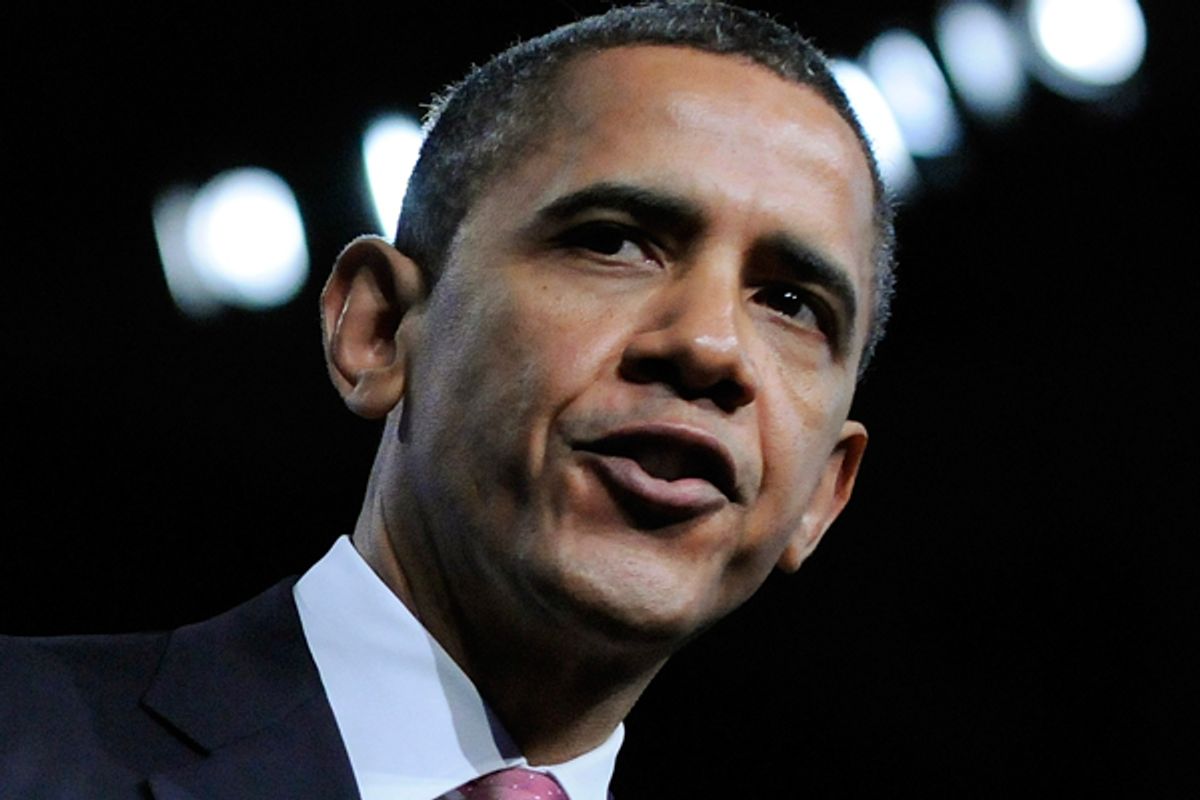 Presiden Obama gives a speech at the AIPAC conference in Washington on March 4. (Reuters/Jonathan Ernst)
--

President Obama just gave Israeli Prime Minister Benjamin Netanyahu a serious whupping. In the process, he greatly reduced the risk of a catastrophic war, made his saber-rattling Republican opponents look like idiots, and seriously weakened the powerful Israel lobby. And he did it all while pledging undying support for Israel. It was a virtuoso display of political judo.

This year the stakes were higher than ever. Netanyahu and the Israel lobby, of which AIPAC is the biggest and most formidable arm, were beating the drums for war with Iran. AIPAC had already successfully lobbied for a draconian and ineffective sanctions bill, opposed by Obama, which resulted in a 13 percent spike in gas prices, to their highest ever at this time of the year. The Senate passed the bill 100-0. With hypocrisy that would be breathtaking if it weren’t an everyday event, Obama’s warmongering GOP opponents seized upon the high gas prices to attack Obama.

The Republican strategy was to paint him as an insufficiently ardent supporter of Israel (notwithstanding the fact that he had quietly accepted repeated humiliations by Netanyahu, completely abandoned the Palestinian issue, and gave Israel everything it wanted every time it asked, including vetoing a U.N. resolution condemning Israeli settlements that simply repeated an official U.S. position) and a cowardly appeaser on Iran. By so doing, they hoped to peel away crucial Jewish votes in swing states like Florida, and dry up the vast campaign contributions (by some estimates as much as half) made by Jews to the Democratic Party.

Obama had to thread the needle. He, along with America’s military and intelligence agencies, knew that a war with Iran would have catastrophic consequences for the U.S. and the world. But he could not say that explicitly.

He had to engage instead in a kind of Kabuki dance, making just enough warlike gestures to placate Israel’s supporters while furtively signaling, with almost imperceptible movements, that he meant the exact opposite.

The first step was to stake out the most aggressive possible position on Iran, short of actual war. He chose the recipient of this message carefully: Jeffrey Goldberg, a hawkish mainstream journalist with credibility among Obama’s target audience, right-leaning Democratic American Jews. Making like Dirty Harry and saying, “I don’t bluff,” Obama told Goldberg that preventing Iran from developing a nuclear bomb was not only in Israel’s interest, but in America’s. He then laid out the usual reasons: Iran might give the bomb to terrorists, it would feel emboldened to make trouble, and its possession of the bomb would spur a destabilizing arms race.

Whether or not Obama actually believed what he told Goldberg is unclear. (In fact, the arguments he used are weak and unconvincing, as this definitive piece by Paul Pillar shows.) But that was irrelevant, because Obama had and has no intention of starting a war with Iran. All that was necessary was that he cover his flank with Israel’s amen corner.

Then Obama had to meet with Netanyahu. This could not have been pleasant. The two men do not like each other. Obama knew that the far-right Israeli leader wants to see a Republican elected president. He was forced to watch helplessly as Netanyahu went behind his back to Congress, garnering endless standing ovations in a display so egregious that it led the ultimate establishment columnist, the Times’ Thomas Friedman, to use the expression “the Israel lobby” – vindicating the courageous academics John Mearsheimer and Stephen Walt, who a few years earlier were smeared as anti-Semites for using the same expression. But Obama played his role flawlessly, making all the right noises about America’s undying support for Israel – even using the folksy “we’ve got your back” – while quietly rejecting Netanyahu’s demand that America abandon diplomacy and attack Iran.

But it was in his press conference after addressing AIPAC that Obama demonstrated his mastery of political judo. By attacking those who were “beating the drums of war,” he simultaneously painted his GOP rivals as irresponsible lightweights and fired a warning shot across Netanyahu’s bow.

Even more significant was his statement, “It’s also not just an issue of consequences for Israel if action is taken prematurely. There are consequences to the United States as well.” By drawing a subtle but clear distinction between Israel and the United States, Obama threw down the gantlet to Netanyahu and to his American supporters: If Israel attacks Iran, the United States is not going to fall on its sword for you. It isn’t going to be 1973, when we came riding to your rescue, or your 2008 slaughter in Gaza, which we ignored. It’s going to be Suez in 1956. And you aren’t going to like it.

Obama felt emboldened to confront Israel and its American supporters for three reasons. First and foremost, he knew Americans do not want another ruinous Mideast war. Second, he correctly assessed that most American Jews would vote for him and continue to give him money even if he refused to be Netanyahu’s hand puppet. And third, by turning the war into a partisan issue, Netanyahu and the Israel lobby left Obama no choice but to punch back. And once he did, he fundamentally shifted the terms of the debate.

It’s hard to say whether Netanyahu, the GOP or the Israel lobby is the biggest loser here. Netanyahu might be. As Aluf Benn, editor of the Israeli newspaper Ha’aretz noted, by invoking Auschwitz, Netanyahu moved closer than ever before to committing himself to attacking Iran. But because Obama outmuscled him, Netanyahu now faces an excruciating choice: do nothing and stand revealed as a Neville Chamberlain, or attack Iran and risk destroying the “special relationship” with America that is Israel’s strategic cornerstone. The true significance of Obama’s subtle marginalizing of the Israel lobby is that it puts enormous pressure on Netanyahu not to attack.

The GOP is not feeling too chipper today either. Normally, the War Party could count on there being no downside to urging war, especially if it involved “defending” Israel. But Iraq and Afghanistan have changed that. The American people have no stomach to fight yet another war in the Middle East. And they definitely have no stomach to fight a war for Israel.

Which takes us to the lobby. By demanding a war with Iran that Israel wants, and that President Obama and the American people do not, it committed the two unforgivable sins: It made it clear that Israel and America’s interests do not always coincide, and it took Israel’s side over America’s. That was bad enough, and the embrace of the GOP’s dreadful candidates was the final straw. AIPAC and the rest of the Israel lobby are now locked in a steamy ménage a trois with Netanyahu and the GOP. For Democrats, proponents of peace, and those who desire justice in the Middle East, it’s a match made in heaven.