Will "John Carter" rank among the all-time bombs?

Disney bet $250 million on an unproven star and a century-old western set on Mars. And it almost pays off 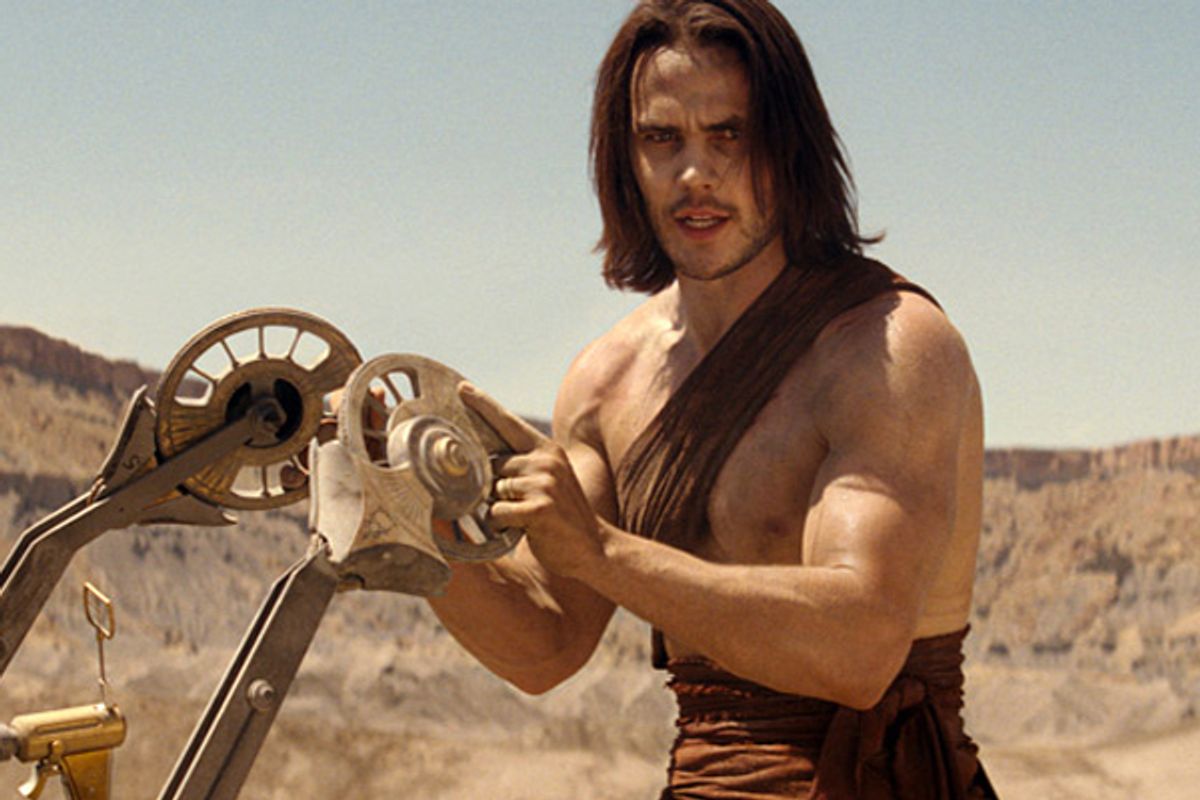 In considering the fate of "John Carter," the Disney studio's $250 million gamble on a Wild-West-goes-to-outer-space yarn that's 100 years old, it's tempting to observe that two of the biggest box-office bombs in recent Hollywood history have been movies set on Mars. With little sense that the barrage of worldwide publicity has built up much public appetite for "John Carter," is the Mouse prepared for No. 3?

You can't say Disney wasn't warned. One of those Martian elephant eggs was a quite recent Disney film, one the studio and the rest of us have done a good job forgetting. The execrable anti-feminist animated nightmare "Mars Needs Moms" came and went without much fuss a year ago, but viewed through a long lens it looks like one of the biggest disasters in film-industry history, piling up net losses in the ballpark of $140 million. The difference may have been that by the time "Mars Needs Moms" was released, Disney knew it was a turkey. Even at this writing, nobody knows quite what to expect from "John Carter," a long-long-brewing Edgar Rice Burroughs adaptation that marks the live-action directing debut of Pixar's Andrew Stanton, director of "WALL-E" and "Finding Nemo."

My verdict is that while "John Carter" may well go down in history as a great folly, it's no "Mars Needs Women." (Nor is it the misbegotten 2000 adventure flick "Red Planet," with Val Kilmer and Carrie-Anne Moss, which reportedly cost $100 million to make and earned back about a third of that.) It's a profoundly flawed film, and arguably a terrible one on various levels. But if you're willing to suspend not just disbelief but also all considerations of logic and intelligence and narrative coherence, it's also a rip-roaring, fun adventure, fatefully balanced between high camp and boyish seriousness at almost every second. Stanton even makes a case, of sorts, for the relevance of the Carter yarns, which were pretty nearly the first American science fiction and prefigured so much that would come later, from Robert Heinlein to Ray Bradbury to "Planet of the Apes" to "Star Wars" to "Avatar." Whether there's anywhere near enough mass interest in this antediluvian franchise to turn it into a 21st-century hit, well, I'm afraid that's quite another story.

One might almost compare "John Carter" to Brian De Palma's "Mission to Mars," even though the films are quite different in stylistic and generic terms. Both are sumptuous, grandiose and profoundly silly spectacles, liable to inspire over-the-top flames from some viewers and impassioned defenses from others. At this point Disney would probably accept a similar outcome with gratitude; while "Mission to Mars" was one of the worst-reviewed movies of the 2000s (at least in the United States), it came close to breaking even overall.

Filmmakers have eyed Burroughs' series of novels about John Carter -- a former Confederate cavalryman turned Western adventurer who is thrown into the three-way civil war waging on Mars (sorry, "Barsoom") -- as potential material since at least the 1930s. You have to admire Stanton for wading so confidently into that long history of failure, talking big about spinning this unknown hero and his unproven star (Taylor Kitsch, of TV's "Friday Night Lights") into a three-film franchise. He signed up novelist and pulp aficionado Michael Chabon to rewrite the screenplay, perhaps to lend the project some geek authenticity. I think that's cool and all -- but A) there's no way to make Edgar Rice Burroughs not seem silly, and B) seriously, who's going to care? Are there legions of Burroughs buffs out there demanding fealty to the text of "A Princess of Mars"?

Indeed, that's my mystified reaction to "John Carter" in general: So, the "WALL-E" guy has made an immensely expensive special-effects movie that combines a western and a sword-and-sandal epic and a proto-steampunk action-adventure, and is set on Mars. That's kind of interesting! But what the hell were they thinking? It doesn't help that "John Carter" gets off to a slow and murky start, lurching back and forth between the digitally created "predator city of Zodanga," which is bent on conquering all of Mars, and our eponymous hero pursued through the rainy streets of Manhattan, circa 1881. That narrative encloses another one, when Carter dies suddenly and leaves his nephew, Edgar "Ned" Burroughs (Daryl Sabara), his private journal, and then two more, when the journal reveals how Carter discovered a mysterious cave years earlier in the Arizona Territory and was thence teleported into a new life on another world.

Things pick up considerably once Carter -- played by the muscular, long-haired Kitsch with a persistent wise-ass smirk that somehow isn't obnoxious -- reaches the surface of Barsoom and is captured by the Tharks, a violent but noble race of 9-foot-tall, six-limbed aliens with walrus tusks and a vaguely Christian mythology. It's a little bit "Avatar" and a little bit "Planet of the Apes" and a little bit "Man Called Horse" and even a little bit "Tarzan," and yes, I know that the Carter franchise predates all of those (even Tarzan, whom Burroughs invented after Carter). Possessed of godlike superpowers in the lower Martian gravity, Carter bounds around in obviously fake fashion, rescuing the sultry and nubile Dejah Thoris (Lynn Collins), princess of the besieged city of Helium, who is supposed to be a scientific genius but spends most of her screen time looking bodacious in increasingly skimpy Barsoomian fashions. Yeah, the warring humanoid city-states of Mars are called Helium and Zodanga. I giggled too. Burroughs established an all-time low in dopey science-fiction names, pretty much at the moment of the genre's creation.

There's one-on-one gladiatorial combat and big, chaotic battle sequences and an incomprehensible plot involving the vicious and stupid prince of Zodanga (Dominic West), who's being manipulated by three immortal guys in robes (led by the always excellent English actor Mark Strong) who claim not to give a damn about anything but also seem to feed off planetary destruction. Or something. Zodanga! Playing the ruler of Helium and father of Dejah Thoris, Irish actor Ciarán Hinds gets to wear the most awesome military uniform I've ever seen, which appears to have been jointly designed by Julius Caesar, George Washington, Idi Amin and Karl Lagerfeld. (Sacha Baron Cohen's fictional Arab dictator can eat his heart out.) At its best, "John Carter" is a mightily impressive spectacle, cleanly photographed in dusty reds and brilliant blues by Daniel Mindel, which dares to straddle that elusive boundary between awfulness and wonderfulness. It's awfully wonderful, or wonderfully awful.

As so often with big, expensive Hollywood disasters, the real problem with "John Carter" is tone. Can you think about "Battlefield Earth" or "Ishtar" or "Waterworld" or "The Adventures of Pluto Nash" -- with a net loss amounting to 94 percent of its production cost, pretty much the all-time dog -- without laughing? Big movies fail when those who make them lose all perspective on how to make them and whom they're making them for -- when they strike a tone that's completely misguided, and often unintentionally hilarious. You can feel Stanton struggling to bring the confidence, wit and style of "Wall-E" and "Finding Nemo" to bear upon this leviathan, but he can't quite pull it off. Whatever tone he's trying to impart gets eaten by the pure bigness of the project, and you're never sure whether he's embracing this ludicrous, antiquated fable of a pioneer American on Mars, or making fun of it. You could argue that that ambivalence is interesting on some intellectual level, sure. But from a commercial point of view it's contagious, and likely to be fatal. Don't buy your ticket for the sequel quite yet.