As more and more states turn to legal betting to fight the Great Recession, a metaphor becomes reality 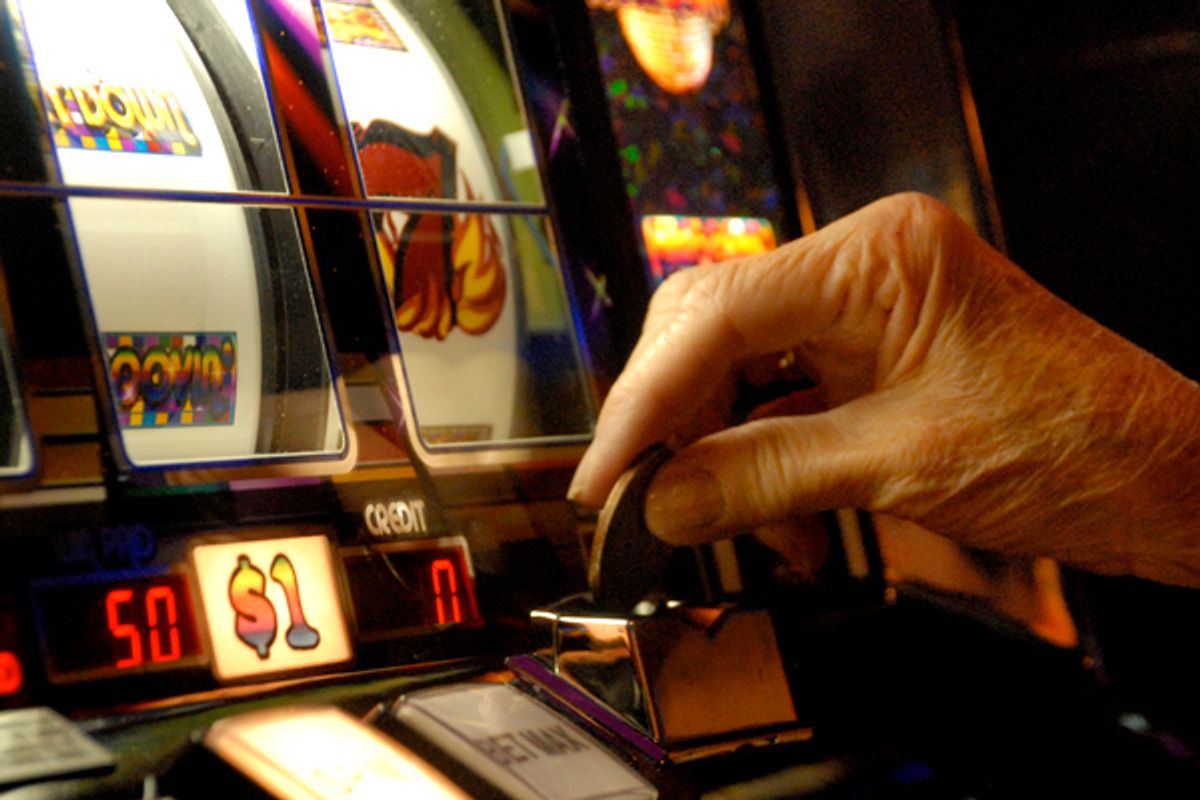 Though Wall Street's brand of “casino capitalism” crashed the American economy in 2008, American capitalists are making a growing profit from real-life casino gambling: commercial (or non-Indian)  casinos have generated nearly $98 billion since 2008, including  $34.6 billion in gross revenues in 2010 (the last year for which data is available), up from $20 billion in 1998.  That's more than three times the sum Americans spend on movie tickets. And only $5.7 billion was generated in Las Vegas. The fantastical upside-down world of American commerce long confined to Nevada and Atlantic City, N.J., is now ubiquitous.

The billions of new dollars spent at casinos represent a net transfer of wealth to big business and to pay workers whose labor is not as productive as, say, repairing the nation's crumbling infrastructure. Casino capitalism is an apt metaphor exactly because — whatever one might think about legalized gambling — it is not generally perceived as a sound operating principle for the entire economy. Yet the steady march of casino gambling now sketches an eerie facsimile of our political economy writ large. In fact, casinos thrive amid economic misery.

Industry leaders tout casinos as a tool for creating jobs and increasing revenue, and recession-weary politicians are listening.

“When you're in recession, what that normally means is that state government suffers with regard to the revenue they have available to fund public services,” says Frank Fahrenkopf,  CEO of the American Gaming Association, the industry trade group. “When the state legislature needs revenue, this has proven over the years to be a very successful way to bring in capital investment, economic development, jobs, and tax revenue.”

The United States has since the early 1990s undergone a piecemeal but profound social and economic transformation: casinos, nearly prohibited nationwide in 1910, are now legal in some form in 40 states, including 24 with legalized commercial operations. The companies involved make a tidy profit: Of the $34.6 billion in revenue (and again, this figure is in addition to the $26.7 billion generated at the nation's 448 tribal casinos), casinos paid just $7.59 billion in taxes and $13.3 billion in wages and benefits.

With budgets tight, “the governor will get the bright idea that he can open casinos and then not have to raise taxes,” says Earl Grinols, a Baylor University economics professor and gambling critic. “We have a new round of expansion in New York, in Pennsylvania, in Massachusetts. The industry uses every recession as an opportunity for expansion.”

In Illinois, Chicago Mayor Rahm Emanuel is pressing for a casino to make up for a budget shortfall. In Detroit, which continues its slide into oblivion, casinos grossed $1.378 billion in revenue. In Pennsylvania's Lehigh Valley, a new Sands casino opened in 2009 at the site of the shuttered Bethlehem Steel mill. Though the casino won't come close to replacing Bethlehem's 31,523 unionized steel jobs, residents of the depressed city packed the casino on opening day to revel in the possibility of revival.

Many gamblers end up unlucky, and much of the casino debate has hinged on the question of social costs: whether casinos cause more crime and create more gambling addicts.

“The social costs clearly outweigh the social benefits,” says professor Grinols. “The only people who benefit from casinos are the owners.”

Pennsylvania's I-95 corridor is now crowded with gambling houses: Parx casino in Bensalem, SugarHouse on Philadelphia's Delaware River waterfront, and Harrah's in Chester, where the school district is virtually bankrupt. Harrah's general manager said the customers in its database visit the casino an average of 4.5 times a week, while the state's news media have fixated on the troubling trend of parents  leaving their children locked in parked cars when gambling in Bensalem.

A significant portion of gambling revenues — one-third to one-half — is derived from problem gamblers, says Grinols, who, in a 2006 Review of Economics and Statistics article concluded that 8 percent of crime in casino counties can be attributed to the presence of legal gambling.

But Fahrenkopf, a lawyer and former chairman of the Republican National Committee, says that Grinols and allied academics rely on flawed data. “They no longer argue the morality of gaming, because the American people are way past that. So they argue about social costs,” says Fahrenkopf. “As my old boss Ronald Reagan used to say with regard to the Russians: trust but verify.”

Indeed, the literature is conflicted. Some academics, like Harvard Medical School's Howard Schaffer, say that the number of gambling addicts has not increased alongside casino expansion. Douglas Walker, a professor of economics at the College of Charleston, has criticized Grinol's methodology in studying casino-related crime.

But the larger problem is indisputable: The growth of the gambling industry feeds on America's job insecurity; people, whether gambling or seeking employment, have fewer viable ways to make good money. As the country has deindustrialized since the 1980s, and unions have been marginalized, real wages stagnated and then declined. At the same time, a deregulated and ascendent financial sector offered easier-than-ever credit cards and home mortgages, leading Americans desperate to maintain their lifestyle deep into debt.

Sociologists Kevin Leicht and Scott Fitzgerald have dubbed these people “postindustrial peasants,” tied to debt — from subprime mortgages to the high-on-student debt but low-on- job-prospects for-profit colleges — in the manner their agrarian forebears were tied to land. Meanwhile, the poor depend on an array of “alternative” and usurious financial services like pawn shops, payday lenders and check-cashing stores to stay afloat.

"At the same time that work has become less secure, there has also been this massive move to privatize the financing system for the two traditional mechanisms of economic mobility: homeownership and education. All these industries have grown by trading on people's efforts -- sometimes concerted, sometimes desperate -- to get ahead in a world where opportunities in the labor market are hard to come by,” says Adam Goldstein, a doctoral student at the University of California, Berkeley, who studies the financialization of the American economy (and a friend).

When it comes to the real economy, legal gambling has the same limitation as Wall Street speculation: It doesn't make tangible things that we need or foster broad-based prosperity.

In fact, the gaming economy may be reaching its outer limits, as new casinos cannibalize revenue from preexisting operations. In Atlantic City, casinos have experienced a $1.6 billion decline in revenue and hemorrhaged more than 96,000 jobs since Pennsylvania opened its first casino in 2006. The depressed business reduces the tax revenue generated for desperate state coffers and prompt government to take ever more desperate measures. The $2.4 billion Revel, Atlantic City's newest resort and casino slated to open in May, was only completed after Gov. Chris Christie delivered a $261 million tax credit to the project.

The American Gaming Association, says Fahrenkopf, does not get involved in statehouse debates because they so often pit his members against one another.

In states that legalize gambling, casinos no doubt create jobs but they don't necessarily stimulate the larger economy. A 1999 report by the National Gambling Impact Study Commission found that “few businesses can be found more than a few blocks from the Atlantic City boardwalk. Many of the 'local' businesses remaining are pawnshops, cash-for-gold stores and discount outlets. One witness noted that, 'in 1978 [the year the first casino opened], there were 311 taverns and restaurants in Atlantic City. Nineteen years later, only 66 remained, despite the promise that gaming would be good for the city’s own.'”

The destruction of Main Street America in the age of Wal-Mart cannot, of course, be blamed entirely on casinos.

“You always get that sort of thing, and it's not only in this industry,” says Fahrenkopf. “When a new mall is coming into a community, it's going to have chain shoe stores, chain restaurants. The small town businesses are going to face the same -- I don't know if you want to call it capitalism — the same free market challenge.”

Casino jobs are comparable to those created throughout the American service economy: They are no replacement for vanished manufacturing employment, and wages can be quite low if unions don't fight their way into the picture. In Las Vegas, Culinary Workers Local 226 (part of UNITE HERE) has organized 60,000 casino and hospitality workers, boosting wages and benefits far above those that prevail in non-union Reno. But Atlantic City's downward spiral shows the fragility of labor success in the service economy. Most of the 5,500 permanent employees at the Revel will, in a first for the heavily unionized boardwalk, have to reapply for their jobs every four to six years.

Likewise, the prospect of casinos driving net job growth nationwide seems unlikely. While commercial casino revenues nationwide have increased by 73 percent since 1998, employment grew by just 5 percent, or 15,132 jobs, to 340,564. In New England, Massachusetts, Connecticut, Maine and Rhode Island are rushing to expand casino gambling and outcompete their neighbors. But as casinos expand, new profits are by-and-large net transfers to casino magnates who, flush with cash, leverage political muscle at the statehouse. In New York, Malaysian billionaire KT Lim, chairman of gambling empire Genting Berhad, has poured a large but undisclosed sum into a high-end lobbying operation to expand gambling in New York with the goal of remaking the “racino” at the Aqueduct Racetrack in Queens into a multibillion-dollar casino resort and conference center.

In Florida, legislation to legalize casinos was last month defeated in large part because of Disney World's behemoth opposition: Their lucrative version of tourism is based on a “family friendly” brand. The political viability of casino gambling may be determined less by popular will and more by the balance of power between moneyed interests in any given state. In New York, major business groups like the Partnership for New York City, the Committee to Save New York, the Business Council of New York State — and, now, decisively and after long-running opposition, magnate Mayor Michael Bloomberg — support the legislation. Meanwhile, racetrack owners in New York and other states are scrambling to obtain a monopoly on expanded gambling.

The expansion of casino gambling can engender fierce opposition. And it can make for strange political bedfellows too, as progressive social justice advocates and Christian anti-gambling moralists join forces. In Philadelphia, activists organized a diverse, if ultimately unsuccessful, citywide movement against SugarHouse. But other neighbors welcome the casino and the largess they deliver via “community benefit agreements” through which casinos pay for school books, libraries and programs for senior citizens and veterans. Functions that in the past were expected from government are now delivered by corporations under a halo of philanthropic beneficence.

The limits of casino capitalism are nowhere more evident than in the birthplace of legal gambling in America: Las Vegas. Wall Street investment fueled the rise of modern Las Vegas casinos. In the 1980s, Steve Wynn was the first casino magnate to fund the construction of a new casino through Wall Street-issued junk bonds, displacing the mafia as legalized gambling's patron of first resort.  Wall Street also funded Las Vegas' meteoric housing boom, which has ended in one of the country's largest busts: housing prices in the city more than doubled between 2000 and 2006. When the bubble burst, Las Vegas spent 22 months as the nation's foreclosure capital.

And so casino capitalism spreads relentlessly even after Las Vegas, the brightly lit neon dream of a post-industrial America, has come crashing down.