"None of you are getting out of here"

I was working at the Fukushima plant when the earthquake hit. I thought we'd seen the worst. Then came the tsunami 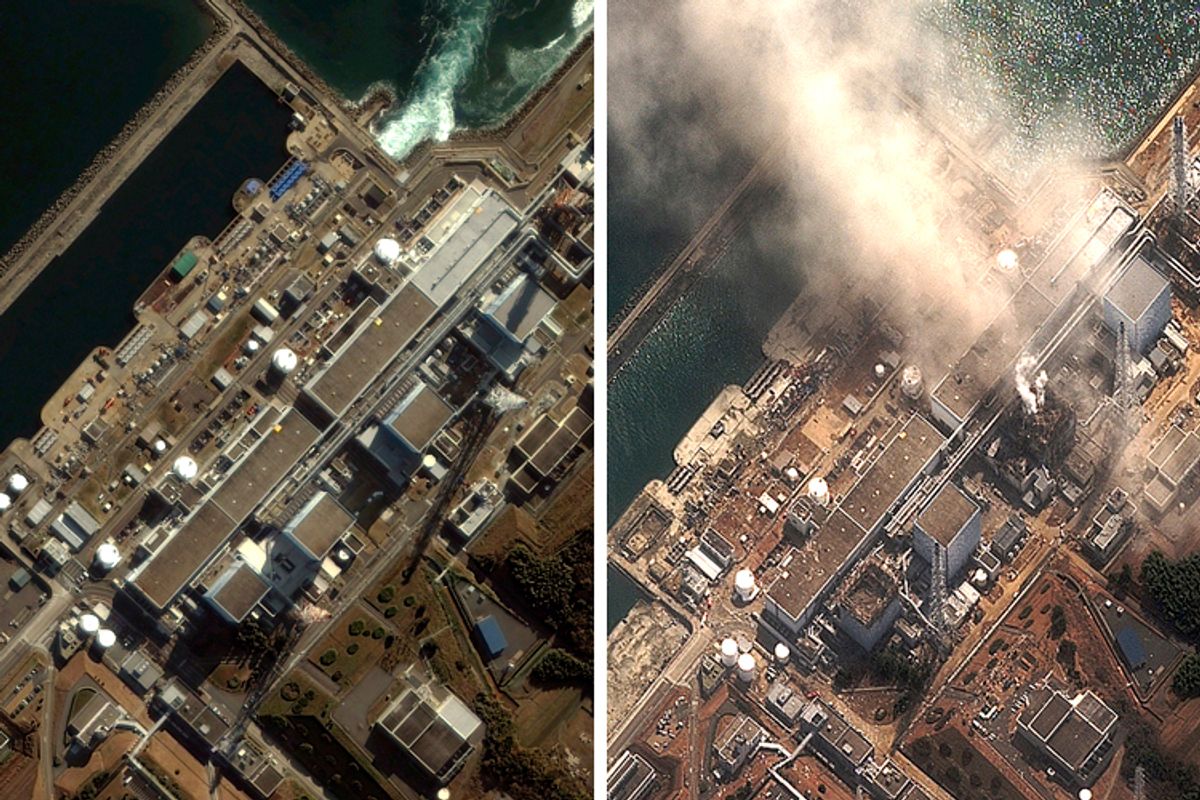 When the earthquake shook northeast Japan last March, Carl Pillitteri was leading a team of technicians in the Fukushima Daiichi Nuclear Power Plant. Pillitteri eventually led his team out of the building and retreated to a hillside where he saw the approaching tsunami slam about 100 feet from him. He was one of some 40 Americans working at the plant that day, and he spoke exclusively in this interview with Alex Chadwick, featured here as part of Salon's partnership with the APM radio show, "The Story." You can listen to the full audio interview here. It is also part of the radio documentary series "Burn: An Energy Journal."

I still remember it. The first shock of it. It was just one big hammer.

I turned to my two American friends Danny and Jeff and said, "Earthquake." They didn't feel it. They looked at me, and cocked their heads a little bit. And then she hit. We were in a turbine building that is built, for lack of a better term, like Fort Knox. The entire building was shaking.

None of us fell. But everyone got up against a wall, or got up on something. I heard that this earthquake lasted six minutes. But for me, it felt like a lifetime. I'm still living it, 10 months later.

I was working in a contaminated zone. I've been working in the nuclear field since 1984, and I've always followed good radiological practices. You step in properly. You step out properly. But when the earthquake ramped up, for the first time in my career, I lifted my one leg up and over that boundary and landed my dirty foot on the clean floor. We don't even hand things across this boundary. Here I am putting my leg over it. And I put my other leg over and I told the guys, "Let's get out."

You could feel it under your feet. It was this entire enormous building moving at once. A lot of things were falling. We lost almost every light in the room. The structural steel was moving overhead. The lights were crashing everywhere. There was one young Japanese boy in front of me, still dressed out, and I was coaxing him out and this light came down like a guillotine right next to him. I didn't know how to say "Look up!" or "Heads up" in Japanese. I wish I did. I was doing my best through charades to tell him, keep your eyes up. Everything was coming down. Thank God this boy didn't get struck by this light fixture. Because even a light fixture will clean your clock. Or worse.

The crane operator was the toughest one to watch. But I had to keep an eye on him because this crane was just crabbing and jumping. He kept getting up off his chair -- putting one leg out of the chair and putting it back in, and I'm thinking, please, please don't even attempt to get out of there. But I was more in fear of the crane coming down. He had to be a good 30-40 feet up in that cab. It's a crane that travels the entire length of the turbine deck. He would have put a champion bull rider to shame.

In one nanosecond, the entire floor went black. Every light went out. You would expect some emergency lighting would come on, but there wasn't a one. And there was this most welcome beam of white light coming from the gap under the door. I made my way over to the door, and the one and only light in the room, it was swinging violently and then at the same time I opened the door it busted free and shattered on the floor. It was pitch black again. I remember thinking, "None of you are getting out of here."

One of the Japanese guys had grabbed me around the waist. I put my arm up on his shoulder. With every jolt I squeezed his shoulder. I remember praying aloud for him, for all of us. I thought, we're going to perish in this turbine building. I can still hear the turbine making its most unwelcome sound. I had many thoughts. But one of them was: Good God. I got up this morning just to go to work. And this is how it's written for me? Dying is a fact of life. We all have to do it sooner or later. But this is how it's written for me? March 11? On a Friday? On a turbine deck? In Fukushima? At work?  Of course my thoughts went immediately to my family. My two young children.

But then the lights did come back on. The lights were not emergency lights, they were what remained of the lights that didn't fall. They were peppered about. There were maybe 60 lights on that deck and maybe four came on. It was enough light to see again. I took a look around the deck there. I've passed this thing 100 times and never noticed it. But it was an aluminum extension ladder. The most welcome sight I'd ever seen. Because the power was out, the crane isn't working. This guy can't drive the crane over to its docking station and get out. Thank God. We got him out of the crane.

After we all got out, I was headed toward my rental car. Then I saw the tsunami coming. I stood there and as it came in I thought, you gotta be kidding me. This thing was huge.

When I first saw it, I saw it as far north and as far south as you could look. It didn't resemble a wave. It resembled this huge swell of the ocean. This huge hump in the ocean coming your way. It rolled up over everything. It rolled uphill. It did come up over parking lots and took cars away in front of me. The first one receded back and took enough water to expose the sea bed.

It was a beautiful day. Clear, sunny, gorgeous. That's one of the reasons I parked my rental car so far away, so I would walk in. A meteorologist would have to explain this -- I think as a result of so much sea bed being exposed, it must be linked with the atmosphere -- it sucked this front down from behind us. This big, black ominous front came rolling down on us, so much so that it began to snow. I've never heard anyone mention the snow. I mean, it didn't snow and accumulate. But it snowed.

And the wind was -- it was like a vacuum going by. There's a harbor in front of Fukushima. And it was totally drained.

When the first wave came in, it just buried the walls to the plant. They were gone. They were all gone. The water just came in, wrapped around the walls and came back out. Units 1, 2, 3, 4 -- as everyone knows. It was just an ungodly amount of water.

We had a substantial amount of rental cars. We had no choice when they showed up. I think it was the police and maybe National Guard types that showed up, and said, you have to move south or west, and we were on our way. The freeway system was down. We had to take the secondary roads. It was a slow trip. We weren't the only ones headed south. There were a lot of people headed south. But there were a lot of people headed north, too. I saw a lot of people sobbing, in tears in those vehicles. Maybe they had family north. Who knows what they were driving into? I know I would have done it for my brother, for my sister, or my parents. I would have driven in the opposite direction to help them. It seemed like there were more cars driving in to the zone than there were driving out. But there was a lot of road damage, a lot of cracks in the road. A lot of landslides, a lot of fissures in the ground. We got there after midnight to the train station. Our company had a train chartered from Tokyo. We didn't get into until 4:30 a.m.

When I heard about the explosion on the turbine deck of unit 1, where I was working -- that came as a shock. We heard about that on the bus. Nobody said nothing. We just put our heads down. I remember thinking: Oh, not there. Not this place I was so connected to. You hear about these things happening in the world somewhere, but it really hurt. It hurt to hear that.

I had been in the turbine deck for unit 1 less than 24 hours before. I've read that unit 1 was the most badly damaged unit. I don't doubt that. I felt within the first two to three minutes of the earthquake that this was going to be significant.

This is the first time I'm telling the story in some kind of chronological order. It's not an easy story to tell. I'm struggling through it. I'm hoping that this helps me and my wife and my two school-age children. The holidays were difficult for me. I didn't put up decorations. I hardly bought any gifts. Maybe March 11 will help me get past it. I need a year.

The most important thing to me now is people. Like this morning I had a cup of coffee. I watched this exchange outside between two people who didn't know each other. They both had dogs. It was rather unfriendly and it seemed most unnecessary. That's just one tiny example in the world. I wish I could take you all by the hand and re-set you with me. That's what I feel like -- I feel like I've been re-set. Not that I was all that much trouble before. I've always been a decent man. But humbling -- that's the word I'm looking for. This has been a humbling experience. What's really important, you know?

As told to Alex Chadwick.

Carl Pillitteri is a nuclear technician who was working at the Fukushima Daiichi Nuclear Power Plant when the earthquake and tsunami hit.